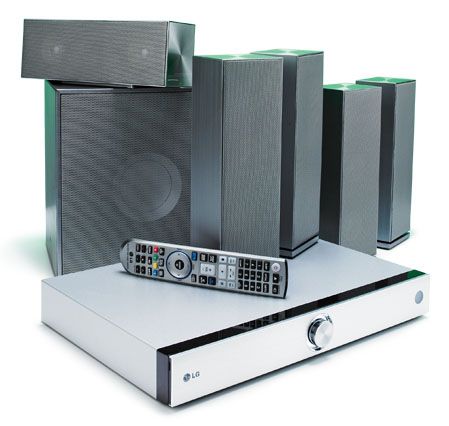 A premium price tag, but premium design and, mostly, performance too

It used to be to hard to get away from the fact that, with all-in-one home cinema systems such as this LG BH8220B, you were making compromises. Whether in terms of performance, features or build, when choosing a system like this it was a case of having to look hard for one not making too much of a trade-off in quality in return for convenience.

That’s very much not the case now: yes, the LG costs more than some rivals, but it shows in terms of build, quality and design.

The aluminium finish looks smart, and the main unit sets itself apart from the pack by not looking like a bloated Blu-ray player. What's more, the five compact speakers and subwoofer feel weightier than anything else here, too, imbuing a sense of durability often missing in systems.

LG has packed the BH8220B with a wealth of functions. Alongside Full HD 3D playback, there are two HDMI inputs, an optical digital input, analogue audio inputs on both phonos to the rear and a 3.5mm socket on the front, and a USB slot that’s ‘Made for iPod/iPhone’.

In addition, the USB port can be used to record from CD onto a memory device: you can do this in real time while playing a disc or, with the disc in 'stop' mode, at up to 4x speed. Gracenote look-up enables the LG to add metadata to recordings, which can be in 128kbps, 192kbps or 320kbps MP3.

If that's not unusual enough for you, the LG also has Bluetooth connectivity, allowing music to be streamed from portable devices or computers over a range of up to 10m.

Blu-rays are this LG’s main reason for being, and pictures are punchy and colourful. It looks at its best with brightly lit films or animated movies, when the level of detail is up with the best. There’s a hint of noise in some busy screens, but it’s an impressive picture.

It’s much the same with sound, although despite the physical weight and presence of the speakers, it’s this character trait that’s slightly lacking.

The centre channel is clear and there’s decent detail, but there’s a dearth of weight from the sub and a touch of hardness to some treble notes. There’s a pay-off for this, in speed and agility.

As well as Bluetooth, you can connect devices to the LG via a home network, either wirelessly or wired, and it can function as a DLNA client to stream content from a computer or NAS – a copy of Nero Media Home4 is supllied with the system to load on a home PC to create a media server.

In addition you can connect Wi-Fi Direct certified devices straight to the LG, without a home network.

LG’s Smart TV offering is one of the more thorough, and video performance is strong on iPlayer and YouTube.

As well as a smart remote control there’s also a new LG Remote app, which worked nicely on iOS – the Android version wasn’t working at the time of test.

We had high expectations for the LG system due to the price and the strong first impressions. It didn’t completely blow us away, but it’s certainly a versatile, sharp-looking package.

With smart TV and clean, clear sound as strong points, and with plenty of appeal for those with more than half an eye on looks, LG’s BH8220B system has plenty to commend it.

See all our Blu-ray in a box Best Buys