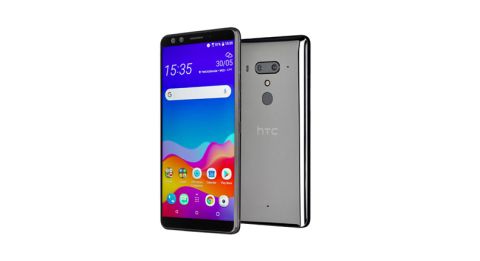 The U12+ won’t rock the smartphone world, but its ‘squeezable’ features and decent camera are worth a punt

HTC is done with chasing specs. For its latest smartphone, the HTC U12+, it simply wants to free you from the restrictions of using a touchscreen.

But if that seems counterintuitive for a smartphone manufacturer, HTC hopes its Edge Sense technology – touch-sensitive sides you can squeeze or tap to activate features – will tempt people into parting with £700.

The features can be genuinely useful, especially when trying to use a large phone with one hand, but we’re surprised HTC doesn’t seem too fussed about improving on the superb screen performance and audio talents we liked so much on last year’s HTC U11.

HTC has stuck with its glass body and ‘Liquid Surface’ design with layers of colour baked into the glass, so the phone looks different depending on how it catches the light.

Available in ceramic black, flame red or translucent blue, the HTC U12+’s chrome-like finishes are a fingerprint magnet, but look nice once you rub away the smudges.

The phone is a bit bulky, especially when compared with sleeker handsets such as the iPhone 8 Plus, Google Pixel 2 XL or LG G7, but it’s nice to hold thanks to the gently curved back.

However, when gripping the phone, we accidentally keep pressing the home/lock button. It’s pressure sensitive (rather than a mechanical button) and positioned on the side where you’re most likely to be holding the phone.

It’s very easy to activate it, which gets increasingly irritating when you inadvertently turn the screen off while playing a game or reading an article.

The volume buttons are similarly pressure sensitive, though much better positioned, and give a haptic feedback when pressed.

We like how the fingerprint sensor is positioned at the back, where your index finger will naturally rest. Face recognition is available for unlocking your phone, too.

And while the glass body makes the HTC U12+ a touch slippery, its IP68 rating means you’ve got an hour to save it if you drop it in water.

The HTC U12+ has a crisp and colourful screen, with app icons neatly outlined against vibrant wallpapers.

The Quad HD+ resolution (2880 x 1440) and 18:9 aspect ratio is standard for Android phones these days, and richly saturated videos and games look appealing on the 6in screen. It supports HDR10, but only on YouTube videos.

Black levels go pleasingly deep for an LCD, and the greens and reds of nature clips are vivid, if a little ramped up.

The natural tone we liked so much on the U11 isn’t replicated here, though. Rivals such as the iPhone 8 Plus offer a more realistic palette, greater subtlety and cleaner whites, while the Samsung Galaxy S9’s AMOLED screen has more exciting contrast.

We’d prefer the HTC U12+’s screen to be brighter, with greater dynamism and punch in videos – even reading text on websites would get a boost.

It’s not the best smartphone screen we’ve seen this year, but enjoyable enough for watching the odd episode and playing games.

The front-facing BoomSound stereo speakers have a claimed 50 per cent boost in volume. They go pretty loud, and there’s enough solidity and focus for playing short clips. We’d still use headphones for any longer periods, though.

HTC followed Apple in ditching the 3.5mm headphone jack in favour of a USB-C connection, which doubles up as the charging port. That’s fine, but we’re disappointed HTC hasn’t included a USB-C-to-3.5mm adapter in the box with the U12+.

Although HTC says third party adapters are commonly available, not all of the ones we tested worked with this phone.

The phone does come bundled with a pair of HTC’s USB-C in-ears you can use from the box. They fit comfortably, and the active noise-cancellation does a reasonable job of blocking the outside world.

You can calibrate the headphones to suit your ears but, while the adjusted sound is louder and a touch clearer, we find the top end biting too hard to be comfortable.

Switch to better headphones, such as the Sennheiser Momentum, and you’ll find the U12+’s sound is on the smooth side with a generous helping of bass. It’s an easy, undemanding listen, and there’s plenty of detail to keep you listening for hours.

That relaxed tone could have greater clarity, punch and agility – the iPhone 8 Plus, for instance, is a step above thanks to precise timing and more exciting dynamics.

The U12+ isn’t lacking in audio features, though. The phone also supports Bluetooth 5, aptX HD, DLNA, and playback of hi-res FLAC files up to 24-bit/192kHz.

Perhaps because it can’t compete with rival flagships on performance alone, HTC has poured all of its efforts into the U12+’s Edge Sense 2.0 features to offer you an alternative way of interacting with your smartphone.

Edge Sense is the ‘squeezable’ function we first experienced in the U11. Simply squeeze the bottom third of the phone to snap a photo, launch Google Assistant or Alexa, take a screenshot, open an app or more – you can choose which shortcut gets the honour in the settings.

You can also double-tap the sides of the phone to pull up the Edge Launcher – a roulette wheel of apps that appears from either side of the screen. We love the way it looks, and it makes it easier to select apps when using the phone with one hand.

It takes plenty of practice to get used to these actions and you need to squeeze firmly, or tap precisely, to make both features work.

It would also help if that hyperactive home button wasn’t in the way. The phone can sense when you’re holding it so it won’t dim or auto-rotate when you’re lying down, both of which are small but genuinely useful features.

With the HTC U12+ running on Android O with a Snapdragon 845 chip at its core, it delivers a zippy and smooth operating experience. Heavy use – watching videos, using the camera, keeping the screen turned on – drains its 3500mAh battery, which is only slightly bigger than last year’s U11.

The standard model comes with 64GB of onboard storage, but you can have more thanks to the microSD card slot – something that should ensure its popularity against rival smartphones without expandable storage.

The U12+ now has dual cameras at the front and back, with a returning bokeh mode adding a great depth of field effect to all pictures.

Optical image stabilisation and improved zoom functions ensure photos are in focus and sharp, while snaps taken in low light conditions have been given a boost.

The phone can record hi-res 24-bit audio, and has a nifty ‘sonic zoom’ mode, which focuses on the person being recorded.

Pictures are noise-free and clear, with punchy, vibrant colours and crisp detail. Colours are a touch ramped up – overly green trees and postcard-perfect blue skies are a giveaway – but it handles contrasts well.

The same photos taken on an iPhone 8 Plus have a more natural balance, but the HTC is better at taking photos at night. Its cameras pick up plenty of light in dark areas and enough detail to make them look impressive, if not entirely faithful.

HTC's new flagship doesn't push any new boundaries with its video and audio skills. It is outperformed by rival smartphones from Apple and Samsung that do a better job of wowing and entertaining us.

The U12+ may not be the best-performing smartphone this year, but its quirky features and good camera are great hooks for customers wanting something a bit different in this largely homogeneous smartphone market.

It’s a fun phone to use – apart from that damned home button – and well worth a look.