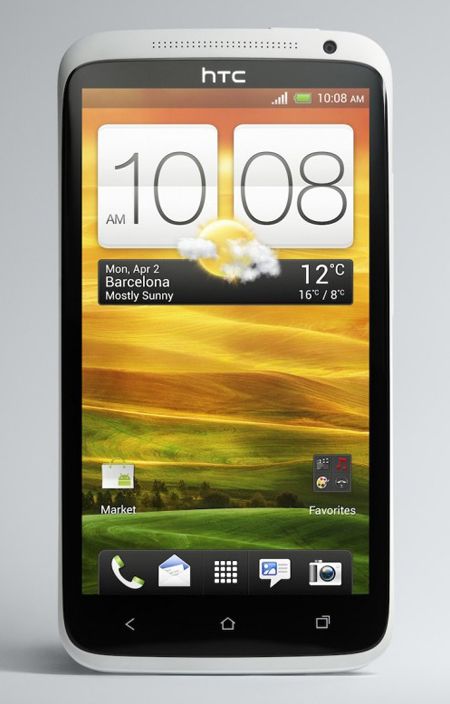 Bigger, better, faster, the HTC One X might represent the new industry standard

The HTC One X smartphone might just be the hottest product in tech right now. Smartphones (and tablets) are where it’s at, pushing the way we experience music, movies and more, and the One X is as exciting and powerful a phone as you can lay your hands on. It's a very smart phone, in other words.

As you’re no doubt well aware, while Apple's iPhone sells like no other mobile in existence, there are now serious alternatives.

The likes of HTC, Nokia, Samsung and Sony are delivering ultra-powerful, feature-packed new handsets, complete with stronger than ever incarnations of the Android and Windows Phone operating systems.

The One X smartphone is arguably the highest specification phone on the market and comes with the latest incarnation of the Android operating system, Android 4.0 – otherwise known as Ice Cream Sandwich. Get excited.

HTC One X: Build and design

As is the fashion, HTC has opted to give its new flagship phone a few more inches. A 4.7in screen means the One X is over 13cm tall and nearly 7cm wide.

Despite this, and all the power inside, it remains incredibly light at just 130g, making it a fraction lighter than the Sony Xperia S and 20g lighter than the Sensation XE, both of which have less generous dimensions.

So while your hand won't be straining under the weight, using this phone is certainly more of a two-hand job than Apple’s iPhone.

The pay-off is the amazing screen. The 4.7in, 1280 x 720 HD display fills most of the phone's, with only a small trim around the edge and top, plus room for the three fixed touch controls at the foot of the device (back, home and recent apps).

You'll only find two physical buttons: one on the top for turning the screen on and off and one on the side for adjusting the volume.

The standard mini-USB and headphone connections are the only other points of interest around on a device that feels great in the hand thanks to a matt grey finish to the back, which smartly offsets the black, glossy trim around the screen.

HTC One X: Accounts and services

Get cracking with the HTC One X and you're instantly greeted with a flash of the Beats Audio logo.

After HTC bought a majority share in Beats Electronics last year, Beats Audio rolled out across a number of HTC handsets last year but the One X takes it further with the Beats Audio listening mode (which you can turn on and off) extended to include apps such as Spotify – previously it was only for your own music in the phone’s library.

And that's not the only partnership: you'll also be offered 23GB of free storage on Dropbox, a cloud-based storage client that allows you to store any type of file or media across multiple computers and platforms.

Rather neat it is, too, boosting the 2GB free allocation to a mighty 25GB (for two years) on top of the 32GB internal storage.

The integration allows you to quickly and easily save images and videos to your Dropbox folder making for a neat, easily integrated on-the-fly cloud service.

The HTC One X has the latest Android 4.0 OS, with HTC Sense adding some individual flourishes. And we like it. The quad core processor makes moving around the phone rapid.

Endlessly customisable, you can choose which apps to have as you main shortcuts at the bottom of the screen, alongside which you have a total of seven full screens to fill apps or widgets.

Widgets allow you to get quick access and information to apps on your phone such as Music, Mail, the weather and much more besides. Alongside the mesmerising live wallpapers it makes for an involving experience.

Like a good website, it’s easy to access the various parts of the phone from another area. A good example of this is the Music tab. Not only can you see all your tunes but there’s room for other apps allowing you to instantly jump from your own library to TuneIn Radio or Spotify.

Talking of websites, the HTC One X is superb when it comes to web browsing. Again, it’s all about making the most of that screen size and the quad core processor, which combine to make the experience both easy to read and navigate, and incredibly quick.

Pages format nicely in landscape or portrait, the scrolling speed and feel is just right and text is sharper than on almost any phone we’ve seen.

HTC One X: Apps and accounts

Getting started and you’re prompted to sign-in to as many accounts as possible, from Gmail to Dropbox to Google Play and HTC Watch. None are ultimately essential though you’ll certainly want a Google Play account.

This is the new name for the Android Market and the place to find apps, books and movies. Of course you’ll now find pretty much everything essential on Android, from iPlayer and Angry Birds, to Facebook and Twitter.

Get serious on games and motion holds firm, colours look good and the super-fast processor means there’s no hint of lag. Which all bodes well for watching TV and movies…

Video on the HTC One X

You can rent films in SD and HD, from theoretically as little as 99p, though in reality the majority of films will set you back £3.49 for SD or £4.49 for HD. There's Google Play's standard movie service, which only offers rentals, or you can use HTC Watch, which is HTC’s own movie service to buy or rent.

The search works better on HTC Watch thanks to auto-complete suggestions and there’s a choice to rent or buy for on average £3.49 or £9.99. There’s no sign of HD content but there are some decent films, Team America for example, in the 49p ‘Cheap Laughs’ section.

The huge screen makes a mockery of smaller rivals such as the iPhone, grabbing your attention with bright colours and impressive contrast and dynamics. There isn’t quite the absolute detail and sharpness – but being 1.2in bigger than the you-know-what, that’s maybe no surprise.

Supporting AVI, MP4 and WMV files, for video it’s a winner, though still video on Android is strangely tucked away.

Finding your own video content either requires going via the Gallery, where you also get your photos, or via a menu tab slightly hidden within the Google Play Store. Strange – we guess they’d rather you buy video content, which HTC makes a lot easier…

There’s DLNA on board so you can stream to a compatible device, while a microUSB to HDMI cable will allow you to connect straight to a TV – HTC doesn’t supply one free, however.

Also not free but coming soon is the Media Link HD, which will allow for wireless streaming to any TV with said box connected.

With AAC, FLAC, MP3 and WAV files supported, you shouldn’t have an issue slapping your own songs in to the library.

The new-look Music tab is smarted and allows you to link directly to apps such as Spotify, Tunein Radio and the heavily integrated Soundhoud app – a Shazam-like music recognition and information service.

Beats Audio kicks in on any music outputted through the headphones – not the speaker – and adds its usual bass weight and ‘rock mode’ feel.

We’d rather turn it off at which point the HTC One X sounds good. It gives away a little detail to the likes of the iPhone and the Sony Xperia S, but it’s only a little.

As well as DLNA streaming you’ll also find aptX Bluetooth for superior streaming music quality – and it is – which is a bonus.

No headphones were supplied with our handset but it appears the One X won’t come with Beats headphones unless you pay a premium. The choice is yours on that one but we’d advise you take the freebie offerings and upgrade to something better in your own time.

HTC One X as a camera

An 8MP camera on the back of the phone is joined by a 1.3MP option on the front. Stick to the rear camera and you can take some very nice pictures indeed, not to mention shoot 1080p content.

Handily, you can combine the two: while shooting video just press the shutter button to take a still snap. Another clever little addition.

Again, the Dropbox integration comes in handy here, allowing you to share and save your photos to the cloud in a couple of presses.

Last but not least, the microphone and speaker prove more than adept for calls, which sound clear and balanced.

A weekend’s use found mobile use reliable, though the battery life proved a little more underwhelming. Most smart phones disappoint it has to be said but heavy use of the HTC One X and you’ll be lucky to get a day’s use.

The likes of the iPhone 4S and Samsung Galaxy S II aren’t much better, but if you’re borderline addicted to using your phone out and about for browsing the web, streaming music and more, it’s something to consider.

HTC One X: the verdict

We like the HTC One X. We like it a lot. The chassis feels great, the screen looks brilliant and the interface and OS is a super-fast dream of an experience.

Dropbox and Beats Audio integration is nicely done and, certainly in the former instance, very useful, while music and video performance, while not absolutely class-leading, is right up there.

With a warning note against the battery life, which could annoy hardcore users, the HTC One X is nevertheless a serious contender for the best smartphone around. Bar none.