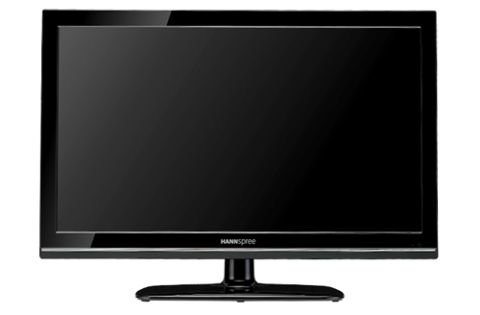 Best 22in TV, Awards 2013. A shining example of tiny TVs and proof that cheap doesn’t have to mean rubbish

Hannspree has a reputation for making crazy products. If you ever fancied a TV the shape of an apple or a basketball, you’ve got the right brand. In fact, we quite like the idea of the ‘HANNS polar bear’.

We were mildly saddened to learn that we were being sent a more traditional unit: the Hannspree SL22DMBB is a black rectangle on a black stand.

Connections are fairly standard. The Hannspree SL22DMBB has one each of HDMI, Scart, component, composite, VGA and USB inputs. Unlike some of its rivals, the Hannspree doesn’t have a built-in DVD player. Plug in a USB stick, however, and you can record TV.

But none of that really matters in the face of impressive picture performance. As soon as we’re done tuning and calibrating the TV, we land on ITV’s This Morning, where some kind of fashion show is in progress. Colours are punchy and nicely judged.

There’s plenty of subtlety, with good variation in shading. The level of detail is good, and there’s a clear sense of texture to fabrics. Contrast is strong, but not overdone. This is a good tuner, even if it’s SD only.

Onwards to DVD, and we load up Star Wars. The Hannspree has no problem juggling light with darkness. A less capable screen would make a mess of the iconic opening scene, letting the expanse of black swallow up all the stars in the background.

Not here: as yellow words scroll onto the screen, the galaxy far, far away manages to twinkle.

We skip forward to see Darth Vader taking over a rebel ship, and are pleased with the whites on display. They could be a little stronger, but we’re happy with the colour balance – the Stormtroopers’ white armour looks bright enough.

Our findings are consistent as we switch up to Blu-ray. There’s a jump in detail resolution, of course, but the screen’s characteristics stay the same. We’re impressed by the natural colours and strong contrast.

Full HD film material looks lovely – sharp and crisp without being over-etched. Watching Skyfall, it’s hard not to be impressed by the little things, such as the lines on Daniel Craig’s face. The Hannspree maintains an iron grip on motion, making the most of the film’s fluid photography.

Even the sound is decent. It’s still small and thin like nearly every flat-screen TV we’ve tested, but it’s not hard and scratchy. We'd still advise you peruse our list of best soundbars...

The lack of a built-in DVD player puts the Hannspree at a disadvantage compared to many TVs this size, but we’re not that bothered about it: if having fewer toys means a TV is capable of putting out an impressive picture, we’re all for it.

This TV may be light on features, but it excels in its performance, which is what really matters. If you want a small, no-frills TV at an affordable price, this Hannspree SL22DMBB is an excellent choice.