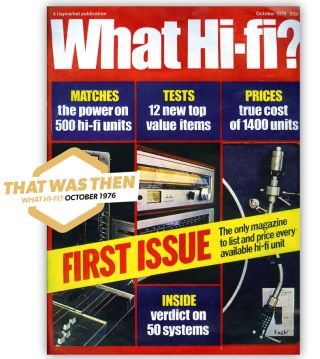 And there’s no denying it: in October 1976, when the first issue of What Hi-Fi? arrived in newsagents, the UK was another country.

Those old enough to remember the first Ford Fiesta, The Brotherhood of Man or James Callaghan don’t need me to remind them that what passed for modernity in 1976 wasn’t always, frankly, at the cutting edge of anything.

But it’s true, 1976 also saw Concorde’s maiden flight, The Sex Pistols achieve nationwide notoriety thanks to the feckless Bill Grundy, the first Muppet Show and the two Steves (Jobs and Wozniack) launch their computer company Apple – this is the kind of pioneering spirit we’d like to associate with What Hi-Fi? rather than The Best of The Stylistics (the UK’s Number One album at the time the magazine was first published).

That first issue cost 35p at a time when a pint of beer cost 32p (and our current cover price (£4.99) is more-or-less comparable to a pint now). And, like every single issue that followed it, the first issue sought to be an impartial and trustworthy guide to the best way to get value for your hi-fi money. Beyond that, mind you, it has undergone quite a number of changes.

There was very little colour in the mag, for instance – and what there was inevitably attached to adverts rather than editorial content. And there were so many adverts: from manufacturers still going strong and from those who’ve fallen by the wayside, and from a huge number of hi-fi retailers (it seems every sizeable town had a least a couple of independent dealers). The idea that a company could sell electronics using an image of an inviting woman in her scanties was pretty widespread, too.

And just as the ads reflected the times, so did the editorial content. Turntables still ruled the hi-fi roost, of course, so the comparisons of decks, arms and cartridges was widespread. Cassette featured heavily too, both in terms of decks and cassettes themselves – if you wanted to know about variances in wow and flutter between brands, What Hi-Fi? had you covered. Music centres (remember them?) got a look-in too, as did the first of the exciting new Video Cassette Recorder machines. There was a Sound & Vision element to What Hi-Fi? from the very start.

MORE: A look back at the first What Hi-Fi? Awards

From there on, the magazine simply evolved to reflect the tastes, preferences and requirements of its readers. Digital audio started to come on strong at the beginning of the 80s, and by the middle of that decade, the all-conquering Compact Disc was making significant inroads into vinyl’s dominance – the idea that the future was small and shiny, rather than cumbersome and easily damaged, was pervasive.

Tests of groups of turntable cartridges dwindled, replaced by phalanxes of CD players – and a little later, CD recorders. The writing was on the wall for compact cassette too (although reviews of in-car entertainment continued unabated. This was a time when the demand for after-market in-car radio/cassette players, preferably with as many buttons and lights as possible, was strong).

What didn’t change for the first 20 years or so were the extraordinarily picky and opinionated reviews of software. LPs, and later CDs, were reviewed with one eye on sound quality, of course, but an equal emphasis on what could be described as self-conscious ‘authenticity’: Supertramp? Yes please. Prince? Oh we’d really rather not.

MORE: From CRT to VHS - the tech that got left behind

And as technological advance followed technological advance, What Hi-Fi? simply adapted accordingly. Through DVD – still the most successful and rapidly up-taken Big New Thing in home entertainment history – and the revolution in television viewing, heralded variously by plasma and then LCD technology, Sky, Freeview, successive Playstations and the like, the ethos has never changed. Products were, and are, reviewed by a team, in a controlled, expensively-specified environment, and comparatively, with no consideration other than sincerely assessing the value for money they represent.

And that’s true of the cutting edge of today’s technology, be it high-resolution audio on disc or via download, 4K television and Blu-ray players, audio and video streaming services, ever-more-capable smartphones or the through-the-roof market for standalone DACs and high-end, high-performance headphones.

No one can predict the next technological breakthrough of course, but whether or not the future of your home entertainment is an intangible, cloud-based subscription service, OLED TVs so thin and flexible you can roll them up like wallpaper or – let’s not rule anything out – the enduring and unquenchable lure of vinyl records, What Hi-Fi? will be there to make sure you’re getting absolutely top value for your money.

MORE: The top 40 What Hi-Fi? products of all time