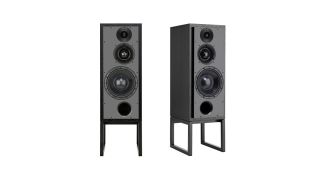 Resurrecting our old, dog-eared A-Z from the glovebox (we've had it marked up by a local resident – most satnavs will direct you to the nearby airfield) we take a turning and find ourselves on the rural, unpretentious road named Gypsy Lane in Stroud, Gloucestershire, England.

We disturb the chickens as we switch off the engine – it's 10.30am and far too late for arrivals, after all. On a sunny day, when ATC engineers might fling open the doors to the prototype workshop (the one with a classic car chassis belonging to founder Billy Woodman hanging from the ceiling) these feathered residents pop in to make sure everyone's working hard enough.

They are though. ATC's reception leaves us in no doubt of this – the walls are chock-full of images of artists (Tom Petty, the Rolling Stones) and venues (Sony's SACD Studios in New York, Wigmore Hall, London, the Walt Disney Concert Hall in Los Angeles) all of whom faithfully use its speakers. Make no mistake: this is proper high-end hi-fi.

We're here to witness the manufacture of our long-reigning reference speakers, the agile, transparent and dynamically honest ATC SCM50 speakers. And what better excuse to make the trip than during British Hi-Fi Week?

Our guide is technical sales manager Ben Lilly, an ATC veteran of 16 years. He laughs when we congratulate him on his tenure, though. You see, things are slightly different here. Here, a mere 16 years still makes him relatively green.

Ben reckons that since their 1985 introduction, around 3,500 pairs of SCM50s have been made to order – and demand for the 50s (and for their bigger SCM100 and SCM150 siblings) is only going up. All drive units in the three-way model are designed and built in-house, under this roof – a rarity indeed.

We begin with the hand-pressed and assembled voice coils. You simply can't buy the machine (pictured, above) that'll produce ribbon 6000th of an inch by 3000th of an inch out of fine copper wire: this unique 1974 contraption was made by Billy's brother. A dedicated engineer still feeds wire into it today. A lot of extra work, no? Reduced heat and greater efficiency within the coil's usable surface area is the name of the game here, and finessing the very roots of its drivers pays dividends.

These are tiny differences, but when it comes to performance they'll be amplified, quite literally. We mention this, and Ben smiles: "We don't make massive claims in terms of power, efficiency, frequency range or amplification. We always try to promise less and deliver more."

It's a statement backed up in numerous threads across various hi-fi forums. On seeing this laborious and time-consuming process – a process few have seen, let alone understand – we're fully onboard.

Vanessa Mayo, her nails shimmering as she works on a midrange mandrill and secures the coil with needlepoint precision, somehow manages to talk as she works. "I'm into my 35th year at ATC," she offers mildly, with all the humility of someone who actually only started last week. She glances over at her workload: "These have been in the oven and then rested overnight."

We mention that it doesn't look easy. She laughs. "There are no half measures here. Everything is tested and has to pass within its parameters at every step of the process" she says.

Ben suggests that 'Nessa might have completed at least 15,000 units by now. She laughs again, "Oh, and then some!"

We attempt to handle the ribbon 'Nessa's working with. It is so fine that our fingertips can barely feel it, even as we squeeze our thumb and forefinger together.

On into midrange dome and software assembly, which is Hugh Burston's domain. The delicate, highly-specific, fabric dome tweeter and midrange diaphragms (or 'reindeer noses' as the latter is affectionately known) are the only parts that ATC orders from a dedicated supplier – and the margin for error on hand assembling these is mind-bendingly small.

As Hugh demonstrates the various procedures within his remit, it becomes clear that one small error – if the two coats of protective polyester haven't been fully removed to expose the ribbon's metallic ends before soldering, if he lapses into a nanosecond of heavy-handedness with that fine glue nozzle – and a midrange driver can fail to make it to the next stage of assembly. And that would almost certainly mean starting again from scratch.

We remark that he must have an eye for detail. "Oh, I can tell who papered these coils as soon as I start work," he confirms. "Everyone has their own characteristic way of finishing them, little flairs in their work."

Hugh says he can complete 40 midrange drivers in an average week, "or 60 on a very good one". On his particular role, he adds, "I like that the whole process is mine. I test it before it leaves me – that's all on me."

Bass drivers in the SCM series vary greatly in size, but here Toby Keogh is at the helm, one of the very cornerstones of ATC's foundations. "After 43 years here, they've put my name on my T-shirt. It's so I don't forget it!" he says wryly. Toby tells us that he wanted a career change after working in a Scotland shipyard, so he "had lunch and an interview over a few pints with Billy (ATC's founder) in the pub in 1977. The rest is history."

Ben adds, "Any ATC speaker that comes in for service, anything at all – a custom install, a prototype, an anniversary edition we only made three of – Toby will know about it and almost certainly have worked on it. That level of hands-on expertise is irreplaceable."

We ask Toby if he still loves his work. Toby's smile is shy but his reply is quick and confident: "I've got two more years 'til retirement, but then I'll be stood outside, looking in through the window, watching them do it and probably wishing I still was. I mean, who else can say they did Live Aid?"

We ask him if much has changed here since he started. "We're a bit bigger," he answers, "But not much." Raising up a cautionary finger, he says, "You can't let the quality dip."

Ben agrees. "It's a conscious decision Billy had to make at some point in the '80s. Did he want to upscale and risk losing this level of workmanship, or did he stay here? He chose to keep things largely as they are."

We can only add humbly that we think Billy chose the right path.

We're about to see a weighty chunk of shiny black metal being magnetised. At ATC, it's like a scene straight out of the 1971 movie Willy Wonka & the Chocolate Factory. Apparently there is a newer magnetiser which is gradually being phased in, but we'll be seeing the original class of '74 machine.

Charlie, our suitably steampunk-styled engineer drops the inky disc into its waxy basin and pushes no fewer than nine buttons in sequence, all of which light up on command. Then, a buzz. We wait. It's intense, like the moment before Willy Wonka reveals the Everlasting Gobstopper.

Charlie retrieves the part from the magnetiser. He grabs a wrench. It practically leaps from his hand, attaching itself to the newborn magnet with a vice-like grip. We feel like breaking into applause. We feel much like a certain boy in Willy Wonka's factory (also named Charlie) did, on his wondrous factory tour.

Once the ATC SCM50 midrange driver is assembled, it goes into the quality control room. Here, its sonic performance is tested against a "golden" or reference driver. It must fit within certain parameters on the computer-generated graph to pass – and go into an ATC product.

As the driver is fitted dome-first into its big blue testing box, which holds the testing microphone, we realise it's the first time we've seen a computer since we've been here. We hear a surprisingly eardrum-awakening set of frequencies. Thankfully, the driver passes.

Since 2014, ATC has been making its tweeters in-house. The company took a long time to get the recipe right. "Oh, I'm very protective of my tweeters," Chloe Griffiths tells us, as she sets about assembling and testing one. She is the only member of staff in this tweeter room; the entire task is hers.

"I had my 19th birthday here. That was 11 years ago" she continues, spinning the tweeter on its workbench, applying an indescribably thin line of glue and adding "Oh, I bet I'm going to shake now!"

She never does. She's also able to make up to 140 of these per day, although she concedes that if you include testing (there's a mini version of the blue box tester next to her) it's probably more like 100.

We venture that we wouldn't trust ourselves to hold steady. Ben confirms this: "Here, there's little margin for physical error. A fraction of a gram of glue in a midrange driver might be of little consequence. Here, it could mean the whole thing fails."

In another room, circuitry boards comprising the three amplifiers found in the active version of the SCM50  are hand-cut, soldered and (after resting) meticulously tested on one of three machines that wouldn't look out of place in Doc Brown's garage in Back to the Future.

Here, all passes are noted and recorded by hand on well-thumbed ledgers.

ATC enclosures are built by a carpentry firm barely 20 miles away, in the neighbouring market town of Tewkesbury. Ben tells us they're delivered two or three times per week, depending on what's needed and in production.

We're in the slightly more spacious yet still modest final assembly room. In its centre, two pairs of SCM50s and a set of larger SCM150s are finished and awaiting dispatch. We're told that two pairs are headed to Hong Kong, one is off to the Unites States.

Along the far wall, several ATC SCM40A cabinets are being given a set of drivers.

In another corner, an engineer is hand-stretching and stapling the SCM50's fabric grilles. Clearly a seasoned upholsterer, he pauses to test one finished speaker for the last time. It is elevated, with the microphone roughly two feet in front of it. The frequencies are relayed and the results checked; a happy pass. He continues to add damping to the body of its future partner.

The best pot of tea we've had in some time is proffered, with a plate of top quality biscuits. It's Friday – there may even be wine later if we're interested? Sadly, the M4 motorway awaits.

On our way out, we happen upon today's time cards. ATC still works on a punch-in, punch-out analogue attendance system. And why change it? Companies boasting extensive online payrolls in far flung, glass-fronted, air-conditioned headquarters are coming all the way out here to seek ATC's expertise.

Purchase a set of excellent ATC SCM50s and you can rest assured that Vanessa will almost certainly make the voice coil, Hugh will take care of the midrange driver, Toby will assemble the bass unit and Chloe will fashion the tweeter. These highly-skilled team members offer a combined experience of 92 years, all funneled into one product – and that's just for starters.

The familial feel at ATC is unique and wholly likeable, but we aren't fooled. Our visit is underpinned by the notion of something far stronger: assurance. ATC knows full-well what it's doing. And it does it very well indeed.

The making of: Rega Planar 3