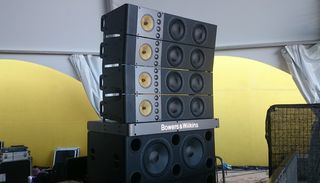 The Bowers & Wilkins Sound System was born out of a desire to take hi-fi quality sound to the live music experience. And it certainly makes a statement.

If the Sound System was to be made available commercially, B&W says it would cost in the region of €1 million. No wonder people were queuing to get to the stage...

This year’s Primavera Sound saw the second incarnation of the system following last year’s well-received debut in the same spot. But it turns out this is strictly speaking the third generation of what was for a long time a secret B&W side project. The first system was strung together in B&W engineers’ spare time as a hobby project in the mid-90s.

Laurence Dickie, designer of the legendary Nautilus speakers, helped build drivers and speakers to form the original system which, once the B&W team had had its fun, eventually found its way in to the hands of local party promoters, Innerfield Sound System.

So if you found yourself dancing in a field in the south of England in the mid-90s, you might just have heard it…

This time around it’s an altogether more polished affair, having been used at last year's Primavera and WOMAD festivals, and now, having been tweaked and fine-tuned, set to do more festivals and live shows in 2015.

The Sound System is built in-house and uses a whole host of core B&W technologies. First, there are double dome tweeters, as seen on the latest B&W 600 Series, which aim to help reduce distortion.

Decoupled tweeters improve resolution and help keep vibration to a minimum. This is crucial when you’re cranking out a system that’s capable of hitting 120 dB - which would be a bit like standing next to jet engine (not that they’d ever turn it up quite that loud, of course…).

There are carbon Rohacell cones on the low midrange and subwoofer drivers, with both using the same motor system as on the 800 Series, too.

The bass units use customized 15in versions of the Rohacell drivers found in the company’s £67k CT800 system, and use Flowport technology for the ports, the dimpled design helping the air to move more efficiently and silently (in a similar way to a dimpled golf ball), reducing noise and keeping the bass sounding tight and punchy.

They also have Matrix bracing inside, as used on the 800 Series and then reimagined on the T7 wireless speaker.

What’s clear, is that while this may seem like a long way from a set of hi-fi speakers, the B&W Sound System is every bit a Bowers & Wilkins product – just turned up to the max.

The end result at Primavera Sound 2015 was a system that combined four Sound System stacks, each standing 3.2-metres tall.

It’s perhaps no wonder then that people queued to hear DJs and electronic music artists at the Bowers & Wilkins stage, despite the festival's indie-rock roots.

Curated in tandem with Resident Advisor and Red Bull Music Academy, punters were treated to live performances and DJ sets through the night, from relative superstars on the scene, such as Daphni, Dixon and Maceo Plex, plus an unbelievably packed house for hometown hero, John Talabot.

This was accompanied by a visual show that cleverly spun animations of speaker drivers and headphones on to the walls and ceiling of the room. You’re never far away from some subtle branding.

And if the sensory overload down the front was a little too much, pairs of AM-1 waterproof speakers (below) kept the party going, albeit at a lesser volume, outside the dome.

So how did it sound? Seriously impressive.

While the B&W engineers were keeping a watchful eye with real-time analytics on the system and heat sensors for the drivers, and there was some predictable last-minute tweaking and the odd bit of gaffer tape, it was impossible not to be impressed by the sound.

And it was clear the feeling was supported by a packed room of punters and performers alike, as artists such as Jon Hopkins made a beeline from appearances on other stages to come and hear the B&W Sound System.

B&W sees the key areas of improvement over existing PA systems being the level of clarity throughout the frequency range, and the noticeable depth and control of the bass.

While some club systems may shake your trousers and hit you in the chest, often it’s fairly loose, flabby bass - a sense of power over pure sound quality. Here, the system delivers real bass depth and with it serious weight, while maintaining that punch necessary for dance music.

B&W is happy its system delivers tight, controlled bass well under 80 Hz that you can really feel - and won’t always hear on other systems (we'd naturally assume the likes of JBL and Funktion-One may disagree...).

Those low frequencies, B&W says, are the real the foundation of the Sound System.

Some DJs spun vinyl, others used CDs and others even MP3s, which to our surprise, one B&W engineer said he didn’t have much of a problem with, provided it was “a good MP3” (though the sound crew certainly pulled some faces and had to do some manual live adjustment to certain frequencies at that point).

But it was clear the best produced tracks were capable of sounding super-clean, clear and powerful, noticeably so for this sort of environment.

Moving to other stages - albeit far, far bigger ones, with huge rigs facing out to thousands of people - it was obvious how hard it can be to get that clarity and control across the frequency range.

More realistic comparisons to club sound systems also show how distortion and muddy frequencies can be tiring for your ears, let alone your feet. Even at high volume, the B&W Sound System sounded, to our ears, far more comfortable.

You don’t have to take our word for it, plenty of the artists who have played on the B&W Sound System have waxed lyrical about the sound. And they weren't, we assume, just being nice for a free pair of headphones.

Local boy done good, John Talabot, who was one of the biggest draws at the festival, said: "Last year Sound System was amazing so when they said this year there is another chance to play it I said 'yes yes yes'. The Sound System is straight - it is really warm and punchy."

While Dixon, currently one of the biggest names in the underground house music scene, commented: "Very often people make things louder and louder and louder. Everyone tends to do this. But a good sound is not just loud but everything is there, and when you leave the club you are not bleeding at the ears - and this is what you can achieve on a system like this."

Thurston Moore, singer in Sonic Youth, also came to hear the system - and liked what he heard, saying: "Bowers & Wilkins' Sound System has more to do with an appreciation of what an analogue signal delivers."

And of course it needn't just be used for dance music, nor just in club venues.

Proving that point, the B&W Sound System will be making a special appearance for a Jamie XX gig at St John’s Church in East London this Friday 5th June.

It will be the system's first London outing, with The XX frontman sure to give it a different kind of workout in a wholly different environment.

This will be followed by further festival outings at WOMAD in Wiltshire and Øya Festival in Oslo, Norway, later this year. There are also rumours that something may materialise in September, so watch this space if you want to hear the system for yourself.

Following on from the McIntosh DESPACIO system, which brought a Mcintosh hi-fi-powered system to various clubs around the world, and B&W's own experiments with Björk, it seems hi-fi may be moving from home listening to house music, and beyond.

And if it sounds anything like this, then we think that's a good thing.

See all our B&W news and product reviews