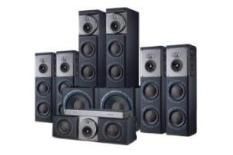 Expensive, of course, but you get the best home cinema system we’ve ever tested

Yes, this does cost nigh-on 70 grand. And that's before you add enough power amplification to drive this seven-speaker, three-subwoofer system: B&W recommends you use Classe kit, which it also distributes (and which isn't cheap!).

You'll also need a surround processor, some cables, a source or two and a projector with screen. Oh, and there's also the small matter of installing the whole shebang, ideally in its own dedicated listening room. So, the final pricetag? Let's say ‘lots' and leave it there…

But then some people think Bentleys and Breitlings are worth the money: as home cinema enthusiasts, we're just delighted that B&W's CT800-series system exists.

It's been developed to deliver the ultimate, cost-no-object sound quality, and after an extended testing process, we're happy to report that it delivers: we've certainly never heard a home cinema system (or, indeed, any cinema) to better it.

Everything it relays sounds so effortless. Granted, our test system used three of the massive CT8 SW subwoofers (each with a 15in bass driver, and each powered by its own Classe amp), but even so – for sheer dynamic reach, it's hard to imagine anything more thrilling than this.