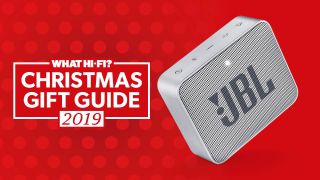 Christmas stockings once meant children got a lump of coal for luck, vitamin C in the form of an orange and, if they were really fortunate, some marbles or a clothes-peg doll. Fast forward to the age of internet shopping however and the words "stocking" and "sleeping bag" might easily be interchanged, and even your cat is expecting his or her jumbo haul of treats and toys.

And we're OK with that! Seeing the ones you love dig out each small, thoughtful gift on Christmas morning is one of life's great pleasures and is probably why the centuries-old Christmas stocking tradition persists. So let's get down to brass tacks (not literally) and point you in the direction of some quality but affordable stocking-fillers. It's much like aiming for Christmas dinner to be on the table by 2pm: preparation is key, and its never too early to start.

Hit Factories: a Journey Through the Industrial Cities of British Pop

Upon discovering a derelict RCA record pressing plant on the edge of the A1 motorway near north-east England's Gateshead, Karl Whitney pockets four of the factory's old floor tiles. He imagines David Bowie's steps across them when the singer visited the plant to cut a cake and sign his first record deal, the glorious – and platinum – Hunky Dory of 1971. Those floor tiles become Whitney's stepping stones on a journey that explores the industrial cities of British pop music and the sounds that shaped them.

For vinyl-lovers and anyone interested in the music industry's fluctuating grip on the physical product, 2019 release Hit Factories largely avoids the well-documented London music scene and instead sheds light on the historic soundscapes of Leeds, Manchester, Liverpool, Newcastle, Sheffield, Hull, Glasgow, Belfast, Birmingham, Coventry, Bristol and more. An insightful and provocative read from the author of Hidden City: Adventures and Explorations in Dublin.

If someone on your Christmas list is looking for a new set of in-ear headphones, how about writing this pair of What Hi-Fi? 2019 Award winners by their name? Yes, £40 ($40) or thereabouts represents top-end stocking-filler for us too, but on the other hand, it is a very reasonable price for a five-star award-winning set of wired earbuds.

We tested the SoundMagic E11Cs in 2018 and have loved them ever since. They remain unbeaten in the category, and the feel here is altogether premium.

OK we'll level with you: the idea that your recipient might initially believe this little Bluetooth speaker to be a bar of soap made us want to include it all the more. But don't let that put you off! The JBL Go 2 is a lovely little performer for the money.

Our only real gripe is the relatively short five-hour battery life, but with a well-balanced sound and 14 beautiful colours to choose from (our favourite is still this retro, pearlescent mustard hue) this diminutive speakers is a great shout for sonically enhancing the home of someone you love.

Every so often the stars align, the ascension of a band beautifully coincides with a suitably notorious venue and the resulting gig is nothing short of astronomical.

If the person you're buying for missed the one-night-only cinema release in 4K and Dolby Atmos, don't fret. The full live show is being made available for the first time internationally across 3 LP Deluxe, 2 CD and all digital formats on 15th November. The performance features the hits Need You Tonight, New Sensation, Devil Inside and a track previously thought to be lost, Lately from the album X – all newly remixed in 2019 by Giles Martin and Sam Okell at Abbey Road Studios.

The CD format features unseen imagery from the show, new essays from the band and sleeve notes by broadcaster and INXS super-fan Jamie East, in the crowd that night. Buy it so they can hear the crowd sing along to Hutchence's almost disbelieving vocal and experience what a truly great night at old Wembley felt like.

Because if you can't make the most of your 4K home cinema over the Christmas period, when can you? From director Todd Douglas Miller (Dinosaur 13), this cinematic event is 50 years in the making and a required addition to any Blu-ray collection. A freshly discovered vault of 65mm footage interspersed with more than 11,000 hours of uncatalogued audio recordings take us straight into the beating heart of NASA's Apollo 11 mission – the one that put the first men on the moon.

If you haven't seen it, there are periods when the tension is almost unbearable – and it's all real. Neil Armstrong and Buzz Aldrin became household names in 1969, but here you feel as if you actually get to know them. Even Michael Collins (the astronaut you've never heard of) is finally given his moment to shine. The sweeping shots of spectators waiting silently on the ground are brilliant on so many levels, and when you see the technology available – basic at best by current standards – you marvel that such a feat was ever achieved.

Yes, they might have the most up-to-date smartphone on the market, but they can still give it a dash of passive electromechanical 1940s charm with this volume unit meter case, and protect their device to boot. These charming, relatively inexpensive cases can be ordered to fit most models and, for an extra few pounds, you can even opt for the case to glow in the dark – handy for those times when they've switched their phone off at the cinema and then can't find it to book the Uber home.

Handmade from 100 per cent felt (just as hip-hop guru Grandmaster Flash advocates), these designs are printed with vinyl flex and then heat transferred onto the slipmat, a technique that promises not to damage records when the DJ in your life sets about slip-cueing, beat-matching and scratching.

Perhaps the best thing about them though is that whether or not they're used to help records 'slip' on a turntable, they convert decks into works of art when the plate-spinner is idle. Other designs include an Andy Warhol's Velvet Underground banana or The Great Wave of Kanagawa. This Escher design remains a firm favourite for little over a tenner.

Whether you're en route to Bali or the nearest bar, no one wants to get caught short with a 2 per cent battery. Does your beloved have an iPhone, Samsung Galaxy Tab, true wireless earphones, MacBook Air or a UE Bluetooth speaker? Chances are they have at least two of these, and thus, this super-handy. 30cm three-in-one charging cable will be invaluable. Your giftee need never get annoyed with themselves for forgetting a particular juice-supplier again – worth its weight in gold when you're in need.

Depending on how icy they like it, their drink of choice could soon contain a squadron, a flotilla or even a whole fleet of happy little submersible ships – a stone-cold smile inducer. Look, it's a bit of fun for £6, isn't it? Who, on hearing that sublime Beatles song for the first time, didn't bob along happily and genuinely consider running away to find their own sea of green? Exactly.

"Oh great, another mug". Yes, well that's clearly the exclamation other, lesser hot beverage receptacles might be met with upon reception. A bright red one printed with London's most iconic and still up-and-running recording studio? No chance. That mug is becoming the mug. (Even if they really could've done without a 19th to squeeze into their cupboard). Perfect for that Christmas evening eggnog... and the strong coffee every morning after.

Is it even a Christmas stocking if it doesn't contain any chocolate? A more, er, 21st-century alternative to chocolate money, this choccy tablet should give them something to work on throughout the day – even without all those apps they usually have.

If an iPad lovingly recreated in chocolate sounds a bit much for one person, smaller smartphones made entirely out of the sweet stuff are also available.

Then again, it is Christmas...

Today's best milk chocolate ipad deals
View Similar Amazon US
Amazon
No price information
Check Amazon
We check over 130 million products every day for the best prices
No comments yet Comment from the forums
What Hi-Fi? Newsletter