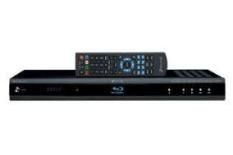 Appealing to some, but most buyers would be far better off buying a cheaper Sony

You'd be forgiven for thinking that the Dune BD Prime 3.0 looks like just another Blu-ray player.

It's the right shape, it's got a chunky Blu-ray logo in just the right place and its styling…well, anyone with an older Sony Blu-ray player will find it familar.

It's designed to join your network and replay a massive range of differing digital media – both sound and vision – from a network-attached storage device (NAS) or PC.

It can also be connected directly to an offboard hard-drive – or several hard-drives – via both USB and eSATA feeds.

And that's not all. You can also use your BD Prime 3.0 to stream HD photos, listen to internet radio stations and even function as a BitTorrent client, streaming your (legal!) downloads over your network to other suitable devices as you see fit.

Fundamentally flawed
All clever stuff. Yet the Dune falls down in two key areas: first, its performance as a plain old Blu-ray disc player, and second, in terms of its usability.

Blu-ray first: for absolute clarity and detail the BD Prime 3.0 is fair, but no more than that; Sony's BDP-S370 is far better, with a clearer grasp of edges and backgrounds, more consistent blacks and smoother motion-handling.

But that's the good news – the Dune really falls down sonically, with a poorly defined and dynamically lacklustre presentation that manages to make even large-scale action films appear withdrawn and inhibited.

Complicated to use
Oh, and it takes aeons to load, spinning each disc in clumsily audible fashion as it does so. So as a straight Blu-ray player – one that doesn't, we should add, deliver 3D playback either – the Dune's well out of its depth at this elevated price.

But surely the compensation lies in its extraordinary flexibility, correct? Erm…nope. Not really. Thing is, while the BD Prime 3.0 does deliver on its promise in many regards, it's far from slick to use.

To anyone with a working knowledge of PCs, networks and media distribution, it won't be too intimidating: to a mainstream buyer, the broader appeal of Sony's BDP-S370 (less flexible, certainly, but much cheaper and far easier to live with) makes much more sense.