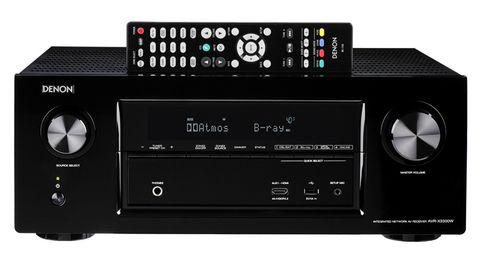 In the same way a vampire has a taste for blood, we’ve got a taste for Denon’s new range of AV receivers.

Our appetite was whetted by the brilliant AVR-X2300W (£500) but now we’re moving up the food chain with the meatier, more expensive Denon AVR-X3300W.

At first glance, there doesn’t appear to be much separating them, so we’re interested to see whether the AVR-X3300W can justify the £300 price premium - or if you’d be batty to pay it.

You could play the world’s shortest game of spot the difference placing the Denon AVR-X3300W and its sibling against each other, but we’ll save you the effort. The chassis looks almost identical, save for an extra five centimetres of depth on the AVR-X3300W.

An inspection of the front panels shows they’re the same, with dials, buttons and connections (which include a HDMI input and headphone socket) all matching up. The only difference is the model number, bolded up in the bottom right hand corner.

Round the back, the AVR-X3300W features the simple, fuss-free layout that has been a central theme of Denon’s recent AV amps.

There’s no shortage of connections, with eight HDMI inputs for all your hi-def and Ultra HD sources. They’re all capable of 4K 60Hz pass-through and are HDCP 2.2 certified.

The Denon can even upscale content to 4K resolution if desired, but we would suggest allowing your 4K TV or projector to carry out these duties.

Elsewhere there’s a decent smattering of digital connections and some legacy analogue video options for hooking up older kit.

On the face of it, at least, it’s hard to see where any of that extra £300 has gone - even the remote control has been copied and pasted from the budget model.

A few more differences begin to appear when you start ticking off the features.

The AVR-X3300W gets Audyssey’s advanced MultEQ XT32 speaker calibration software - it offers a thorough set-up process which takes around 10-15 minutes to complete.

Once all the speaker levels and distances have been taken (and checked manually), we’d recommend experimenting with the Audyssey processing modes turned on and off.

Unless you’re listening in the wee small hours and your walls are wafer thin, we would turn Dynamic Volume off - even its lightest setting tends to mute the Denon’s far-reaching dynamics.

Our concerns over the lack of coaxial digital inputs on the AVR-X2300W have been addressed and you’ll find a couple of inputs fitted to big brother.

There’s also more of a custom install slant to the AVR-X3300W with an RS232 port, 12v trigger out, Crestron Connect support and Zone 2 audio and video all present.

The Denon’s ability to decode all mainstream home cinema sound formats, including Dolby Atmos, is par for the course for home cinema amps at this money.

This includes Dolby Atmos in 5.1.2 form. At the time of writing, compatibility with DTS:X is a software update away.

Users looking for simple music streaming have a number of options at their disposal, including Spotify Connect, AirPlay and Bluetooth. Internet radio and streaming from a NAS device on your home network are also supported.

Wireless connectivity is aided by the amp’s ability to work on both 5GHz and 2.4GHz wavebands, although a wired ethernet connection would always be our first choice where available.

But streaming isn’t limited to lo-res files beamed from a smartphone or tablet. The Denon AVR-X3300W can handle all manner of file formats across a network including 24-bit/192kHz PCM and DSD in both single and double-speed form.

Set-up is a simple affair. Denon has gone to a lot of trouble in recent years to simplify its AV amps without compromising features, and it deserves to be applauded. This experience is quite the opposite of the intimidating, complex affair that setting up some multichannel amplifiers can be.

The amp’s Setup Assistant takes you by the hand and guides you through every stage of the process. From stripping your speaker cable (complete with small animation) to setting up your speakers for Atmos, the Denon has your back.

The only thing that takes up an ounce of your brainpower is assembling the flat-packed, cardboard microphone stand - and even then its use isn’t compulsory.

We weren’t too sure about Denon’s 2016 AVR Remote for Android and iOS when we reviewed the AVR-X2300W, but the iOS app at least proves much more stable this time round.

Using the app on an iPhone 6S Plus, it is reasonably responsive, allowing you to control everything from source selection and sound processing modes to speaker set-up.

It shares similar character traits, for sure. Punch and poise are still high on the agenda, but you immediately get a sense that there’s more waiting in the wings. This particular Denon has a couple of extra gears.

Sure, it’s able to blow your socks off with the help of a punishing, bruising soundtrack, but really this is the very least we’d expect when moving up from a budget to mid-range AV receiver.

Some amps have no trouble sounding ballsy and gung ho, but it’s often done at the expense of subtlety. The AVR-X3300W has loads of power at its disposal but still manages to sound sophisticated with it.

Avengers: Age of Ultron isn’t just a superhero showcase, it’s a fine test disc. We play it through Panasonic’s DMP-UB900 4K Blu-ray player, and the Denon laps up the action during the opening battle.

As Thor despatches a squad of bad guys and Hulk smashes his way through an enemy bunker, low frequencies are delivered with force and solidity.

As Hulk and Iron Man’s Hulkbuster battle it out later in the film, their bout of fisticuffs results in the levelling of an entire construction sight. And the depths to which the Denon’s bass delivery manages to plummet are mightily impressive.

As the building collapses in on itself, the power and scale of the destruction are quite overwhelming.

Listen to the same combination of scenes on its more affordable sibling, and you can immediately hear the difference.

When Ultron comes online and interacts with Jarvis, Tony Stark’s AI assistant, the AVR-X3300W changes tack and drops down a couple of gears. Its remarkable sense of finesse takes over, painting the scene with broad brush strokes of subtlety.

The Denon creates an eerie sense of quiet. Dialogue between the two is crystal clear and there’s plenty of detail and expression to their voices. As the conversation begins to take a turn for the worse, it really helps to draw the viewer right into the heart of the on-screen action.

As Ultron starts to sift through streams and streams of data, sound effects flit between side channels and surge from the back of the surround field to the front with impressive precision.

The Denon steers surround effects efficiently and precisely, but you still get the sensation of being in the middle of a surround-sound bubble.

Thanks to the receiver’s dynamic cut and thrust, its ability to punch its way through a movie soundtrack stands it in good stead for music playback too.

Across all inputs, the Denon’s brilliant sonic balance is still the major draw, and even wirelessly over Bluetooth or Spotify Connect, you’re treated to an entertaining sound.

Galantis’ Runaway is a catchy uplifting dance tune, and the Denon communicates the fun and frivolity of the track without restraint.

The emotive vocal starts proceedings, the Denon giving it prime position in the sound field. As the track builds and starts its dynamic shift, all the subtle details make way for an uplifting crescendo of electronica.

When we started this review, we already knew Denon had a great £500 receiver on its hands. We weren’t quite sure if the AVR-X3300W would be able to justify its position and price premium over the AVR-X2300W.

But we were wrong to be concerned.

The way it manages to mould all its various strengths together but also maintain such expert balance and finesse should be applauded.

If you want to take your budget home cinema set-up to the next level, then be in no doubt that Denon AVR-X3300W will do just that.