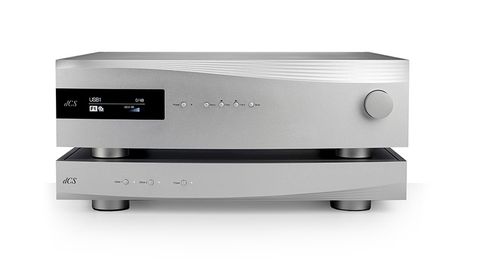 If your high-end system needs a new digital heart, buy the Rossini DAC and Master Clock. You won’t be disappointed

Cambridge-based dCS started off in the late 1980s as an electronic engineering specialist, developing digital products for telecommunications companies and military agencies.

When digital music began to properly take off, the company soon branched out into audio. At first it was digital converters for pro use, but it didn’t take long for people to start using them at home too.

The company’s products have always been pitched at the high-end of the market and they've been quick to evolve, pioneering 24bit high-resolution conversion and implementing DSD early on. There’s an enviable amount of digital audio heritage here, and that experience shines through in the Rossini DAC (£17,090) and Master Clock (£5,520).

But to call the Rossini a DAC is to understate its capabilities somewhat. The company labels it an Upsampling Network DAC, which is far closer to the mark. This unit is more of a digital hub for a system rather than just a mere digital-to-analogue converter.

While such conversion plays a core role in what the Rossini does, the product also packs a UPnP music streamer, supports Tidal, Spotify Connect, Deezer and Apple Airplay, and works as a digital preamp. Just add a power amp or active speakers to get sound.

File support for streaming is excellent. All the major digital formats are covered, including WAV, FLAC, AIFF (all three up to 24bit/384 kHz resolution) and DSD (single and double speed). MQA is now on the menu, making the Rossini about as accommodating as we would hope for.

Look inside and it’s clear the company has an obsessive eye for detail. The highlight is dCS’s proprietary conversion circuit called the Ring DAC, and all the processing that goes around it.

This circuitry and the software that goes with it is the heart of the Rossini and a major part of why it performs so well.

Overall build quality is superb. The casework is immaculately constructed, feels immensely solid and is finished to flawless levels. The Rossini DAC controls work with precision, and the unit - along with the partnering Master Clock - gives off an understated luxury aura that befits the sky-high price.

The unit is operated via a dedicated app (free, iOS only), which generally works slickly, and a regular remote is available as an optional extra (£390). When the Rossinis are so expensive to begin with, not including it in the price seems petty.

There’s no shortage of connectivity here. The DAC has all the usual inputs – USB, coax and optical – alongside less common items such as multiple AES/EBUs.

The asynchronous USB will cope with the full range of file formats up to 24bit/384kHz and double speed DSD, while coax tops out at 24bit/192kHz and optical is limited to the usual 24bit/96kHz.

Use a single AES/EBU and it adds single speed DSD to the coax’s capability, but connect both of them and double speed DSD is on the menu. Connect one of dCS’s disc players to those twin inputs and SACD playback is possible through an encrypted transmission of data between the twin units.

We’re impressed with the way dCS has implemented Apple Airplay too. The Rossini is quick to connect to our iPhone, and the sound is stable and good enough to stop us complaining about the lack of Bluetooth. This kind of feature really does add considerably to the experience of using the Rossini DAC.

You may be wondering what the point of the Rossini Master Clock is ­– we certainly did. It’s an expensive proposition on top of an already pricey DAC, so the Rossini must have a cutting-edge clock already included, right?

Even then, how much difference can it make? These questions run through our mind when we connect the two products together through two BNC-terminated cables – one for the 44.1kHz family of sampling rates and for 48kHz and its multiples.

It takes no more than a minute for us to be convinced.

The Rossini DAC may be a superb performer in its own right, but add the Master Clock and performance goes up a level or two. Given a suitably transparent system, there really is no doubting the increase in precision, solidity or transparency.

Let’s face it, anyone seriously considering spending this kind of money will already have a top-end set-up. We used our usual reference system – Naim’s NDS/555 PS provides both analogue and digital feeds, while Gamut’s D3i/D200i pre/power provides the muscle.

We have a choice of speakers – our usual ATC SCM 50s and the Spendor Classic 200s . dCS also supplied a Paganini disc transport to test out the SACD capability - it’s such a capable unit we end up using it more often than expected.

We start with our Gamut preamp in the signal path, but it doesn’t take long for us to plug the Rossini DAC directly into our Gamut power amplifier using balanced XLR outputs. The system sounds clearer and more informative this way.

It pays to work through the DAC’s menus. There are multiple filter settings for both PCM music streams and another set for DSD. The differences between these come down to personal taste, music choice and system matching rather than one particular option sounding obviously superior in all situations.

Once optimised and given a few days to settle, the Rossini pairing turn in an astonishingly good performance - as they should for the money. This is true whether we’re using the streamer, the in-built music services or the digital inputs.

We listen to Bizet’s Carman Suite No.1 via our Naim NAS, and our first impressions are of a huge, highly stable soundstage packed with precisely located instruments. These don’t waver in position regardless of changes in dynamics or musical complexity.

There’s just so much resolution here. We hear textures in instruments and dynamic nuances that most rivals simply don’t notice. The Rossini combination just lays it all bare. Everything is easy to follow and kept under control, and without the system ever sounding overly controlled.

There are some extreme dynamic swings in this recording and the dCS pairing take it all in stride, always sounding composed yet delivering all the energy and punch packed in the music.

The Rossini’s presentation is so clean and crisp, with leading edges that are sharply defined and harmonic decays that happen in a natural way.

In the past, the company’s products have been accused of sounding a little clinical, putting analysis over the music, but the Rossini DAC/Master Clock pairing never sounds that way.

In a well-balanced set-up they simply fade into the background, letting the music take centre stage. Their tonal neutrality helps – rarely have we come across a product that sounds so pure and natural across the frequency range.

We switch to Leonard Cohen’s You Want It Darker and enjoy the way the pair renders his deep, gruff voice. There’s plenty of authority and power, but also a full dose of subtlety when needed.

We love the commanding way this combination handles low frequencies, managing to partner tunefulness with power and depth better than anything we’ve heard.

While the dCS’s rhythmic ability is more surefooted than enthusiastic, the pairing can still convey the relentless momentum of the title track as well as the jauntier feel of songs such as Traveling Light.

We listen to a wide range of music, from Nirvana’s hard-charging Nevermind and PJ Harvey’s gothic-tinged White Chalk all the way through Debussy’s Clair De Lune.

Through it all this dCS pairing manages to delight, excite and entertain. It has the insight to keep detail obsessives happy but also a deeply musical nature that lets the rest of us just sit back and enjoy the music.

While the Rossini’s price puts it well beyond the means of most, we haven’t heard a cheaper alternative that betters its performance, or one that betters the extensive feature count. If you have the budget, you can buy this with confidence.

See all our dCS reviews