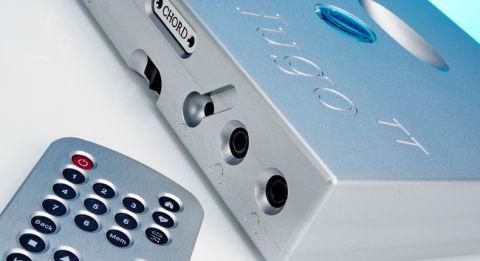 The Hugo TT is yet another terrific DAC from Chord. It sounds fabulous, is well-specified and beautifully made

Chord’s Hugo can rightly be considered a landmark product for the brand. It has sold around 10,000 units so far, and after just 18 months of being on sale, it is already by far the most popular product in the manufacturer’s 26-year history.

Such success has understandably led the brand to introduce other similar products. Chord has identified a market niche for high-end personal use and is quite happy to exploit it.

The first of this new wave of products to be released is the Hugo TT, where TT stands for table top. The name gives a not so subtle clue as to this DAC’s role.

The original Hugo was intended as a portable device to be used on the move, and with phones, tablets and laptops, predominantly. It had traditional home hi-fi digital inputs and even a pair of line level outs, but these were viewed as extras, included simply because the company could afford to be indulgent.

But once it hit the market Chord was taken aback by the number of people using it as a permanent part of their main hi-fi. That’s where the TT comes in.

The TT is a larger Hugo with a display and full range of hi-fi connectivity. The original may have had hi-fi connections, but the lack of clearance between the sockets and casework meant chunkier cables wouldn’t fit.

If you did manage to connect them, there was always the chance that the sheer weight of the leads would pull the Hugo from its place on the rack. However, those who put up with all this hassle found that the unit turned in a spectacular performance as a dedicated DAC and preamp.

The TT has much to live up to, but it makes a good start. Chord has always walked a different path from most of its rivals when it comes to circuit design. Rather than use off-the-shelf DAC ICs from the likes of Burr Brown or Wolfson – as most of the industry does – Chord uses a powerful FPGA (Field Programmable Gate Array) loaded with custom software.

This approach gives a lot of freedom in the way the signal is processed and so, in theory at least, an improved chance of getting a better performance than the competition.

Take a look inside the TT and you’ll find the main audio circuitry is the same as the standard Hugo. The difference is in the power supply. The TT has double the battery capacity and makes use of supercapacitors to extend battery life and improve performance.

Though the TT can work without mains help, it’s not intended to be used as a portable device – the battery pack/supercapacitor arrangement is there to provide a clean power feed to the audio circuitry and isolate it from any mains variation or noise.

This Chord’s connectivity is terrific. It has two USB-B inputs; a full flavoured HD option that supports 32-bit/384kHz PCM data streams as well as DSD in both single and double speed forms, and one marked SD, which is limited to 16-bit/48Khz signals.

The latter is intended for phones and tablets and should work with most devices without needing dedicated driver software.

Alongside the USBs there’s the usual combination of coax and optical. These will accept signals of 24-bit/384kHz and 24-bit/192kHz respectively. Chord has long been one of the more forward looking high-end manufacturers, so the inclusion of an aptX Bluetooth isn’t a total surprise. It’s easy to connect to and works well.

There are three headphone outputs – two 6.3mm and a single 3.5mm. We used a range of headphones during the test, including Grado’s PS500, Sennheiser Momentums and the BeyerDynamic T1, but there’s plenty of volume and a good amount of drive with each.

There’s no problem with connecting the TT to your main hi-fi either. It has both single-ended and balanced XLR analogue outputs and a volume control means that this DAC can even perform preamp duties in an all-digital set-up.

The only thing to note when using XLRs is that the pronounced casework lip above the sockets makes disconnecting the plug harder than it should be.

Build quality is terrific with the Hugo feeling solid and beautifully made. There are two finishes available – the silver of our review sample and black. We think it looks smart in both options.

The TT is a relatively compact box, measuring just 45 x 235 x 22 (HWD) mm, so it should fit easily into most environments. Chord has never been shy when it comes to aesthetics and this product is no different. There are scoops and portholes (to see the internals), a volume wheel that lights different colours to indicate level and a proper, but small, display. The overall effect is stunning.

The supplied remote is disappointing though. On first impression it looks classy enough, but it doesn’t take long to realise that it’s just a conventional handset of the type seen on budget Bluetooth speakers, which Chord has encased in aluminium.

The thickness of this metal cover makes it difficult to press the buttons, its generic nature means half the buttons don’t do anything, and those that do aren’t labelled properly, meaning the experience is one of frustration.

It comes as no surprise to find that the TT sounds better than the original, as it should at double the price. The differences aren’t massive – how could they be when the original is already so good – but they still add up to make the TT one of the very best stand-alone DACs we’ve heard.

There’s just so much resolution on offer. Play something like Hans Zimmer’s Gotham’s Reckoning from The Dark Knight Rises OST in 24-bit/192kHz and the Chord is right at home. It delivers the multitude of instrumental strands with class-leading clarity, defining the edges of notes with unerring precision.

It’s not an overly etched sound either, and there’s a convincing natural flow to instruments. Stereo imaging is great – it’s expansive, focused and nicely layered, remaining stable when the piece becomes busy.

There’s composure here too, and a sense of control that keeps everything in check without suppressing the music’s verve.

The Chord’s tonal balance is pretty neutral and we have little to complain about when it comes to refinement, even when playing poor or aggressive recordings. It’s a revealing product but not one that that unduly emphasises flaws.

We’re also impressed by the dynamics on offer. The large-scale varieties are thumped out with real authority and pleasing reach, but it’s the way this Hugo handles nuances that impresses most; there’s a degree of delicacy in the quieter sections that is simply breathtaking.

This quality is rammed home when listening to a CD rip of First Aid Kit’s Stay Gold. The duo’s vocals are delivered with finesse and there’s no shortage of agility or articulation here. The Chord just gets on with the task of communicating the artist’s message, and does it brilliantly.

Switching to Stevie Wonder’s brilliant Higher Ground on DSD shows off the TT’s excellent timing skills and its ability to communicate the momentum of a hard-charging rhythm track. There’s plenty of drive at low frequencies and the bass is delivered with grip, power and agility.

There’s realistic authority at low frequencies too, and solidity to the overall presentation that not even the talented original can match. It can’t muster quite the same crispness of detail or level of overall clarity, but given the price difference, that’s understandable.

Switching to Bluetooth using Sony’s Xperia Z3 Compact as source continues the good news. Listening to Kanye West’s All Of The Lights shows the expected drop in performance levels. There isn’t quite the clarity or insight offered by the other inputs, but it’s still good enough to have us enjoying the song.

While the result may not be high-end hi-fi, the inclusion of the Bluetooth input is a good choice. It gives people more opportunity to use this product, and that can’t be a bad thing.

We used the TT as a preamp in our reference set-up and it works superbly. It replaces our reference Bryson BP26 preamp and connects straight into the matching 4B SST2 power amplifier via balanced Chord Signature cables. The rest of the system is Naim’s NDS/555PS streamer as digital source and ATC’s SCM50 speakers.

The gains when switching to the Chord as preamp are extra clarity and definition, with more insight and finesse, though the sound has greater weight and solidity with the Bryston analogue preamp in circuit.

We also give Chord’s Crossfeed system a go. It works with headphones to give the sonic presentation a more spacious soundstage, moving it away from the conventional in-the-head approach.

The system works well, delivering something closer to the presentation given by loudspeakers without losing out in the way of focus or precision.

The Hugo TT version sets new standards at its price. It builds on the considerable strengths of the original model adding extra clarity, stronger dynamics and improved authority in the process.

Read all our Chord news and reviews