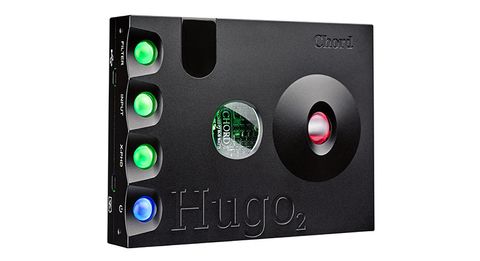 £1800 is a not inconsiderable sum for a DAC, but Hugo 2 proves well worth it

Our infatuation with Chord’s remarkable Hugo DAC - which manifests itself in its five-star multiple-Award winning statu - is as strong as ever.

We overlook its little foibles - its wilfully quirky design, the tougher-to-access-than-necessary input and output sockets - like an indulgent parent forgives an infant’s table-manners. We love its thrillingly detailed, effortlessly dynamic and neatly organised sound as much now as we did the first time we heard it.

So for us, at least, Chord had no need to go fiddling.

But Chord is a restless company, and Hugo is no more. Instead, please welcome to the stage Hugo 2. A little smaller, a little sharper around the edges, and significantly more expensive than the original. And, unlikely though it seems, slightly quirkier than before.

The casework is gratifyingly smooth and crisp-edged, the quality of construction is unarguable, and the laser-cut brand and model logos are particularly pleasing. There’s no confusing Hugo 2 for a product from any other brand.

At 2 x 10 x 13cm (h/w/d), Hugo 2 is a touch more compact than its predecessor in every direction. It’s still a big box, though, and for us it’s a struggle to get behind Chord’s suggestion Hugo 2 displays “obvious portability”.

Sure, it’s portable inasmuch as you can pick it up (it’s only 450g, thanks in large part to its high-end aluminium construction), but don’t imagine it’ll sit comfortably in a pocket for on-the-go use.

Chord has tacitly acknowledged as much by including a remote control with this latest Hugo. It’s a functional handset, bog-standard where Hugo 2 itself is wildly individual, but its presence suggests Chord knows full well Hugo 2 is as likely to end up as a DAC/pre-amp in a static system as it is to get out and about.

Despite its reduced dimensions, Hugo 2 includes more of the colour-shifting spherical control buttons Chord orginiated in its Mojo DAC.

There are four edge-mounted buttons: the power sphere can be one of five different colours to indicate charging status, the filter sphere has four colours, the input selector has six (including ‘coaxial dual data mode’, which is not user-selectable) and the crossfeed control four.

The top-mounted rolling volume control runs a multi-coloured spectrum depending on the output level, and finally one of no less than 11 colours is displayed through the little window into Hugo 2’s interior to indicate sample frequency of an incoming digital signal.

All of this colour-based communication makes Hugo 2 a memorable looker, and it makes a change from more common letters and/or numbers. But it makes for an instruction manual that doesn’t so much need reading as decoding. Surely no one is going to memorise sample rates, from 44.1kHz to DSD (-512 as a maximum) as a series of 11 colours. Especially as three are a variation on purple.

Hugo 2 features all the inputs and outputs you could realistically require. Its digital optical input (a full-size TOSLink) is good for digital audio up to 24bit/192kHz, while the digital coaxial (a 3.5mm socket) functions up to 2bit/384kHz.

The final physical input is a mini-USB able to deal with information up to 32bit/768kHz and DSD512. Music can also be fed to Hugo 2 via aptX Bluetooth.

There are 3.5mm and 6.3mm headphone socket outputs, and a pair of stereo RCAs for connection to an amplifier.

Despite being better spaced and more accessible than on the original Hugo, we still can’t fit our reference Chord Company (no relation) Signature Tuned Array RCA cables to the slightly recessed RCA output at the end of Hugo 2 and have to settle for something a touch more prosaic.

Filter-switching is available, allowing the user a degree of control over Hugo 2’s sound.

The crossfeed control (marked as X-PHD on the casework) is retained from the original Hugo and here, as there, is designed to duplicate the effect of listening to speakers. Some hefty binaural research has gone into this, so it’s worth investigating the settings: off (unlit), min (red), med (green) or max (blue).

Chord's great differentiater, its bespoke Field Programmable Gate Array, is back in supercharged form in Hugo 2.

Battery life has improved a little – around seven hours is achievable from Hugo 2.

Put simply, it is difficult in the extreme to find meaningful fault with the way Hugo 2 converts and delivers your digital audio files.

And while it’s obviously preferable to feed in a file of meaningful size in order to hear Hugo 2 at its best, unlike the outgoing Hugo this DAC doesn’t have a lot of unkind observations to make if you lower yourself to Bluetoothing a 320kbps Spotify file. Hugo 2 simply makes the best of it.

Broadly speaking, there’s no change in Hugo 2’s character whether its handling a Spotify-derived stream of Big Boi’s All Night or a Qobuz Sublime+ 24bit/96kHz file of Michael Jackson’s Don’t Stop ‘Til You Get Enough.

The bigger the file and the more information Hugo 2 has to play with, the greater the detail and fidelity of its performance - naturally - but in all circumstances Hugo 2 serves up a detailed, dynamic and punchy performance.

Timing is perhaps Hugo 2’s strongest suit of all – it brings absolutely believable unity to ensemble music. That Michael Jackson tune features both brass and strings sections in addition to the more standard bass/guitar/keyboard/drums rock’n’roll line-up, but there’s never any suggestion the musicians aren’t interacting in the most natural way.

There’s crispness and clarity to Hugo 2’s sound, admirable management of tempos and an unequivocal layout to the soundstage.

Pare down the sound to the piano-and-voice of Joni Mitchell’s River (24bit/192kHz) and the Hugo 2 demonstrates its mastery of timbre, as well as its supernatural way with the attack and decay of individual notes.

Each hit of each piano key is packed with information, and the sound of the instrument (as well as the details of the environment in which it’s being played) is laid bare.

There’s nothing overly analytical about the way Hugo 2 passes on this information, but you’re left in no doubt that every available detail, no matter how minor, has been incorporated and laid bare for your ears.

The same is true of voices. The purity and vulnerability of Mitchell’s voice (as well as the harmonies she sings with herself) is transmitted absolutely explicitly, freighting her aching regret with real and tangible emotion.

From one extreme of the frequency range to the other, the Chord is a smoothly neutral listen – it doesn’t overstate, it doesn’t underplay. It simply arranges the pieces into a convincing whole where bass is balanced against treble in the most unforced and crystal-clear manner.

With Hugo 2 incorporated into our Naim/Gamut/ATC reference system as both DAC and pre-amplifier, the story is the same.

Ours is a system that’s intended to make a product’s shortcomings obvious, but in the case of the Chord it simply gets on with the job in the same clear, frank and casually spectacular manner it does when driving a pair of headphones.

It seems as-near-as-makes-no-difference impossible to wrong-foot Hugo 2. It has the determination to dig deep and hit hard, enough to make A Tribe Called Quest’s We The People… (24bit/88.2kHz) drive forward unstoppably.

It has the deft lightness of touch to make The Costello Show’s Sleep Of The Just (24bit/192kHz) glide over its own defeatedness.

And it makes Nina Simone’s typically characterful reading of Don’t Let Me Be Misunderstood (24bit/96kHz) sound like a malevolent music-box.

MORE: Read all our DAC reviews

There isn’t another DAC around at anywhere near this sort of price able to communicate so torrentially, so unambiguously or so effortlessly. We like it a lot.

MORE: Read all our Chord reviews