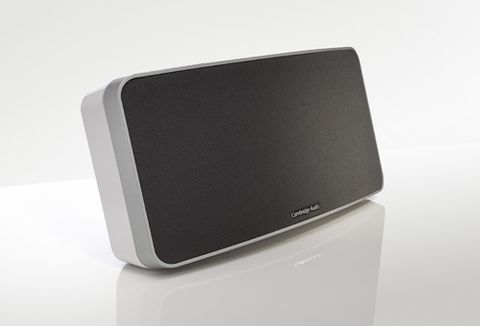 It might not be the star all-rounder it was, but the Minx is still a worthy option

The release of the Cambridge Audio Minx Air 100 all-in-one wireless speaker sees the stalwart of affordable British hi-fi separates moving away from its comfort zone somewhat, and into a more mainstream, and as yet untrodden, area.

The Minx Air 100 packs both AirPlay and Bluetooth connectivity, and with internet radio to boot, this is one seriously connected speaker that isn’t about to show favouritism to one type of device, whether iOS or Android.

It’s a speaker that can offer the best of both wireless worlds – although that's not such a novelty now as it was when we first tested it. Rivals such as the Panasonic SC-NE3, which has AirPlay, Bluetoth and DLNA, offer even more.

The build quality of the Minx Air 100 is impressive. It’s a sturdy and fairly weighty single-body construction, specifically designed with damped material to reduce vibration. Its size is one that would probably lend itself best to slightly smaller rooms, a bedroom or kitchen say: bigger rooms may well be better left for its forthcoming larger sibling, the Cambridge Audio Minx Air 200.

The design leaves us feeling a little cold, though. There’s nothing wrong with it, per se, but just nothing particularly great about it either. We do wish the control buttons weren't lumpy grey, and that the tiny, slim remote control wasn't so fiddly and plasticky.

When you look at the Minx alongside the likes of the elegant B&W A5, the colourful Libratine Zipp or the bold JBL OnBeat Rumble it just feels a bit bland, and its grey and white colour scheme won’t be to everyone’s taste either.

Still, looks are not everything, and at this price point, it’s the Minx Air 100’s pure connectivity that will be this its main selling point for most.

At the back of the unit you’ll find a range of inputs that hint at the speaker maker’s hi-fi background.

Alongside an ethernet port for wired networks and a 3.5mm input for hardwiring an MP3 player, there are also RCA analogue inputs for hooking up a device such as your TV or Blu-ray player. This is unusual on all-in-one speakers and a nice addition to push the Minx Air 100’s possibilities even further.

Cambridge Audio specifically went for an online wireless set up for the Air 100 so owners of different devices had the same set-up process.

It’s a bit of a faff when compared with the simple app set-up of B&W AirPlay speakers, but the instructions in the box are easy to follow and it didn't take long once we got the hang of it.

As long as the Air 100’s LED on the back panel is flashing green and orange, it’s ready to connect and will broadcast its own wireless network, which you will need to connect to.

Enter the IP address given in the instructions and the setup page will appear for you to choose your home wi-fi network and enter your password.

Once that’s done, you’ll be able to access internet radio and play music over AirPlay from any Apple device connected to the same network.

Bluetooth users will need to press the pairing button on the top of the device and connect the traditional way – both ways proving to be hitch-free.

Under the hood of the Minx Air 100, Cambridge Audio has installed two of its 10cm patented BMR drivers, which aim to give a bigger, more room-filling sound over traditional drivers.

And it seems to work: it’s a big sound from a small speaker, though it still can’t quite shake off the limitations of its size. You can never forget where the sound is coming from, but then this is generally the situation with this type of speaker.

The Minx Air 100 sounds exactly how we remember it from our initial First Test. It’s a big, detailed and weighty performance. The powerful sound coming out of the relatively compact speaker is enjoyable, with strong, solid and rhythmically precise notes.

But with that authority comes a slight sense of dynamic restraint, particularly with voices, which stops the Minx delivering a truly effortless performance. Rivals such as the JBL OnBeat Rumble and Libratone Zipp do a better line in expansiveness, too.

We’ve previously questioned the Minx’s slightly muffled midrange approach, and while we forgave it last time, it’s hard to ignore it in light of newer rivals. Play Aerosmith’s Crazy and this dock struggles to convey the true reach of Steven Tyler’s highest notes, while there’s a lack of emotional connection when listening to Amanda Palmer’s heartfelt lyrics in Ampersand.

Like the B&W Z2 and Sony SRS-BTX500, the Minx’s sound is quite localised compared to the more open, room-filling performance of the JBL. The Libratone is also more effective in spreading sound, and serves up a subtler, more expressive sound too.

And of course, the Minx Air 100’s biggest threat comes from the bigger Minx Air 200 which delivers a much more powerful, nuanced and thrilling sound. We’d happily pay the extra £100.

You can at least decide how much punch you want with the bass dial on the back of the unit. We would certainly recommend playing around with it to find a level of bass that suits your tastes.

We found turning it just past midway was around the right level for us – too low and it took the life out of a track, but whacking it up to full made the bass flabby and over emphasised for our tastes.

Sound quality was fairly consistent over Bluetooth and AirPlay, though we tended to prefer the Bluetooth balance to things – bass was more controlled and the top end sound was fuller and more convincing.

AirPlay was slightly thinner at the top, but nothing that took away from a thoroughly toe-tapping experience.

The addition of internet radio is a nice touch, and comes with ten of the most popular stations pre-programmed out of the box.

The Minx Air app will also allow you to change these stations to your own favourites if you’re not a fan of the selection at hand, complete with radio artwork. You are even able to filter your search for new stations by the bitrate quality they broadcast at.

A touch of dynamic subtlety here and a little more clarity there, and the Minx Air 100 could have remained on the five-star podium with its rivals.

That comprehensive list of streaming features is still its biggest attraction, but with rivals now offering similar versatility the Minx Air 100 no longer holds that spotlight.