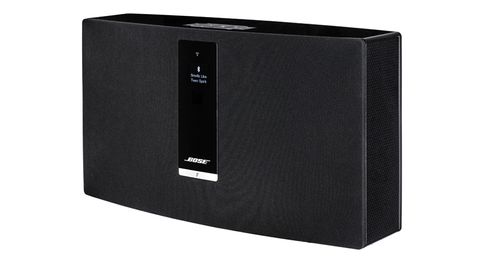 Two years is a long time in this market, and our re-testing of the SoundTouch 30 series III shows it’s now time for a fourth iteration

We’re not in the habit of re-testing products each time a new rival appears on the market, especially those not deemed to be class-leaders first time round.

However, our recent multi-room system test – which saw Bose’s Wireless Link enter our testing rooms for the first time – gave us cause to run the rule over its SoundTouch speakers once again.

While the diminutive SoundTouch 10 stood up well against this current crop of competitors, our testing of its chunkier sibling led us to having little alternative but to review its original star rating.

This third generation of the SoundTouch 30, which we first reviewed in early 2016, is at least the best stocked of its lineage.

The second-gen 30 stuck to the original’s guns on the hardware side, focusing instead on improving app software and adding more streaming services.

The third-gen presses forward even more, so it’s out with Airplay and in with Bluetooth, which should please Android users. When we reviewed the first-gen SoundTouch 20 in 2014, we balked at the lack of WAV and FLAC support.

The second-gen SoundTouch 30 didn’t address this, but in this third generation, WAVs and FLACs are supported, leaving hi-res support to top the wish list for any potential fourth-generation model.

Bose says that with 802.11n dual-band wi-fi, the connection is stronger and more reliable, with the addition of 5GHz compatibility catering for more stable streaming.

Subtle refashioning doesn’t go unnoticed, either. The Bose is still essentially a rather bland yet sturdy box, which dwarfs the Sonos Play:5 and Bluesound Pulse 2 - it gets extra beauty pageant points for its glossy, patterned panels.

Around the back there’s a 3.5mm input, and an ethernet por, for connecting to your network (and wi-fi too) so you can stream music from a laptop, PC or NAS drive.

Inside, Bose uses its ‘Waveguide’ technology, which effectively performs a kind of traffic-warden role in delivering the power of the SoundTouch 30’s two high/midrange drivers and singular subwoofer in a way that belies even its already considerable size.

The scale and power of its presentation is impressive. There is considerable yet considered bass weight, which carries some insight rather than the warbling hum that can often be mistaken for low-end authority.

Each of these SoundTouch speakers time well, too. While not perhaps with the meticulousness of Audio Pro’s C-series – the sonic aptitude of which makes it feel an unfair comparison for some rivals – their confident handling of a beat and grasping of rhythms are closer than many.

Dynamic expression is another relative strength, with the power to spotlight large-scale shifts and, while not exceptionally emotive, the subtlety to contour expression well enough so as not to become boring.

But the SoundTouch 30 loses ground in its inability to improve on the aspects of the Bose sound present in its smallest family member.

Detail levels are more than adequate for a product the size of the SoundTouch 10, however, while the strands are set in greater space thanks to the larger speaker’s increased scale, there isn’t much more insight to be gained.

The slight coarseness to treble frequencies and hardness at louder volumes that prevented the SoundTouch 10 from receiving the full five stars two years ago is amplified in the SoundTouch 30. It contributes to the latter sounding tonally detached, a discord between frequency ranges that rankles after time.

It isn’t, of course, that the SoundTouch 30’s performance has deteriorated since first we heard it, rather that the greater competition at its price point sheds a more unforgiving light on those shortcomings.

Denon’s HEOS 7 HS2 speaker for example, might not match the Bose’s gift for timing, but it’s a more coherent and less fatiguing listen – though neither is able to match the performance of Audio Pro’s C10, nor its £300 price tag.

It is also further restricted by the company’s control app. All the basics are in place: pairing is simple, grouping components or conversely setting them apart is simple and well synchronised, and it runs smoothly.

However, there are two issues here. Functions such as queuing songs and creating playlists – key to the usability of systems such as Sonos – are missing, as are some of the major streaming services.

The ability to easily connect a NAS device is a bonus, but one tempered by the omission even of Tidal – surely the most popular lossless streaming service.

Of course, that won’t matter to Spotify users, for example, and it’s easily remedied, however it just sees the Bose app toe just the wrong side of the line between uncomplicated and undercooked.

Two years ago, we gave the SoundTouch series III 30 four stars, but the subsequent introduction of similarly sized speakers with similar features since – most notably from Audio Pro and Denon – has shed a different, and less favourable, light on its abilities.

Add to that the limitations of its control app, and a drop to three stars was sadly inevitable. We reckon it’s about time for a fourth generation.