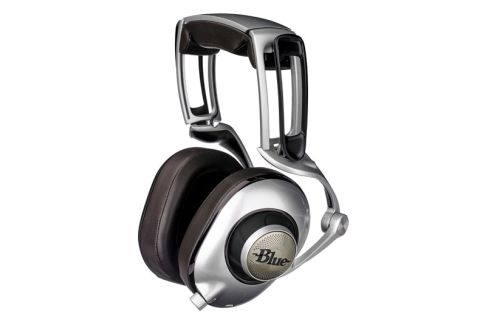 Some strong qualities, but not the all-round talent to worry the class leaders

Blue is known primarily for its microphones, which can be found in the hands of podcasters and home recording enthusiasts across the world. They look cool, and have somehow managed to avoid the ‘pro only’ intimidation that can put novices off.

The Ella headphones show the scope of Blue’s ambition as it continues to diversify. These are planar magnetic headphones with an integrated 250mW amp.

So they're well specified and striking lookers, but the question is whether they sound worthy of their asking price.

It’s easy to imagine Blue products in the well-lit, stylish offices of a start-up mostly staffed by millennials. They don’t have the baggage of a 100-year-old veteran brand. They're obviously different from the norm.

Blue makes studio gear, and these headphones have a studio-grade price. But the Ellas have the ultra-deliberate styling of a street headphone, and their use of an integrated amp suggests they’re also designed for use with a phone.

It’s as if Blue finds distinctions between types of headphone as outdated and twee as the Sharks and Jets throwing cabbages at each other in West Side Story.

Ella isn’t a unification of every kind of headphone, though. They're a wilfully weird pair. The headband is a strangely mechanical thing, with no fewer than six joints letting the frame clamp onto your head.

The official inspiration is an F1 car, but it’s the closest a headphone has come to an Aliens Power Loader homage.

As you’d hope for the price, the frame feels strong. It’s all-metal, the hinges move smoothly with zero creaking and the sensation is of a comfy-but-enthusiastic head-hug.

The pads are deliberately tapered to completely encircle your ears, making them more-or-less fatigue-free. However, the headphones are far too heavy to wear while at the gym or running. There's a limit to how ‘hybrid’ these headphones can be.

The pads and chunky headband padding are topped with soft-but-synthetic leather and the backs of the cups are closed. There’s a rubber diaphragm decoupling the part with the ‘Blue’ logo and the rest of the cup. The aim is to give the Ellas a large ‘cabinet’ without resorting to a fully open design.

One of the neat features of the Blue Ella’s skeletal headband is you can pull the cups away from your chin if you wear them around your neck while not listening, although the metal of the headband does end up resting against your collarbone. It may feel disconcerting to some.

There are two other special features to the Ellas. The first is an integrated 250mW amp. It’s charged using a microUSB socket on the left cup, and controlled using a little dial next to the cable socket.

It’s either ‘off’, ‘on’ or ‘on+’. The latter adds a little bass boost, and the signal amplitude is predictably greater while the amp is switched on. It’s welcome, as low-power sources struggle to provide enough volume with the amp off.

You’ll get a fairly substantial 12 hours use once fully charged, which is a relief - recharging takes around three to four hours.

The other eyebrow-raising apect of this set-up is that the amp is not designed to bypass the amp or DAC of your source. There’s no digital input to the Blue Ella. There are two cables, one with a 3-button iOS remote and one without, but both end in a ‘dumb’ 3.5mm jack.

So it won’t solve any signal quality issues caused by a low-quality source, but there is a compelling reason for the amp: the Ellas' planar magnetic drivers are traditionally harder to drive than conventional dynamic drivers.

That said, pairs like the Audeze Sine and Oppo PM3 have proved planar headphones can be driven perfectly adequately by a phone.

The Blue Ellas manage to counter some of the inherent issues of planar magnetic headphones. These drivers are flatter than the dynamic kind, using a membrane less than 50 microns thick. This ‘plane’ is then controlled by magnets behind and in front, causing less physical distortion of the driver, and – in theory – less distortion to the sound than a dynamic driver.

Planar headphones tend to have great transient response and very good detail, but can often sound smaller than their dynamic counterparts. But these headphones don’t sound small, particularly considering they’re closed-backed. The perceived height of their soundstage is perhaps better than its width, but along with unusual weight and strength to the delivery (for a planar headphone), this gives the Ellas remarkable energy and forcefulness.

They’re great at making music sound alive and dynamic. And there’s a decent amount of detail in every register, too.

The Ellas do perhaps try a little too hard to bridge the gap in sound character between planar and dynamic headphones, though. Their mids are full and warm, to the extent that they can seem ‘filled-in’ rather than just full.

Central channel vocals are buoyed by this bonus warmth, limiting the sense of separation, particularly as the presentation of the mids in general is smooth and relaxed rather than up-front.

In a cheaper headphone this would be a non-issue, and could be dismissed as valuing the listener’s experience over pure fidelity, but it’s significant at almost £700. Rhythmic drive could be more determined too.

With dense arrangements, particularly those with potentially chaotic bass like Kamasi Washington’s Change Of The Guard, the Blue Ellas don’t always seem as composed and calm as they should given their price.

Their energy and sheer gusto is hard to rival, let alone beat, though.

The Blue Ellas are sci-fi headphones with a novel and modern approach to high-end portable sound. They can be used as portable headphones, or as a home/monitor pair (which suits the high price a bit better).

Using planar magnetic drivers, there are some impressively high-end aspects to the sound everyone will enjoy. However, compare them with sets in their own price category and their limitations become apparent.

See all our Blue reviews