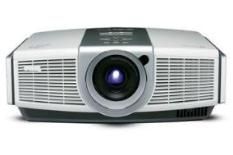 It looks fab on paper, but its performance isn’t quite so amazing in the real world

The home cinema buzzword of the moment is definitely ‘Full' – as in Full HD. And BenQ's W9000 projector, a 1920 x 1080 DLP (Digital Light Processing) design, seems perfectly suited for use with 1080p Blu-ray content, annd should also possess some image-quality advantages with ‘regular' 1080i high-def pictures. Yes, it finds itself up against highly-rated competitors, but spec-wise it looks up for the fight.

It boasts a motorised, continually-adjusting iris for maximum contrast (an 8500:1 ratio is claimed), along with an eight-segment colour wheel that should provide richer, more convincing colours and less ‘rainbow' effect with motion. And, in addition to its own extensive picture adjustments, it's designed to be fine-tuned by a qualified Imaging Science Foundation (ISF) video calibrator, which optimises results for your home.

Unusually in this price class, it's also compatible with optional lenses from Panamorph (which cost at least £1000 extra), allowing it to completely fill an ultra-wide 2.35:1 Cinemascope image with no loss in resolution.

Nearly, but not quite
The W9000 clearly embodies BenQ's determination to succeed as a top-drawer home cinema player, and it very nearly pulls it off… but not quite. While very good in many ways, this projector lacks the black depth and snap of the best in its class, and neither is it as sharp, or as adept with motion.

Even when fed with 1080p high-def from a Sony PS3, the picture just isn't as dramatic as we'd expect, either in one of the preset image modes, or after extensive fine-tuning.

Are we damning the BenQ outright? Not entirely. It's quiet, fairly well equipped, easy to install and capable of decent results. It's just that in this ever-changing, brutally competitive market, ‘decent' isn't quite good enough.