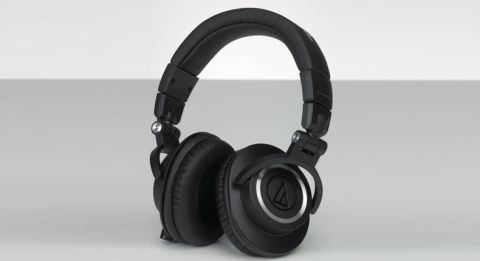 A great effort from Audio Technica: these are a good pair of portable over-ears

Occasionally, you just want something that gets the job done. That’s the case with the Audio Technica ATH-M50x: no-fuss, portable over-ear headphones with very good sound.

When we say no fuss, we mean it: beyond the most basic flourish (silver ring and a logo), there’s very little song and dance about them. We think of them more as a tool than a fashion accessory (no wonder – the M stands for ‘monitor’), which is fine by us.

There’s a lot of plastic, but it’s the good kind: it feels strong enough to withstand a lot of punishment. The cable has a twist-and-lock mechanism to prevent accidental ejection.

Earcups swivel 180 degrees, and can fold inwards too. The padding walks the line between functional and decadent. We like practical things. If only the cable had an inline remote/mic unit.

These headphones also offer an enjoyable listen. Vocals and instruments are afforded a good deal of texture, and are nicely separated on a well-organised soundstage. There’s vivacity thanks to good timing and a full-bodied delivery. It’s an immersive listen.

Tonally, the ATH-M50Xs aren’t quite balanced; they do lean a little towards the low end. It’s a warm, controlled rumble that’s just enough without overpowering. As for the rest: the midrange is well defined and well integrated with the treble, which is smooth enough to avoid harshness, even when cranked up.

It’s not quite perfect, however. We could do with more dynamic punch. And a bit more clarity would help that treble sparkle – as it feels a little muted.

If you’re looking for a portable pair of over-ears and you like your sound a little warm, for the money, the Audio Technica ATH-M50x are well worth checking out.