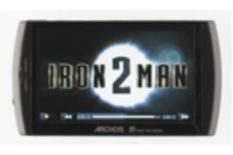 An extremely desirable media player, but The Archos 5 is still hindered by a few performance niggles

The Archos has a decently big screen, at 4.8 inches. At its heart lies an 800mHz processor plus Google's Android operating system, and its graphics look superb.

However, Android doesn't work as smoothly as we'd like: you're often left waiting for the player to switch menus or open the relevant files. Still, wi-fi internet browsing is straightforward enough.

The Archos's media-player capabilities can be further enhanced, but only at extra cost.

Nice – but they'd be even nicer if they came as part of the package.

However, despite its 800x400 screen, colours look unnatural and there's no real vibrancy to them. Blacks also appear slightly washed out.

The Archos 5 Internet Tablet is glitzy, glamorous and well-featured. However, it isn't without issues, so it misses out on five stars.