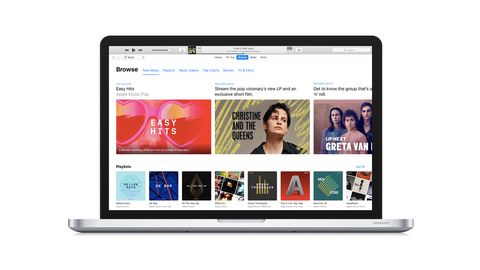 An appealing streaming service with intelligent curation, a vast catalogue and good sound quality, Apple Music will tempt you to jump ship

Apple Music arrived pretty late to the streaming service party, but it has quickly risen to the top thanks to its excellent music curation, unique 24/7 Beats 1 Radio and integration across Apple’s ecosystem.

And, of course, it's not just for iOS users; Apple Music is available on Android too, as well as other devices such as Samsung’s most recent smart TVs.

Apple Music weathered an initially mixed reaction but, thanks to some excellent iOS redesigns and updates, its paying user base had rocketed to 68 million by the end of 2019. While there's still a fair gap between that and Spotify’s 130 million paid subscribers (as of early 2020) it's not too shabby considering Apple’s service is the much younger of the two.

Apple Music mixes your personal music library with an enormous catalogue of over 60 million songs – a mix of old and new tracks on par with Spotify’s extensive catalogue – along with Beats 1 live radio, TV shows, films, music videos and expertly curated playlists.

There’s no higher quality hi-fi tier as there is with Tidal, and no free version as there is with Spotify – it's either brilliantly simple or a little restricted, depending on your point of view.

Apple Music is available on all Apple devices – it replaced the old Music app on iPhones and iPads and is integrated on Mac laptops – and is also available to download on Android devices.

Apple Music initially launched in June 2015 with a visual-heavy, cramped interface very much at odds with the clean, simple interfaces seen on rivals such as Deezer, Spotify and Tidal.

Since 2016, however, it's a different story. Apple has stripped back its app design. Expect clean typography and graphics along with a simple, uncluttered and enjoyable layout. The app is easy to navigate (although there are sub-sections everywhere), and it looks appealing thanks to the prominent album artwork. After a few minutes of figuring out where everything is, it becomes a breeze to use.

Apple has cleverly hidden plenty of options behind icons to keep the main screen as neat as possible. You’ll see three dots (or ellipses) everywhere: click them for sub-menus of various options such as adding to your library, downloading (a cloud with a downward-pointing arrow), sharing, playing later or adding to a playlist. Crucially, you’ll find the red heart/Love icon here, which you should tap if you like a particular song (or tap heart-with-a-slash if you dislike it) to help Apple curate music to your tastes.

The app is divided into five main sections: Library, For You, Browse, Radio, and Search.

The Library tab is where your entire music collection lives – every album (if you’ve turned the iCloud Music Library option on) plus your Apple Music-saved playlists and songs stored on your phone. Everything is grouped into categories: playlists, artists, albums, songs, downloaded music. Directly below these, you can scroll through your recently added tunes, which is handy if you want to revisit your latest earworm.

We like being able to access our entire music library in one app, although you do have to sacrifice a degree of control over your music files for the convenience. There's no way of knowing the file size or type of your songs – which tracks in your library are ripped WAV files and which ones are Apple Music tunes, for instance.

That can be a problem if you’ve got plenty of the former and would rather Apple didn’t replace it with a different version from its Music service. If you have rare B-sides Apple Music doesn’t stock, you’ll have to store the song files on your phone to play them – it's easily done via Apple Music on your Mac or iTunes for Windows on your PC, but worth mentioning nonetheless.

Searching is split into two filters: across Apple Music’s vast catalogue or within your own library. This might seem odd at first, but can be helpful when your collection grows and sprawls.

Where Apple Music excels is music curation. The For You tab is where all the fun happens, with Apple Music recommending artists, albums, and playlists that are tailored specifically to your music tastes and listening habits. And it’s spookily spot on.

When you first sign up to Apple Music, you’re presented with floating red bubbles highlighting various genres of music. Tap on the ones you like to give Apple Music a head start, then tap ‘Love' on any song or album you like and Apple will update your preferences to generate well-crafted playlists.

We’re impressed with how interesting the playlists are – not just in the song selection, but in the way they’re grouped and presented. From top hits to little-known tracks of an artist, influences on a certain band or a playlist focused on a songwriter or particular era, Apple’s curation is nuanced, thoughtful and intelligent.

There’s a real sense that the playlists have been curated by humans with an understanding of music, not just by a cold-blooded algorithm. Even the handful of words “Because you listened to…” in front of an artist or album recommendation goes a long way to making the user experience feel more personal.

The superb music curation also works a treat with Apple’s HomePod smart speaker, which is integrated solely with Apple Music. If you’ve got a HomePod, simply ask Siri to play your favourite tunes and it will always come up with a track you know or really like.

Spotify is no slouch when it comes to recommendations, but Apple Music’s little touches make it feel like everything is hand-curated for you. Apart from the weekly-updated ‘New Music Mix’ sitting in the For You tab, Apple Music doesn’t seem to push new music and chart toppers upon you as readily as Spotify and Tidal. They’re all hidden away in the Browse tab, where you’ll find the latest releases, exclusives, Full HD music videos, TV shows, and playlists galore.

It’s worth diving into each section as there are hidden gems everywhere, including countless playlists sorted by genre, activities and moods, often updated on a daily basis.

The more interesting and idiosyncratic music choices are when major artists such as Dr Dre, St Vincent, Stormzy, Elton John, Pharrell Williams, Major Lazer or Corey Taylor host their own regular shows. These are a hybrid of radio shows and podcasts, where you can re-listen to your favourite shows on-demand.

How often you’ll listen to Beats 1 live depends on the calibre of artist you follow – Apple is clearly relying on star-power to draw in subscribers. If you already have your favourite BBC radio shows, it’s unlikely to tempt you to switch allegiances, but they’re still fun to dip into.

In September of 2019, Apple iOS 13 added support for more than 100,000 live radio stations from around the world to Apple Music. You can summon Siri to play your top local radio station and get more genre-specific radio stations, or start a themed station based on an artist or song. Simply tap the heart/slash-heart icon to tell Apple whether or not you like the options it comes up with.

Annoyingly, Apple hasn’t disclosed the bitrate its songs are streaming at. We can confirm that the songs stored in Apple’s iCloud Library are 256kbps AAC (the same as your older iTunes downloads), but there’s no obvious way of telling how songs streamed in Apple Music differ over wi-fi or cellular.

What we can tell you is that Apple Music’s streamed songs sound clean, snappy and detailed. Compared with similar tracks on Spotify Premium (which are 320kbps Ogg Vorbis streams), Apple’s have greater subtlety and more space around instruments.

Dynamically, the sound is more fluid and exciting. Notes stop and start with punch, timing is good, and subtle shifts from quiet to loud are admirably handled.

Nirvana’s Smells Like Teen Spirit has plenty of wallop and attack. The grungy guitars are packed with texture and the noisy, sludgy, angry tone of the song is easily communicated. Kurt Cobain’s vocals are appropriately surly and mumbling.

Switch to something more polished, such as Charli XCX’s Boys, and the sparkly pop tune is slick and snappy. Her voice sounds loud, clear and expressive. It’s not as squashed-sounding as it is via Spotify, though you get a touch more openness and subtlety through Tidal.

Apple Music’s enjoyable and dynamic delivery is a more engaging listen than Spotify, so it’s worth considering if you want a step up in sound quality for a similar price. As always, we’d urge you to invest in a decent pair of headphones to get the best performance out of this streaming service – and because not everyone on the bus will share your music tastes.

Apple Music has come a long way in its relatively short lifespan, offering plenty of unique features that set it apart from the streaming herd. Die-hard Spotify fans may not switch allegiance, but we’d urge you to give Apple Music a go simply for how intelligent and engaging its recommendations are.

There are a plethora of ways to stream music these days, but Apple Music’s personal touches and nuanced curation simply make us listen to music more. And that can only be a good thing.