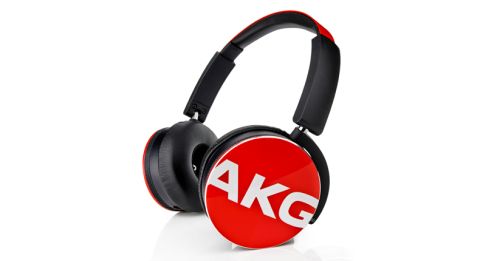 What Hi-Fi? Awards 2019 winner. Excelling in sound and style, the Y50s have been Award winners for five years on the trot

It only takes a passing glance to see these are AKG’s handiwork.

Sitting just below the flagship Y55 over-ears (£100), the Y50s are part of a three in-ears and three on-ears range.

Their bold look is perhaps a little out of character for the Austrian company, but it’s a clear step towards refreshing its entire headphone collection (which until now has largely consisted of the famous K Series) and attracting a younger market.

We like the creative design, but don’t mistake it for a low-quality gimmick – these are exceptionally well made headphones.

Portability isn’t an issue thanks to a neatly designed mechanism that lets them fold flat and collapse inwards for easy storage.

That could be in the supplied material case or, perhaps, a large coat pocket.

Despite the stainless-steel headband being wafer-thin, it’s durable – surviving a few yanks during our test – and ample cushioning underneath is good enough protection for your head.

The leather earpads sit firmly on the ears – physically blocking out external hubbub – though make them a little heated after an hour or so. Still, they should keep cool enough for a train journey.

The 3.5mm-ended cable also has an in-line remote for hands-free smartphone calling.

Their design might not be so typical for AKG headphones, but their sound certainly is. The Y50s don’t fall into the self-destructive trap of style over substance, sounding as cheery as they look with Pharrell Williams’ Happy.

Revelling in the song’s cheerful beat and quick tempo, top timing and rhythmic, punchy expression are their forte.

Balanced and insightful, there’s equilibrium between the song’s clap beats, chirpy vocals and ever-present cymbals – though, if anything, bass throbs a little over-enthusiastically with the drumbeat.

A throng of detail is revealed, the cymbals clearly present even when they’re just a whisper among the rest of the dense track’s noise.

The Y50s convey the immense sense of scale and power behind the orchestration in James Newton Howard’s Evacuation (from the I Am Legend soundtrack). Trombones soar and violins erupt as the orchestration comes to a head.

Dynamically sound, the Y50s effortlessly wind down during the more delicate moments too.

Again, finer detail prevails through the dense sections of the track, subtle xylophones passing through clearly, and the wordless choir prominent among the foreground instrumentals.

Is there a downside? They’re a touch on the quiet side; if you like things loud, turning up your device’s volume will drain its battery quicker than usual.

Otherwise, the Y50s don’t put a foot wrong as a pair of portable cans.

Though the funky design had us thinking they might be style-over-substance Beats wannabes, it’s just a smokescreen for what’s another great-sounding pair of AKG headphones.