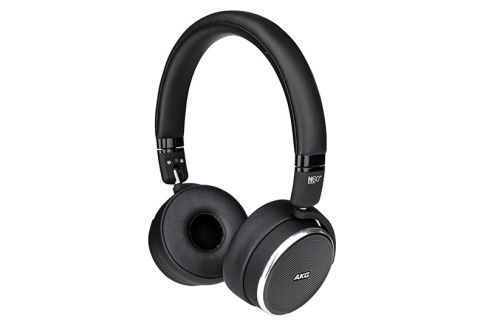 A great pair of noise-cancelling cans to keep in your bag, with wireless convenience to seal the deal

There’s a lot been said about silence. The Chinese philosopher Laozi said “silence is a source of great strength”, while Confucius believed it was a “friend that never betrays”.

At What Hi-Fi? we take a more practical view: it’s a great feature to have in a pair of headphones, especially when you’re in a busy office or on a noisy plane.

AKG’s N60NC Wireless are designed for just that. They are compact, convenient and affordable - in fact, they're one of the best wireless headphones we've heard at the money.

As the ‘Wireless’ part of the name suggests, the main difference between these headphones and the wired N60NCs is aptX Bluetooth 4.0 connectivity.

This means they will play along nicely with the increasing number of smartphones that are dropping the headphone jack.

If you want a wired connection, there’s a 3.5mm cable that comes in the box for use with non-Bluetooth kit or if your headphones run out of juice.

That shouldn’t be a regular occurrence, though – the N60NC Wireless have up to 15 hours of playback when used with Bluetooth.

Wireless operation automatically turns on the active noise cancellation (ANC). If you’re not using ANC, the 610mAh lithium-ion battery will last up to 30 hours before you need to recharge via the micro-USB cable.

There are some slight cosmetic differences between wired and wireless.

The wireless headphones have a metal connection between headband and housings, rather than plastic, which makes them more secure and (to our eyes, at least) better looking.

The headband itself has been made 10mm wider, and there’s slightly more padding too. This hasn't affected how comfortable these headphones are, and even those in our office who dislike on-ear headphones are perfectly content to wear these all day.

Their noise-cancelling prowess is as impressive as it is in the wired version, and can effectively cut out the background noise of busy streets or offices.

They’re still not quite as comfy as the Sony MDR-1000X headphones, but Sony’s over-ear headphones are larger and more expensive, so that’s rather to be expected.

These headphones are more the type to be slipped into a jacket pocket ready for a long train journey, or kept in a bag for a quick escape from the world’s chatter. The N60 NC Wireless are also more intuitive to use than other Bluetooth headphones we’ve tested.

Flick the connection switch on the right housing to turn the headphones on, or hold it down to go into pairing mode. Below it is another switch for playback - it also answers calls by pushing in.

Some people might prefer the look of conventional buttons, but this layout is more intuitive. No mistaking a volume button for the ‘Next track’ button here.

When streaming via Tidal, these headphones are clear and striking. They give good thump to the bass of (Sandy) Alex G’s Judge while remaining transparent enough to retain the papery quality of the drum.

The widescreen sound comes across well during Dave Grohl’s tighter coiled blasts of drums on Queen of the Stone Age’s No One Knows - smooth, earthy beats are delivered with detail and precision.

These headphones balance bass against midrange and treble nicely, handling a 44.1kHz FLAC of Queen’s Bohemian Rhapsody with a spring in their step.

As Freddie Mercury’s vocal enters, the piano is crisp and delicate, building delicately to the clear crash of sparkling cymbals.

There’s a lot going on in that song, with voices popping up left and right before suddenly disappearing – but the N60 NC Wireless keep track of every player in this battle of harmonies. There’s enough space to satisfy, and each comes across strong and resonant.

With the noise-cancellation blocking most sounds from getting between you and your music, the amount of detail rendered by these headphones is impressive.

Attention is drawn to the texture of the small finger-squeaks and -squeals at the beginning of Radiohead’s Paranoid Android, marking each time the guitar changes chord; dry acoustic strums reverberate nicely.

The rise and fall between those quieter thrums and the louder, powerful distorted twangs that end the song is quick and dynamically convincing, able to give a good punch of volume when the need arises. These headphones are fun to listen to.

They might have lost their cable, but the N60NC Wireless retain the superb character of their wired equivalents, and make a great alternative for those looking for something smaller than the over-ear noise-cancellers often recommended.

Compact, powerful and reasonably priced, these noise-cancelling headphones could be the go-to for those on the go.