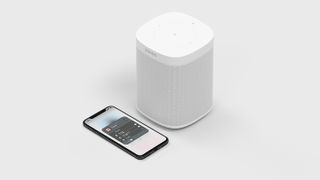 The rise of virtual assistants such as Alexa, Siri and Google Assistant has spawned a slew of smart speakers. The category's crammed with hands-free devices that play music, control your smart home, set alarms and much more.

The Sonos One is one of our favourites. It sound great for the money, supports Apple AirPlay 2 and offers Amazon Alexa and Google Assistant voice assistants. It's not the only dog in the park, though. The Bose Home Speaker 300 offers a feature-packed alternative, with support for Apple AirPlay 2 and a few extra features here and there.

So which is better? And which speaker is the smarter choice for those who want to build out a killer multi-room system? Read on and we'll see how these two wireless wonders stack up against each other, from sound quality to features to usability...

That said, you might be able to bag a deal on the Bose model. Check out the deals below to see the cheapest online prices.

Bose and Sonos both occupy the 'premium audio' space, so solid build quality is the order of the day here. Design-wise, they're pretty similar. Both are around 16cm tall and designed to blend into their surroundings.

The Sonos One is virtually identical to its predecessor, the excellent Play:1. It features a black or white grille, depending on the colour of the speaker you've chosen, with a touch-sensitive control panel on top.

Sonos has the jump on Bose when it comes to wireless audio tech – it's been in the multi-room game since 2002 and knows a thing or two about streaming. We found the Sonos to be extremely reliable, so you're unlikely to experience any wireless issues.

Enter the challenger. The oval-shaped Bose Home Speaker 300 is the baby brother of the Home Speaker 500, minus the LED display. The design is sleek but doesn't have the panache of the Sonos One.

The Bose scores over its rival with six handy presets on the top panel, which can be programmed to trigger your favourite radio stations or streaming services. A useful touch for those who aren't wedded to voice controls.

Worried about privacy? Both the Sonos and the Bose have a dedicated control to deactivate the microphone, making it easy to ensure personal conversations remain so.

Dodgy wi-fi? Both speakers feature ethernet connections, so you have the option to hardwire them to your router.

Look under the skin and there are some key differences. Bose has opted for a single full-range driver, which fires downwards into an acoustic deflector to radiate sound in 360 degrees. Sonos, meanwhile, has opted for a tweeter and a a mid-woofer, in addition to two Class-D amplifiers. Scroll down to hear which sounds best.

Ultimately, there's not much to separate the two at this stage of the process. Both are weighty and well-made, with touch-sensitive controls.  It's only when you fire them up that the strengths and flaws are thrown into sharp relief...

Both speakers offer Amazon Alexa or Google Assistant voice controls, and both have AirPlay 2, meaning Apple device users can send audio to the speaker from almost any app they choose.

However, while the Bose also streams music via Wi-Fi and Bluetooth, the Sonos One relies on Wi-Fi (or AirPlay 2) - there's no Bluetooth. Point for Bose, then.

The Sonos One impresses in other areas, though. Namely support for over 50 different audio streaming services including Spotify, Deezer, Tidal, TuneIn, Audible and Amazon Music. What's more, they all support voice controls out of the box, making the Sonos One the best choice for music streaming fans. Point for Sonos.

The Bose is stacked with features, too, including support for Spotify, Deezer, Amazon Music, Apple Music and TuneIn – all of which are integrated for seamless use. Your music is held in one place by the Bose Music app, which makes it easy to flick between radio and streaming services without launching separate apps.

Unfortunately for Bose, the Sonos app remains the best in the business for usability and for bringing practically every streaming service (and your own stored tunes) together under one roof. Spotify Connect is on board, too. Put simply, the Sonos app wins the day.

The Sonos One boasts two Class-D digital amplifiers tuned to match one tweeter and one midrange woofer. The resulting sound is impressive: weighty, full-bodied and engaging. Treble is crisp and clear; vocal are given space to breathe. All in all, the Sonos offers sophisticated and natural sound for the money.

How does the Bose measure up? Well, there are some big pluses. The scale and weight of the sound outshines most other speakers of similar dimensions and there's little trace of hardness – even with the volume cranked up to the ceiling.

But compared to accomplished rivals, whether it be the Sonos One or pricier smart speakers such as the Audio Pro Addon C5A or Apple HomePod, the Bose lacks dynamic range and timing. It saps rhythms of their energy and leaves melodies sounding a touch dull.

If you want the best sound quality, make a beeline for the sparkling Sonos – it's one of the most sonically advanced voice-assisted speakers for the money and certainly the better sounding speaker here.

Whether you opt for a Bose or a Sonos, you're not just buying a smart speaker – you're buying into an ecosystem. It's a bit like marrying into a large family...

Both brands offer an impressive range of compatible smart speakers and soundbars that are designed to work together, so you can add more devices to spread the sound to additional rooms.

So before you open your wallet, it's worth taking a step back and looking at each brand's family of smart speakers as a whole – especially if you plan to build out a single smart speaker into a multi-room system that supplies music to every nook and cranny of your home.

First up, Sonos. The US company continues to be one of the leading players with its long-established and well-developed multi-room system. Want stereo? Two Sonos Ones can be combined to create a stereo pair capable of filling a room. Need a home cinema system? The Sonos One doubles as a surround speaker for a Sonos Beam, PlayBase or PlayBar cinema system, with or without a Sonos Sub wireless subwoofer.

There's no need to part with your beloved hifi, either. Sonos's Port and Amp integrate traditional hifi components into a Sonos system. Last year, the company even released an 'architectural' range comprising in-ceiling, in-wall and outdoor speakers.

So when it comes to breadth of choice and simplicity, Sonos has nailed it. Buying into the Sonos family isn't cheap, but for versatility and streaming options, it's one of the best multi-room options. Only Audio Pro's system tops it for sound.

Rivals such as Bose have been playing catch-up, and with mixed results. The Bose family isn't as expansive as Sonos', but there are some gems. The Bose Portable Home Speaker is waterproof, has a 12 hour battery life and claims to deliver "deeper bass than any other portable smart speaker its size".

There's a choice of wireless subs – the Bass Module 500 and 700 – plus two soundbars with built-in voice controls, the Soundbar 500 and Soundbar 700. And if you want to beef up your Home Speaker 300, you can pair it with the Home Speaker 500, which features two powerful drivers that point in opposite directions to create a 'wall of sound'.

Reliable wi-fi streaming and decent sound are highlights across the Bose range, but the Bose Music control app lacks functionality compared to Sonos' app. If you're dipping your toe into multi-room for the first time, we'd recommend taking the Sonos path.

Since picking up the full five stars in our review, the Sonos One has cemented its place as one of the best smart speakers on the market. The combination of sleek functionality, ease of use, near-endless streaming options and sonic ability make it a no-brainer.

The Bose Home Speaker 300 has a similarly-impressive feature set but the Bose app, while intuitive, lacks functionality. Add in the unconvincing sound quality and there's no reason to plump for this three-star speaker over the five star Sonos One.