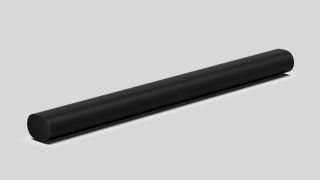 Sonos has just announced it's first Dolby Atmos soundbar, the Sonos Arc. Thanks to some early access, we've already dissected every detail and interrogated the engineers behind it in order to give you the full picture ahead of the 10th June release.

If you want to know everything there is to know about the new Sonos Arc soundbar that's about to replace the Playbar and Playbase, read on.

The Sonos Arc is specifically designed to partner the bigger TVs that are becoming more and more popular, with its width measurement of 114cm making it just a bit wider than a typical modern 49in TV. That also makes it significantly wider than the outgoing Playbar (90cm).

The Playbar was designed to work in two orientations depending on whether it was wall-mounted or placed on a piece of furniture, but we found that it sounded better in the wall-mount orientation. The Arc, perhaps predictably, is oriented the same way regardless of positioning (the bespoke Sonos wall-mount is a £79/$79 optional extra), and even automatically adjusts its frequency response accordingly.

Once in position, most of what you can see of the Arc is a 273-degree grille that hides the array of front-mounted and up-firing speakers. Each end also features a grille-covered driver.

The curvy design of the Arc makes it look rather svelte in pictures, but it is a not inconsiderable 8.5cm tall. That's unlikely to be so high as to encroach on your TV's picture, but it could conceivably block the signals being sent to it by your remote control - at least it could were it not for the integrated IR repeater.

The Arc's own status light consists of LEDs that shine through four of the drilled holes above the subtle Sonos logo (there are 76,000 of these holes in total). These LEDs respond to the ambient light in the room so as not to be distractingly bright when the lights are off for movie night.

Continue tracing a line from the badge and through the status light and you eventually run out of grille and hit the touch-sensitive play/pause 'button', which is integrated into the frame and flanked by two context-sensitive touch panels that you'll most often use to control volume. Follow that top edge to the right and you'll find the microphone button and a single LED that indicates whether the Arc is or isn't listening for Alexa or Google Assistant voice commands.

Around the back of the Arc you'll find the power socket, an ethernet connection for wired networking, and a single HDMI port. An optical adapter is included in the box for those with older TVs, but the intention is very much that you use the HDMI and utilise the ARC (Audio Return Chanel) functionality to get the sound from you TV to the Sonos Arc.

In fact, unlike the Beam, the Arc supports eARC (Enhanced Audio Return Channel), so that it can handle full-fat Dolby Atmos signals from those TVs that can output it. Sonos points out that there are now more than 25 streaming apps that carry content in Dolby Atmos (Netflix, Amazon Prime Video, Disney+ and Apple TV, to name just four of them), so it's becoming increasingly widespread.

The Arc's Dolby Atmos soundfield is generated by 11 Class D digital amplifiers that power 11 custom drivers. Eight of those drivers are elliptical woofers evolved from those in the Beam (four along the front, two on top and one in each end), while the other three are silk-domed tweeters that are all built into the front but with two firing diagonally into the room. You can see the arrangement in the short video below.

Sonos refers to the Arc's arrangement as 5.0.2, which might initially seem a little confusing but makes more sense when you think of the soundbar as attempting to replicate the soundfield of a five-channel surround sound system with no subwoofer and two height speakers.

For what it's worth, that '0' can be turned into a '1' through the addition of a Sub (of which Sonos has just announced a third-generation version), and other Sonos speakers can be utilised as dedicated surrounds just as they can be with the Beam, Playbar and Playbase.

The Arc uses its array of speakers to bounce sound off your walls and ceiling to create a 3D audio effect, and the sound is once again tailored to your room using Sonos' Trueplay technology. Despite the extra audio plane, the process is identical to that of the Beam: the soundbar outputs a series of test sounds that are measured by your iOS device (no, Android devices still aren't supported), first from the listening position and then from a wafty wander around the room.

While most people will likely never find the need, bass and treble can also be adjusted in the Sonos app, and the company's Loudness function can be disabled here, too. There's also a Night Sound feature that flattens dynamics and reduces bass, ideal for late-night viewing when you don't want to wake the rest of the household, while Speech Enhancement aims to project dialogue more clearly.

On the subject of the app, the Arc will run exclusively on the new Sonos S2 platform, which will launch on 8th June, two days before the soundbar itself. All of your other devices will need to be updated to S2 in order to work with the Arc, and it's worth remembering that some older Sonos devices are entirely incompatible with the new software.

While the S2 platform is apparently necessary for the introduction of new features, including the Arc's Dolby Atmos, the actual user experience doesn't appear to be vastly different than before. The Sonos app is still all about putting practically every music streaming service at your fingertips. The only operational upgrade we've seen so far is the option to create 'Room Groups', which allows those zones that are often used together (the kitchen and lounge, perhaps) to be linked more permanently.

It's easy to play music through the Arc without touching the Sonos app, though. Just like its siblings, it will appear as a playback device in the Spotify and Tidal phone apps, and AirPlay 2 allows for almost any audio to be sent to it from an iOS device. It can also be controlled via Alexa and Google Assistant, with the four far-field microphones that are spaced along the chassis using 'smart signal enhancement and multi-channel echo cancellation for easy voice control, even when the music or TV is blasting'.

Like the Beam, the Arc can also talk to your TV using HDMI-CEC. That means the Arc will turn on and switch to TV audio when you turn on your television, you can increase or decrease the Arc's volume using your TV's remote, and you can turn your TV on using voice commands aimed at the Arc. Add an Amazon Fire TV device or Google Chromecast to your system (plugged into another one of your TV's HDMI sockets) and you can even use the Arc to access specific content using only your voice.

We'll have to wait until we get our review sample before delivering our verdict on the Arc's sound quality, but Sonos is predictably talking a good game. The company has taken the same approach here as with previous products, which is to prototype and measure using some of the most advanced audio facilities in the world, and to combine that with real listening by actual human beings.

"It's so much more than just pointing a couple of speakers upward," says product manager Scott Fink. "Honestly, anyone can do that. For Arc, we really focused on the playback precision of all the channels, including the height channels.

"We spent months iterating on the curvature of the internal wave guides, revamping Trueplay to account for ceiling distance, angles and acoustics, and spending hundreds of hours tuning Arc with some really talented music, movie and TV creators who all actively produce content in Atmos."

Those creators Fink is referring to form what Sonos calls its Soundboard, which is led by Grammy-winning record producer (and son of a Beatle) Giles Martin, and includes creative luminaries such as Chris Jenkins, who has on his mantelpiece Best Sound Oscars for Out Of Africa, Last of the Mohicans, and Mad Max: Fury Road. It's the task of the Soundboard to listen to Sonos products, including the Arc, and ensure that they reproduce their work as they intended it to be heard.

In order to deliver on that creative intent, Sonos has always aimed for a fairly neutral tonal balance in its speakers, and the Arc is no different. As Martin puts it, "You don’t want to listen to the speaker, you want to enjoy whatever you’re enjoying, and not think about it - it should be completely natural."

It's also worth remembering that while the Dolby Atmos capabilities of the Arc will be what, quite rightly, draw most of the attention, Sonos users will demand that it sounds good with everything, including music. Interestingly, the Arc always utilises all of its drivers, even if the signal it's being fed is standard stereo.

Chris Davies, Sonos' senior director of audio engineering explains that, “Arc creates an ultra-wide soundstage by using highly optimised beam-forming arrays. These arrays bounce sound off of the walls in your room to create a truly immersive sound experience”.

When the Arc is handling surround sound signals, "a five-channel phased array optimises the phase and magnitude of each transducer", he continues, "for better control output at every angle, effectively steering the audio to match what happens on screen.

“When playing back music through Arc, we’ve used the arrays that we’ve created for home theatre to maximise on the music listening experience. The centre array creates a nice centre image, while the left and right arrays create an incredible wide soundstage."

So, if Sonos is to be believed, the Arc is the perfect soundbar. A product as well suited to some hi-fi-like listening as it is to a night of Dolby Atmos-powered home cinema. Of course, the company would say that, and whether it really delivers on that promise will have to remain a mystery until our review sample arrives. The Beam is an absolute cracker at the affordable end of the market, though, and we wouldn't bet against the Arc being a contender in the premium category.

That said, while its simple, stripped-back approach will be ideal for many people, those with lots of sources might find it a bit limiting, particularly if they've got a TV that struggles to pass through Atmos signals.

The Sony HT-ST5000, which began life at £1500 ($1500) but is now available for not much more than the Arc, has an array of inputs (and comes with a subwoofer), and some people will prefer that approach. The Dali Katch One, meanwhile, is an even simpler product than the Arc in that it eschews surround sound and streaming in favour of good old-fashioned fidelity.

It's these two excellent soundbars that the Sonos Arc will be battling in June, and we're looking forward to seeing which comes out on top.