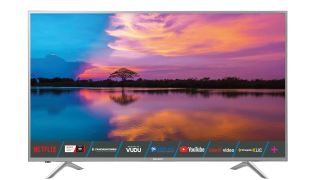 Sharp is a big name in TV. It always has been.

Sharp was the first to manufacture and sell Japan-made TV sets back in the 1950s. Sharp has broken the record for the largest ever LCD TV time and time again and Sharp was the first ever company to create a commercially available 8K TV.

Its sets may not be the go-to TVs that they once were back in the day, but they’re a) ever-present in two of the biggest US retailers in Best Buy and Walmart, and b) at prices tempting enough to turn your eyes from big (and pricier) TV brands like Samsung, LG and Sony. If it’s panel inches per dollar that you’re after, then look no further. There are plenty available on Black Friday 2019 and Cyber Monday.

Sharp TVs are 4K, HDR-supporting and fitted with the very popular Roku TV platform. But of course, buying a TV is about much more than just specs. So, should you buy a Sharp TV or shouldn’t you?

It's worth noting that if you're buying a Sharp TV in the US right now... you might not actually be buying a Sharp TV at all. The Sharp Corporation of Japan sold its rights to make and sell TVs under its name in the Americas (apart from Brazil) to Chinese TV company Hisense back in 2015 when Sharp was in considerable financial difficulty. So, for now and for the last few years, if you’ve bought a Sharp TV in the US, you’ve really bought a rebadged Hisense.

In May 2019, though, under new Taiwanese parent company Foxconn, Sharp had financially turned itself around enough to buy back those rights from Hisense and Sharp-made Sharp TVs are expected to go back on sale in the US some time towards the end of 2019.

Whether Hisense-made or Sharp-made, here are the Sharp TVs currently on the shelves...

Are Sharp TVs any good?

It’s important to preface this by saying that we’ve not reviewed many Sharp TVs at What Hi-Fi? over recent years and all the advice we have to offer is based purely on specs, design, on-paper features and our vast experience in the TV sector.

Looking at the Sharp TV, there are certainly some very interesting Sharp Q-series sets out there. The Q8000U, Q7500U, Q7000U and Q600U TVs are 4K sets, with HDR10 and (depending on the range) Dolby Vision support, all with smart TV platforms of one type or another and built-in Google Assistant voice control. Note that these are still 2018 models and are only sparingly available in the shops.

Instead, the main focus for the US market are the more mid-range Sharp Roku TVs which come in sizes between 24in and 58in, priced between $99 and $550 and stocked mostly by Best Buy, Walmart and Amazon.

Should you buy a Sharp Roku TV?

The plug-in Roku streaming devices became so popular in the US that some TV manufacturers started hard-baking the smart TV platform directly into their sets, negating the need for owners to buy a separate streamer. Integrated Roku TV means direct access to over 500,000 movies and TV episodes on popular US services such as Netflix, Hulu, Amazon, HBO, CBS and Sling TV.

You’ll still need to subscribe to each of these services separately, but there are also apps on the platform with free content like YouTube and Crackle as well as pay-per-view media too. With a clean, simple interface and such a complete platform for content, it’s an understandably appealing offer.

TCL, Hisense and Sharp are the major brands selling Roku TVs and, of course, for the time being, Sharp’s Roku TVs are made by Hisense anyway. For more information on Roku TV, head to our dedicated deals page.

The Sharp LBU591U Roku TVs are exclusive to Best Buy in the States. Available for $260 (43in), $281 (50in) and $360 (55in) they offer many more screen inches when compared pound for pound with the more recognised brands like Samsung and Sony. They have wi-fi, three HDMI sockets, a USB input and support HDR too. You can cast your mobile screen onto their displays, and while they’re not voice activated themselves, you can send them commands via an external Google Assistant or Amazon Alexa device.

If you’re in the market for a 55in Roku TV, you may come across the Sharp LC-55LBU711U at Best Buy. It’s currently priced at $290 for Black Friday, cheaper than the 55in Sharp LBU591U above, but offers no competitive disadvantage on paper.

The Sharp LB601U Roku TV range, again, mainly available at Best Buy, is a step down in resolution to a Full HD 1080p display. The specs are otherwise similar to the 4K models above. They still have Wi-Fi built in, they work with Amazon Alexa and Google Assistant, and feature three HDMI sockets and a USB input.

It’s worth bearing in mind that to upgrade to the 4K models is only a matter of $70 at the 50in size and that’s a relatively small price to pay for four times the pixels and HDR support. These Full HD TV aren't such a terrible deal at this price. Watch out, though, because even though the 24in and 32in Sharp LB601U TVs seem like a steal at $100 and $120 these two smaller sets only have HD Ready 720p resolution.

The Sharp Q7300U series of 4K TVs is the one member of the company's Q-series that does come with the Roku TV platform built-in (the Sharp Q7000U and Q7500 series do not). The bonus here is that they’re HDR-compatible and come with a beefier twin 10W speaker set-up.

They come in the form of the 58in Sharp LC-58Q7370U and Sharp LC-58Q7330U, as stocked by Best Buy and Walmart respectively. The two models are very similar and both feature Sharp’s Motion Rate 120 motion-processing technology, claim a superior processor for better HD upscaling and a noise reduction filter to help with that upscaled content.

The key difference is that the Sharp LC-58Q7330U is available at Best Buy for a very reasonable $350, while the $224 Best Buy Sharp LC-58Q7370U is an excellent deal but is an in-store only offer. Make sure to phone ahead.

Listed on Walmart and for sale on Amazon is a 55in model from Sharp’s top 2018 Q7500 smart TV series. On paper, at $800, the Sharp 55Q7530U is not a bad offer. It’s a 4K set with Dolby Vision HDR and HDR10 standards which should allow proper access to the lion’s share of top quality content. It runs on Android TV and includes built-in voice control with Google Assistant and it’s also compatible with Amazon Alexa.

At this price, though, it's worth seeing if you can find a better deal on a more recognised brand.

Instead, take a look at the $300 Sharp 58Q620U 4K Android TV. It has the same double HDR smarts as above and a few more inches on the screen too.

This time there’s no Roku TV here and no 4K either. The Sharp Q5000 series is Full HD only. The built-in wi-fi and Sharp smart TV platform mean that there’s still access to VoD apps like Netflix. The only other feature to shout about is that they have two USB ports instead of one.

You can pick the 40-inch Sharp 40Q5020U TV up at Walmart when available but it's currently out of stock.

If you’re happy to lose the Dolby Digital+ sound and, much more importantly, the smart TV platform, there's a refurbished 40-inch Sharp 40Q3070U also available at Walmart for $130. Of course, it’s possible to add Netflix et al using an external streaming device such as a Roku stick or Chromecast but, if you don’t already own one, then buying a Q3000 may be something of a false economy

The 32-inch version of the Sharp LC-32Q3170U from the same series is also available at Best Buy for just $135. The caveat here is that, not only is there no smart TV access but it’s only 720p resolution too.

The letter prefix to the Sharp model number refers to the year of manufacture and the P series TVs are 2017 models. While there are one or two available still on Amazon, their prices are similar to the equivalent later years’ sets, only without the more recent features. For this reason, they’re best avoided.

Without testing any of Sharp's older or newer models, it's tricky to categorically recommend a Sharp TV. At the time of writing there has been no refresh of the brand’s TV range.

But with technology, it’s all too easy to focus on the latest and greatest. When looking at a budget TV, it’s important to bear in mind what you do get rather than what you don’t. By and large, the current crop of Sharp TVs appear decent value if you pick the right one. The Roku TV access is a welcome feature and you get a lot of screen estate for your money. There are caveats, however.

We'd check the TV's price tag against the price of a similar sized Samsung or LG. If it’s close, you might want to consider one of these latter two brands because of their recent pedigree. It doesn’t take much research to see that Hisense’s customer support is wanting and that its sets don’t match for operational consistency with the big Korean manufacturers.

Also, while the Roku TVs are good, if you're not fussed about this feature, you might want to entertain a Sharp TV that doesn't have it. The Android-toting Sharp 58Q620U 4K HDR TV looks excellent value, for example, so long as you can track it down in your part of the US.

Perhaps the best value of all for the time being, though, is with the smaller, non-4K TVs which come in for around the $100 mark. The big manufacturers tend not to bother with this end of the market any more and if you’re looking for something simple for a bedroom or to hang on the wall in your kitchen, they should be a good bet. And if you can buy from a store which offers a comprehensive returns policy, then so much the better.