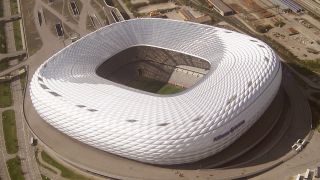 The Bundesliga is back, returning as the home of the European champions after Bayern Munich added the UEFA Champions League to their German league and cup double last season.

The Bavarian side joined Barcelona as the only clubs ever to have achieved two treble wins, and extended their run of Bundesliga crowns to eight. Is this the season that someone finally steps up to end their frightening domestic domination?

Unfortunately for the chasing pack, despite Hans-Dieter Flick's side having won 29 of their final 30 games last season, Bayern have strengthened again this summer – most notably with the addition of Leroy Sané from Manchester City.

Borussia Dortmund were the nearest challengers last season, but will need to be much improved this season having finished last term 13 points off the pace – not to mention maintaining their slender advantage over RB Leipzig, Borussia Mönchengladbach and Bayer Leverkusen.

Bayern will also feel safer knowing they won't have to face Timo Werner or Kai Havertz in this campaign, the pair leaving Leipzig and Leverkusen respectively to join Frank Lampard at Chelsea.

But this is arguably the most entertaining league in the world, where you tend to believe absolutely anything can happen. With things looking so set for another Bayern title win, this is undoubtedly the year they'll finish in the bottom two.

Below we have all the information on how to catch the action throughout the whole campaign, whether you want it on your TV, laptop, smartphone or tablet. So scroll down and enjoy one of the most exciting leagues in world football.

Alternatively, for £25 per month you can get all the action from the BT Sport app, without any subscription requirements.

BT Sport via the app for £25/m with no contract
You can get BT Sport without any contract or existing TV service with the company's own app. You pay £25 per month, which you can cancel at any time, and get all the services including its Ultra HD channel.View Deal

Sky TV and Virgin Media customers can also add the BT Sport channels to their subscription and enjoy all the live Bundesliga games shown this season.

Many of the service below also offer a free seven-day trial or longer. Well worth a go for a quick weekend of free Bundesliga live football.