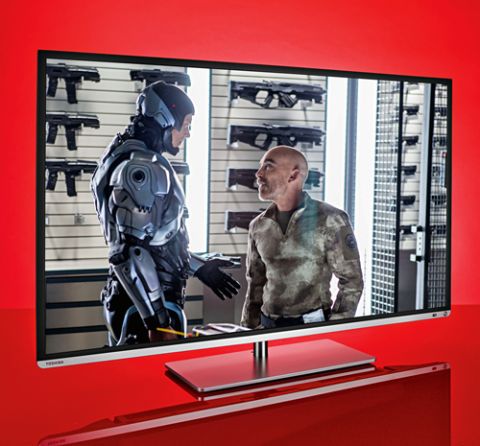 If you can overlook its lag issues, the Toshiba’s a good option if you stick with HD

The Toshiba 40L6353 has plenty going for it: a bright and vivid HD picture, Netflix, four HDMI inputs, two USB ports and a £400 price.

We’ve reviewed the 32in screen from this range and, perhaps unsurprisingly, the same strengths (bright, sharp, watchable picture with good smart TV apps) and flaws (slow to use, needs more insight) we found in the 32L6353 resurface on the 40in model.

Bright, punchy and relatively sharp, this screen delivers a strong performance with Freeview HD channels and Blu-ray films. Even if it isn’t the last word in subtlety, motion or balanced colours, it displays an enjoyable picture overall.

Play The Wolverine and the Blu-ray transfer is full of bright, natural scenes that the Toshiba delivers with aplomb.

White levels and highlights are vivid, although there’s a yellow-green tint that affects the colour balance and prevents the screen from delivering pure whites. Turning up the backlight contrast does add more punch though.

The colour palette can look a touch overblown next to the likes of the Finlux 40F8073-T and Samsung UE40F6400.

Toning the saturation level down helps, although green foliage never quite manages to get the weatherworn look and remains stubbornly vivid.

There are motion issues when the action gets heavy, but the blurring isn’t strong enough to hamper enjoyment too much.

We’d set the noise reduction setting on ‘Low’ to smooth out some speckling present in blocks of colour.

Watching standard-def channels, it’s clear the 40L6353’s upscaler isn’t as talented, even allowing for the inevitable drop in picture quality.

Old episodes of Top Gear look particularly sallow and focus takes a dive, too. We’d stick with HD content on this TV.

The Toshiba 40L6353’s sound quality is quite poor, even by flatscreen TV standards.

We had to turn the volume way up to gain any semblance of a tangible sound – and even then it remained quite coarse, wispy and hollow. There’s no texture to voices, not even a sharp edge to give them some solidity.

If you do take the plunge with this TV, we would urge you to pair it with a soundbar (such as the Philips HTL5120 for £250) or a soundbase (say, the Cambridge Audio Minx TV for £200) for a stronger, more detailed sound.

We were pleasantly surprised to see Toshiba’s 2013 Cloud TV platform on the 40L6353.

Not only does it offer the now-standard services of BBC iPlayer and YouTube, the smart features portal has a couple more video-on-demand services up its sleeve: Netflix is the big one, while Vimeo and Blinkbox are welcome additions. Deezer and Aupeo! Music, along with radio streaming services, are also available.

The TV’s network features operate via wired and wireless connection, but we found the wired option a more stable connection than the built-in wi-fi, especially on our crowded office network.

While the wireless set-up is fairly straightforward, we wouldn’t run the risk of our Netflix stream dropping out intermittently during a Breaking Bad marathon.

Other features on the Cloud TV interface include setting up your own user profile and Twitter feed, making Skype calls, and getting information such as the date and weather all on one panel.

It’s not the sleekest of layouts compared with Panasonic’s My Home Screen or Samsung’s Smart Hub, but we won’t grumble in the face of getting decent smart features for this price.

What we will grumble about, though, is how frustratingly slow and clunky the 40L6353 is to use. The menus are slow to load and even flicking across one panel to the next or scrolling through the programme guide can be a bit of a slog.

The remote control is also guilty of lagging, and the over-large and flat build isn’t comfortable to use instinctively.

You’ll need a bit of patience when using this TV: we had to stab at the remote control and then wait just a couple of seconds too long for things to happen.

There’s a good helping of connections on the 40L6353. Four HDMI inputs (one with ARC and another with MHL compatibility) are plenty for plugging in your digital sources, along with two USB ports for playing stored music and video files.

Composite, component and RGB scart inputs also populate the back panel, alongside a single optical output.

If you can live with the lag issues and clunky interface, then this Toshiba TV is worth an audition on the strength of its HD picture quality.

Given the great video on-demand and music streaming services it offers, we felt it would be too harsh to drop its rating down to three stars for simply being slow, especially considering its competitive price.

It’s by no means a perfect screen, and it lacks the finer subtleties and natural colour balance of pricier, more capable sets.

There is, however, a good amount of detail to keep viewers interested and the slightly overblown colours add drama, if not subtlety.

And if you watch Blu-rays and HD channels only, you’ll always be able to forgive its shortcomings.