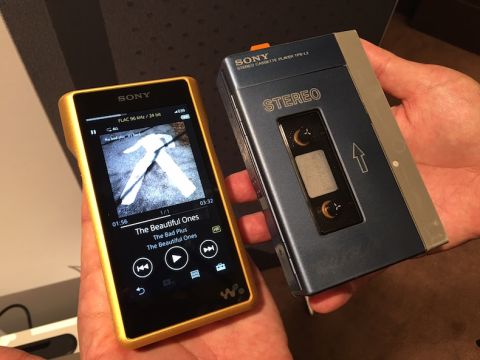 The NW-WM1Z heads up Sony’s brand new Signature Series of hi-fi products, all of which have a high-end, hi-res audio slant.

The range includes two new Walkmans, with the £2500 NW-WM1Z joined by a cheaper model, the £1000 NW-MW1A. But we couldn’t resist going straight for some hands-on time with the golden child...

Storage for the WM1Z is 256GB, but the microSD card slot on the base of the Walkman gives room for manoeuvre, should you have a digital archive full of hi-res tunes to transfer over.

On the back, you’ll find a similar leather patch and NFC logo to that found on the ZX2, the only difference being the Walkman logo is now gold-plated.

Besides the use of copper and gold on the chassis, the player features high-grade internals and even uses special braided cable, which runs from the amp to the headphone jack. It's been designed with help from hi-fi specialists Kimber Kable.

Its sibling, the NW-WM1A, is made from a solid block of aluminium, uses normal oxygen-free copper wiring between the amp and headphone jack and features a different type of resistor. The aesthetic is virtually identical, but the internal storage is smaller, at 128GB.

Grab hold of the NW-WM1Z, and the first thing that strikes you (besides the glow of that gold-plated finish), is the player’s size and heft.

It’s a chunky handful and weighs in at 455g - hardly surprising when you consider the player is machined out of solid copper.

We’re not quite sure how many owners would be brave enough to use this particular Walkman in public, not least because the weight could probably see your trousers dropping to antisocial levels.

So how does the gold-plating look in the flesh? 'Interesting' is one word that springs to mind, but Sony hasn’t chosen these materials for show, but because of the claimed audio benefits.

The NW-WM1Z is an evolution of Sony’s previous high-end Walkman, the NW-ZX2. You can see some of that DNA in the design of the new model, but on closer inspection, it’s a very different beast.

The edges of the new player are straighter and lines sharper. The player flares out at the top to accommodate both balanced (4.4mm) and unbalanced (3.5mm) headphone jacks.

Along the right side of the player are buttons for playback, volume and power. On the left, there’s a solitary slider button for putting the player into hold mode, in case you accidentally catch one of the controls.

The NW-WM1Z uses Sony’s own operating system instead of Android, which used to feature on some older Walkmans.

The knock-on effect is no wi-fi connectivity and thus no way to add third party apps to the player. Sony has done this to keep outside interference to a minimum. However, it does have Bluetooth and is compatible with Sony’s LDAC compression codec with claims to allow for higher quality audio playback compared to Bluetooth.

Sony claims there’s 256GB of storage built-in although this doesn’t seem to include the software on the actual player. Looking through the player’s menus we noticed that the player indicated just over 230GB was actually usable.

Also in the menus, we came across a setting called Battery Care. The description says it can maximise the life of the built-in battery by never charging it past 90 per cent - whether this means a few extra minutes, hours, days or months out of the battery remains to be seen.

Virtually all file formats are catered for, including AIFF, FLAC and DSD, ith Sony claiming a battery life of around 30 hours when playing 24-bit/96kHz FLAC files.

At 4in, the LCD touchscreen display lacks a little compared to the average smartphone, while the 864x480 resolution seems a little low for such a high-end product.

Sony has redesigned the touchscreen interface and the menus have been tweaked, so you’ll need to do a bit of extra exploring to familiarise yourself with the new layout.

Play a track and the album artwork takes centre stage, with file information at the top and touchscreen controls at the bottom.

In use, our sample of the WM1Z was a little slow to respond to our finger presses - the Walkman seemed to pause before it acknowledged commands.

Sony did inform us that this was a pre-production sample, and that the software is likely to be updated before the player hits the market in October.

Partnering the player with a budget pair of in-ears wouldn’t do the unit justice, so we reach for a pair of the new Sony MDR-Z1Rs that were being partnered with the player on the Sony stand. The headphones were brand new, as well as the player, so think of this as a sort of joint hands-on preview.

We connected the Z1Rs to the balanced input on the player using the 4.4mm jack, and played a couple of tracks at various bit-rates.

We started with a 24-bit/48kHz FLAC file of Chvrches’ Leave A Trace. The catchy synth pop sounds smooth and refined with loads of detail. There's a decent sense of solidity and richness to lows, while the lead female vocal sounds similarly rich and inviting.

Next we play Madonna’s Open Your Heart. Again, a FLAC file, but with the bit rate increased to 24-bit/192kHz.

There seems to be a step up in terms of detail, with the Sony maintaining its rich, refined character. It's an easy listen, but not so polite that it doesn’t sound entertaining.

Sony is taking hi-res audio seriously, and has definitely made a statement with its new Signature Series and the NW-WM1Z.

Hopefully the finished production model can push the boundaries of what we’ve come to expect from portable audio players. One thing’s for certain, though - you’ll be the first to know.