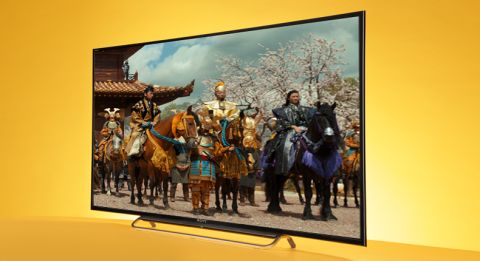 A good picture for a good price, this TV is well worth considering

If your collection is a mix of DVDs and Blu-rays, this 48in LED-backlit LCD TV is worth considering: both standard- and high-definition content shine on this set.

Play The Lord of the Rings: The Two Towers DVD and straight away its flair for upscaling is clear; its crisp, detailed picture is pleasing.

Close-ups of Orcs’ faces are detailed, as are skin-tones, while picture noise is at a minimum. The Freeview HD TV tuner keeps its end up too: SD (and HD) programmes are bright, with excellent contrast.

We turn to Schwarzenegger and Stallone’s latest team-up, Escape Plan, on Blu-ray and the Sony duly ups its game with high-definition fare.

Crisp and insightful, there’s plenty to keep you glued. As well as running the TV through the THX Optimizer set-up procedure, we switch its colour temperature from ‘Standard’ to ‘Cool’ (there’s ‘Warm’ also) for a more convincing colour balance.

The Samsung UE48H6400 has deeper, richer hues, but we still like the Sony’s nicely judged palette.

Skin-tones are natural-looking too, and contrast is impeccable. After optimising picture settings, whites are pure but not too pristine, and blacks are some of the darkest we’ve seen (although low-level detail often perishes in the shadows in some scenes).

Motion is stable and blur-free, staying poised during the prison punch-up scene as the camera jumps around.

It isn’t as smooth as we’d like, though turning on the set’s motion-processing helps slightly (while encouraging some blur, though).

When it comes to audio, the Sony sounds unusually lightweight with its two puny 8W speakers. We often recommend a soundbar to bolster a TV’s sound – here it’s more of a necessity.

Meanwhile, inputs include four HDMI, two USB, Scart, component and composite, while on the back panel are optical and headphone outputs.

Sony brings its own features to the specification list too: the highlight being the pay-per-view Video and Music Unlimited streaming service.

There’s also a new Football Mode, which activates Sport picture mode and surround sound to amplify atmosphere. We find these somewhat ‘in-your-face’ though.

The Social Viewing feature is handy: it generates a ticker-tape Twitter feed (based on what you are watching) on the bottom of the screen and Sony’s interface has had a much-needed lick of paint – a new full-page grid layout replacing the old horizontal strip menu.

Sony’s Entertainment Network portal has a web browser, and BBC iPlayer and 5 On Demand are alongside Netflix, Amazon Instant Video and Blinkbox; YouTube and Skype are here too.

There’s no smart remote to be found. Instead, Sony’s TV SideView app is brilliant (free to download for Android and iOS) and accompanies simple control operations with a well-developed EPG and the ability to record programmes.

The Sony remote is one of the better examples: tall and narrow with orderly buttons and neat shortcuts to Home, Netflix, app gallery and Discover.

The TV itself has a simple, unfussy design, and is surprisingly lightweight at 10kg.

It’s well-supported by a shaped metal frame, which doesn’t stick out behind the screen like many do and so doesn’t require a big surface to stand on.

All things considered, this is a competitive performance at a competitive price. Is it the kingpin of the competition? Not quite – no 3D will be an issue for some. Yet this is still an impressive telly.