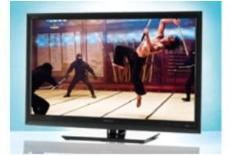 For once, dodgy backlighting doesn’t entirely ruin a Sony five-star bid – Philips has helped out, too

Sony's approach with its Freesat TVs is simply to take a model from its existing line up, add a Freesat tuner, and slightly alter the product code.

Hence the KDL-40Z5800 is the Freesat version of the range-topping KDL-40Z5500. That means it's got some fancy features, like Motionflow 200Hz, web access and network streaming via ethernet, four HDMIs and the company's Bravia Engine 3.

Typically impressive motion
That all adds up to a very impressive performance. As with many Sonys, the biggest strengths are the motion processing and contrast levels.

The first ensures that whether the TV is being asked to reproduce slow pans or fast action, edges always remain sharp and judder-free. And, unlike motion processors offered by rivals, there's little of the artificial look to annoy those who are sensitive to it.

As for contrast, the 'Z5800 produces punchy whites and deep, black backgrounds. Crucially, though, where Sonys were once the very best in this regard, some rivals have now surpassed them.

It's a similar story with detail. Play Slumdog Millionaire on Blu-ray and in isolation the Sony looks impeccable, reproducing the Mumbai slums with incredible insight and palpable depth.

Looks ordinary against rivals
The problem is that you switch on one of the class leaders and the Sony suddenly looks ordinary. Sure, you'd expect there to be gap because of the price difference, but the enormity of that gap is a big surprise.

The Sony's still a great performer, mind. Its colour balance is brilliantly judged, and ensures that when you switch down to DVD or Freeview, everything remains vibrant, controlled and natural.

Images from Freesat broadcasts are marginally cleaner and a touch more vibrant than on Freeview, but otherwise there's little difference.

Backlighting issues
And the backlight? Well, the '5800 is better than many Sonys we've seen in this regard, but there are still cloudy patches that are occasionally noticeable.

This is clearly a quality-control issue, so although our sample suffered from backlight issues, you may well find a set that doesn't – try before you buy.

So perhaps the most important question is whether the KDL-40Z5800 would get five stars if it had perfect backlighting. And the the answer is no – the competition is just too good.