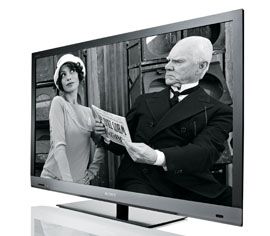 Don’t be thinking that affordable billing means that the Sony KDL-40HX723 is remotely basic.

Not only does it feature HD tuners, smart TV applications and 3D playback, but this Sony is in fact one of the better-specified models in Sony’s entire range.

It’s a ‘Dynamic Edge LED’ screen, which means it’s an edge-lit display with local dimming of individual groups of LEDs – which, in theory, means better performance.

It also has a 200Hz refresh rate and comes with Sony’s Motionflow XR 400 and the X-Reality Pro engine.

Sony’s internet TV offering is one of the strongest in the market, though you have to look for it. Divvied-up around different parts of the interface you’ll find BBC iPlayer, Demand 5 and the Sky News app.

As well as LoveFilm and YouTube you’ll also find Sony’s Unlimited Video and Music services, giving you another way to stream movies and music. There are apps for Skype and social networking, too.

Solid motion, but colours lack punch
Watching the Freeview HD tuner certainly gets us off to a good start, providing the necessary detail and subtlety to enjoy, say, Bargain Hunt to its fullest. Sky Sports News shows the Sony is no slouch with motion, either.

Colours aren’t the boldest but on most occasions this more measured touch works fine.

The Blu-ray of the excellent Attack The Block has testing low-lit scenes and plenty of dynamic action, and only here we do start to want for a little more punch in brighter scenes; the colours are a little too subdued.

The lacklustre feeling of the picture isn’t helped by tentative black levels. Still, pictures are sharp and clean, and the level of detail is good.

It’s more of the same with 3D. The effect is smooth, and delivers a good sense of depth while remaining relatively comfy to watch and largely free of crosstalk. But drained of the punchiest colours, the picture can look a little limp.

This is another solid and affordable screen, and ideal if some of the latest internet-enabled functions or the Sony-specific frills appeal.