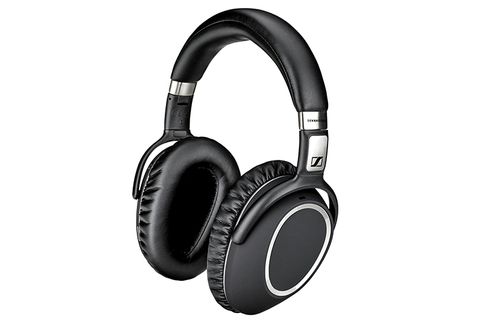 Pepsi and Coca Cola, Gibson and Fender, Xbox and PlayStation: brand wars at their finest. Bose and Sennheiser could make that list too, for when it comes to producing noise-cancelling headphones, the rivalry is rife.

The battle began in 2007, when the multi-Award-winning Sennheiser PXC 450s lost their What Hi-Fi? Awards crown to Bose's QuietComfort 15s – sparking a contest of one-upmanship that has lasted ever since.

Sennheiser married noise cancelling and Bluetooth for the first time in its Momentum 2.0 Wireless (£380), and Bose has replied by applying the same functionality to its QuietComfort 35s (£290).

Now, right on cue, we have the Sennheiser PXC 550 Wireless: noise-cancelling, wireless follow-ups to the PXC 450s, and more affordable options to the existing Momentum 2.0 Wireless model.

Having two similarly priced, similarly featured models in a headphone line-up may seem odd, but Sennheiser says the PXC 550s are aimed at the ‘discerning business traveller’.

‘Fruity’ seems an unusual adjective to describe a pair of headphones – especially ones as polished and businesslike as these – but with its thick extra cushioning in the middle and silver metal details at either end, the headband is banana-shaped, while the oval ear cups are like enlarged pear drops.

Ergonomically, that makes sense for cushioning the PXC 550 Wireless’ 227g weight and covering your ears as over-ear headphones should.

Despite all the technology crammed into the cups, they are surprisingly trim. Their tastefully classic matte black finish looks thoroughly suited to sit atop the head of Sennheiser’s target audience, presumably City AM or Financial Times readers.

With a pricetag of £330/$300, these Sennheiser headphones might cost more than the average Joe might ordinarily spend on headphones, though anyone looking to defend the spend here should know that they won’t have to shell out for new earmuffs next winter.

The thick leather pads hug your ears – snug, not too oppressive – and do a good job blocking out external noise.

That level of isolation – the ‘alone time’ promised by manufacturers – is taken further by two levels of NoiseGard Hybrid active noise-cancellation, the same technology featured in the Momentums.

Activated by a switch above the Bluetooth pairing button – also used for choosing ‘club’, ‘movie’ or ‘speech’ sound modes, though for music playback we’d leave them off.

On the battery front, the PXC 550s have a claimed 30 hours of noise-cancelling duty before they need a top-up via the USB-type B charging port, though invariably that number will take a hit when listening wirelessly.

When it’s flat, a cable for wired listening can slot into 3.5mm socket on the right ear cup so the music doesn’t have to end when the battery does.

That’s complete with a one-button in-line remote for general call and playback controls, though during wireless playback the touch-sensitive controls built into the right ear-cup are your go-to instead.

Tap the cup once to pause/play and answer/end calls, and swipe your finger up and down it to change volume.

It’s a neat concept that’s been adopted by a few brands, although it is rather too easy to accidentally pause a song by brushing your hand over the headphones.

Apps for cans seem to have caught on too, and that’s where Sennheiser’s CapTune comes in. While not necessary to operate the PXC 550s, it’s worth a look for its music player, battery status indicator and EQ settings adjustments.

The Sennheisers fold and can easily be scrunched up in a ball and slotted into their soft material case, but there’s more to it than that.

Taking the effort out of pressing buttons, it powers up automatically when unfolded – or, more specifically as the right ear cup twists open – and turns off when folded.

The PXC 550 Wirelesses sound lovely, but are they as good as the slightly pricier Award-winning Momentum 2.0 Wirelesses? With both using the same noise-cancellation technology, you can wave goodbye to traffic noise and office hum.

When it comes to performance, however, the Momentums edge them with greater clarity and expression. But the PXC 550 Wirelesses allow Sennheiser to edge ahead in the brand war, by proving clearer and more rhythmically surefooted than the Bose QuietComfort 35s.

In Jamie xx’s Obvs, there’s a lot of tune competing for your attention – the overlapping rhythms of drubbing beat and shakers that roll over the top of steel drums – but thanks to the Sennheiser’s roomy, open soundstage and dependable footing, the presentation is arranged and orderly; each note hits the mark within a presentation that sounds naturally, almost effortlessly, together.

Detail tumbles through each earcup before falling precisely into place, the Sennheisers dynamically meticulous enough to carry the burden of each piano note in Eluvium’s Happiness, however slight.

Yo La Tengo’s Ira Kaplan accompanies the instrumental lullaby with his pensively deep vocals. Thanks to the PXC 550’s midrange, it sounds just like a ballad should: full of emotion.

The presentation is fair and proportionate, the ambient instrumentals sounding solid and rounded, but never without energy or bite.

The drivers dig deep when the majestic underlying bass comes in, although not for the first time in a pair of Sennheiser cans, it can feel a little bottom-heavy.

That’s more of a statement than a criticism, though. While certainly rich, it errs just on the right side of overstated, and is careful not to slow rhythms or weigh down dynamics.

Balance still favours the low-end through the wire, albeit there’s a noticeable leg-up in refinement.

It’s not massive, though, and that’s only further testament to the maturity of the Sennheiser’s wireless performance. We’ve said that before. And this too: over to you, Bose.