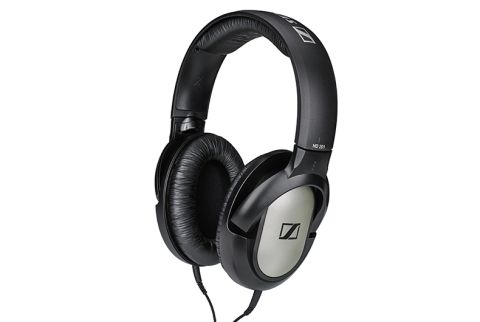 Back to basics for these budget Sennheisers

There are a lot of things you can buy for £17 – four boxes of 20 Chicken McNuggets with BBQ sauce, for example, or a standard Blu-ray disc on release day. Or, indeed, the Sennheiser HD 201 headphones.

These budget Sennheiser headphones are neither new nor particularly advanced. Nor are they shiny or packed with fancy hidden features.

Frankly, these over-ear headphones are as basic as they come, and it’s a small miracle that the HD 201s have survived in the cut-throat headphone market for the best part of ten years.

Then again, they are cheap. We normally don’t like using that word, but there really is no getting round it in this instance. The Sennheiser HD 201 headphones are seriously good value for money - and there’s nothing wrong with that.

Pick these Sennheisers up and ‘cheap’ is undoubtedly the first word that springs to mind. The entire construction is the light and bendy sort of plastic you might associate with airplane headsets, along with thin plastic ‘leather’ on the earpads and headband.

While that thought may not have you salivating, consider the sheer amount of abuse that those airline headphones go through on a daily basis.

The Sennheiser HD 201s are tough and will happily survive being thrown about or squashed in a rucksack. It’s an important factor, considering they don’t have hinges and cannot be folded up.

There’s no microphone or remote control on the cable, which is attached to both earcups and cannot be removed. It is also three metres long and prone to tangling, so think twice before taking these out and about.

MORE: 6 of the best wireless headphones

They are comfortable, though. They are so lightweight that you can wear them for hours without your neck complaining, although your ears might get a little warm. The clamp force put upon the sides of your head is gentle enough that you’ll never feel squeezed.

On the flipside, noise isolation isn’t great. Though a closed-back design, the HD 201s do little to block out background sounds.

It would be entirely understandable to expect inferior sound from a pair of headphones costing £17, but while the HD 201s are far from the best we’ve heard, they are surprisingly competent performers. Their key strengths are insight and balance.

The level of clarity is such that instruments and vocals, while not as explicit as we might like, are apparent enough to paint a fairly detailed picture.

It’s not the sort of fine detail that lets you identify exactly what’s going on, but it’s not broad, mushy strokes, either. Leading edges are solid enough to do the job.

As for balance, the Sennheiser HD 201s put out a tonally even performance that is acceptable and likeable across the whole frequency range. The top end is never hard and the midrange is fairly direct.

There’s enough bass too, even if it doesn’t reach the depths required to make the most of Massive Attack’s Angel.

Then there’s the matter of timing. The HD 201s have a firm grasp of rhythm, and while we’ve heard more agile headphones, they do a good job of conveying the snap of Prince’s When Doves Cry.

If you’re after headphones that make you drum along on your desk, these will do nicely.

The one area that really could do with some work is dynamism. The HD 201s don’t make the most of the dynamic shifts so prevalent in most of Prince’s output, and the result is more flat than funky.

We want more power behind that attack, and these headphones just don’t have it in them. So while it’s a perfectly coherent listen, it’s not the most entertaining one.

What did you expect for £17? We must admit we are pleasantly surprised. The Sennheiser HD 201 headphones are far from perfect, but they are likeable and, for the money, very competent.

Sure, there are better headphones out there, and there are a few things we would fix about these. But if you’re attracted by that low price, there aren’t many options that offer such good value for money.