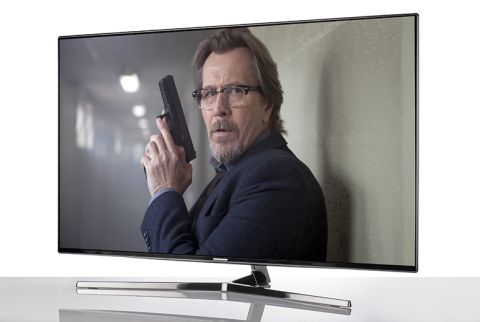 In the battle of curved TV versus flat TV, most people sit firmly in one camp or the other. If it’s the former, Samsung’s 2016 range of TVs has you covered.

If it’s the latter, you are a little more limited. This means, in absolute terms, the Samsung KS8000 is the company's flagship flatscreen range for 2016.

It’s not small on features though, and packs both 4K and HDR, with an almost identical list of specs as its curvier KS9000 sibling.

Like the KS9000, the KS8000 features Samsung’s '360-degree design', which offers a super-slim bezel, stylish central stand and an almost unblemished back panel.

A small flap lifts to unveil a USB port and ethernet connection, with other inputs – including four 4K-ready HDMIs, an optical input, two further USBs and both satellite and terrestrial connections – found on Samsung’s OneConnect box.

The Quantum Dot display ticks all the boxes for a UHD Premium logo, including 1000 nits of peak brightness. Not bad for an edge-lit display.

Samsung’s Tizen operating system has seen some welcome tweaks this year. It’s now faster and more intuitive, and adds a second row of exploded content and suggested next steps along the bottom of the screen.

This could mean a list of sources or quick settings without needing to open up a full settings screen, suggested content from your Netflix and Amazon watch lists, or YouTube videos from your subscriptions.

Catch-up services such as BBC iPlayer and ITV Player are also at your disposal.

With so much tech, something has had to fall by the wayside, and that’s 3D. As with all Samsung’s 2016 TVs, the KS8000 has no 3D functionality, which is worth considering if you have a library of 3D discs.

Set-up is nice and simple, with the UE49KS8000 walking you through the main settings for getting channels loaded and network connections sorted, plus it will also help you to add sources by recognising and naming them automatically.

The included smart remote doubles up as a universal remote for compatible kit too, and is able to deliver basic commands to devices from all manner of manufacturers.

Picture controls are hidden away under 'expert settings', leaving simpler modes such as Movie, Standard, Natural or Dynamic front and centre.

Of course, you should dive straight into settings to tweak these further – we opt for Movie for the most natural handling of colour, and calibrate using our THX Optimizer disc.

The only extra settings we find of much use are the Smart LED local dimming setting, which helps to get blacks a little deeper when set to low (it defaults to high for HDR content), and the motion controls – we’d try setting low custom values if you feel the need, as the KS8000 doesn’t require much help in this department.

All these settings will change the moment the TV recognises an HDR source, boosting the backlight up to its maximum, among other things, in order to make the most of your HDR content.

The Samsung UE49KS8000 will automatically revert back to SDR settings once the HDR source is turned off.

We play a 4K HDR disc of Mad Max: Fury Road to see how the KS8000 copes with the movie’s striking visuals. On cue, the backlight jumps into action to deliver an impressive level of brightness we wouldn’t usually expect from an edge-lit set.

The burnt-orange desert wasteland looks rich and vibrant, displayed with more depth, nuance and intensity than you would get from SDR content.

Highlights are just as striking but avoid looking one-dimensional, delivering subtlety and detail to the likes of sunshine and clouds.

There’s real insight elsewhere too. The costumes that bagged this film an Oscar are sharply etched and superbly realised, with enough fine detail on display so you don’t miss a stitch. Textures appear true to life, skin-tones wonderfully judged.

It makes for a wholly immersive picture that’s just as stunning as we found on the curved Samsung KS9000, with colours across the board managing to tread that fine line between punch and believability. Black levels could be a little better though.

Even with the Smart LED setting turned up to its default high for HDR content, we’ve seen deeper, more convincing blacks on sets such as the Panasonic DX902.

This isn’t helped by Samsung’s edge-lit tech – now lit from top and bottom rather than from the sides – which isn’t quite as accurate in its dimming as a full array set is.

We also notice a touch of vertical blooming when a bright object is in shot, just as we did on the KS9000. It’s not too distracting – it’s only really noticeable in a very dark room – but is a limitation of the KS8000’s capabilities all the same.

It’s much less obvious with SDR content though, mostly because the backlight setting is much lower. As a result, blacks are better, and cling on well to shadow detail in murkier scenes.

Drop down to standard Blu-ray content, or even broadcast TV, and you won’t see a huge shift in character, thanks to the decent upscaler Samsung has on board.

Detail levels naturally take a step down with every compromise in quality you make, but ultimately it remains a sharp, natural and well-judged picture.

We don’t often hold out much hope for sound from TVs this slim, but the Samsung KS8000’s 4.1-channel setup with its claimed 60W of power certainly holds its own.

There’s enough weight here to give body and authority to voices, and it keeps its cool even when the volume is pushed high.

Samsung has clearly worked hard to ensure the KS8000 doesn’t sound bright or thin, but appears to have erred on the side of caution.

More bite in the top end would give the UE49KS8000 the chance to be more expressive – and a more engaging listen.

The Samsung UE49KS8000 TV squeezes a lot of tech into a sub-50in screen, making it a tempting buy for the size-conscious consumer wanting a high-end 4K upgrade.

If you have shunned the trend for curved TVs, the UE49KS8000 is by far the best flatscreen Samsung set we’ve seen this year. It should make it high on to your shortlist.