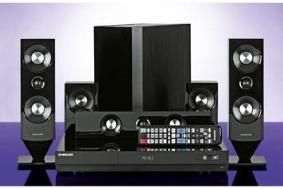 Packed with features, but the Samsung isn’t quite the complete performance package

The level of style and specification that the Samsung HT-C6500 offers is all the more impressive when you see the price tag.

Granted, the satellite speakers feel a little cheap once you grab hold of one, but they're veritable works of art to look at compared with the rather drab satellites on some other systems.

The main Blu-ray receiver is slim and stylish, and comes adorned with touch-sensitive control buttons on top and a raised bump on the front of the unit that is, in fact, a touch-sensitive volume control.

Good specification
The receiver sports a handy, although not excessive, pair of HDMI inputs, in addition to a single optical digital socket and proprietary input for the iPod dock that comes in the box.

The 'C6500 is DLNA certified for media streaming (Samsung refers to this feature as Allshare) while the single USB input allows for playback of various media files, including DivX HD and Xvid.

Samsung has also been able to squeeze in 1GB of memory and wireless connectivity. This allows you to use Internet@TV, Samsung's online service that gives you access to content from providers such as YouTube.

The system is intuitive and you're helped by a simple yet effective and responsive remote control and menu system.

The Samsung also includes an automatic speaker calibration system. We found, however, that although the speaker distances were fine, the levels still needed some manual adjustment. And, on one occasion, our review sample decided to reset the speaker settings for no apparent reason.

Once you're finally up and running, the 'C6500 produces a solid, substantial and agreeable sound. The Samsung is one of the quickest to load Blu-ray discs, and soon enough, the action and dialogue during Saving Private Ryan allow the system to show off its weighty and full-bodied delivery.

Not quite the best
When pushed, it doesn't quite have the dynamic clout and vigour of others, but it's a good effort.

Picture quality is decent for the money, but you don't get the same sense of clarity and realism that you do from the top systems.

Play Batman Begins and during the swordplay between Christian Bale and Liam Neeson, you'll notice that the image lacks just a little stability and doesn't give you quite the same level of fine detail that other systems manage to provide.

Still, when you consider the price, Samsung deserves huge credit for squeezing so much into this package.