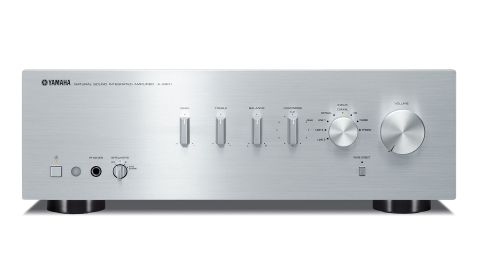 The A-S301’s performance has many of the things we like best about Yamaha. We just wish it were more excited to meet us

What constitutes a budget stereo amplifier? It’s a tricky question to answer, and one where the responses from hi-fi manufacturers and the average customer seeking to invest in an entry-level system are likely to differ.

Regardless, the market for sub-£200 integrated amps is thinly populated, and it has been a good few years since we last had a new one to review. So, we were eager to welcome the Yamaha A-S301 into our testing rooms, and even more pleased to report that it sounds good.

The A-S301 certainly doesn’t look or feel like a budget component. Its thickset dimensions may put off those seeking to hide their system away, but we’re big fans, especially given the bold and hugely tactile mono-brow of dials and switches punctuating its face.

Those dials are for volume, input selection, left/right balance, loudness, bass and treble adjustments. At the front, you’ll also find the power switch, headphone output, A/B speaker selection and a button for turning on Yamaha’s Pure Direct mode, bypassing tone controls and sending the signal via the shortest circuit route.

As well as a range of RCA analogue inputs, the A-S301 covers digital with one each of coaxial and optical connections, as well as having a phono stage built in for turntables with a moving-magnet cartridge.

These are all found at the back of the unit, as are the amp’s two pairs of speaker terminals and subwoofer output, 5V DC USB power socket and selectors for high or low impedance and switching on or off the Yamaha’s timed standby mode.

Despite being a little lightweight, we can’t complain too much about the one-size-fits-all remote Yamaha has packaged with its amp; getting anything extra with an amp at this price feels like a steal. Bluetooth costs extra via an add-on – Yamaha suggests its own £90 YBA-11 module – but that is hardly a criticism.

Besides, filling the A-S301 with much more technology could run the risk of degrading what we like best about it: its sonic performance.

Despite the A-S301’s budget price tag, the character is very much in line with what we’ve come to expect from Yamaha: it’s bold and full-bodied, in many ways echoing the amp’s chunky aesthetic. Midrange performance is a particular forte, with voices having a pleasant warmth that makes this an exceedingly easy listen.

Though the balance is most naturally even with bass and treble dials set to 12 o’clock, we would suggest playing around a little. There’s certainly no lack of bottom end to the neutral balance, but twisting both 90 degrees to the right can be fun for bass-heavy tracks, keeping enough top end dialled in while increasing our portion of low frequencies. It’s hardly subtle, but sometimes you want a little extra thump, so long as it doesn’t stray toward being egregious.

Dynamically, the A-S301 is also a fine performer for the money. There is light and shade to tracks, with the Yamaha displaying a competent understanding of low-level and large-scale shifts. It isn’t perhaps as musical an amplifier as its main Onkyo rival, but there is insight enough to keep us from drifting off.

It doesn’t time badly, either. All parts feel as if they’re generally in the right place; our only qualm is that they don’t appear particularly excited to be there. It’s not so much a lack of punch, or rhythmic laziness, but the performance just lacks that sense of excitement and drive that keeps a track moving.

It’s the kind of amp we feel happy talking over, even at relatively high volumes, without having to interrupt ourselves to listen. We’re enjoying listening to our music; we simply aren’t forced to give it our full attention.

While a slight lack in detail and granular insight is excusable, especially at this end of the market, without this kind of true rhythmic sense and musicality, we struggle to be completely enthused.

Though the Onkyo A-9010 is able to better Yamaha in that respect, the A-S301 is a worthy rival. Its full body and range of features is a draw, and we’re struggling to imagine anybody being  disappointed if they took one home.

So, while we aren’t yet scrawling another name on our list of truly exceptional budget amplifiers, in the Yamaha A-S301, we have found a sub-£200 integrated amp that is well worth considering.