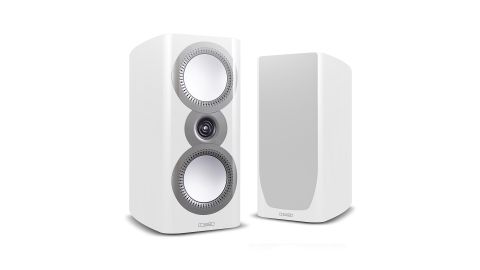 Judge the Mission ZX-2s on anything other than sound quality and they would be considered one of the class leaders. They feature cutting edge drive units that, on paper at least, match or better those used on most price rivals and sport clean, classy aesthetics that look great to our eyes.

Add what appears to be highly aggressive pricing and you have boxes that should have the best at the price quaking on their stands. Yet, one look at the star rating at the top of this review makes it clear that they don’t.

We’re surprised by this. Mission has been on a good run in recent years, and as part of the IAG group – alongside the likes of Wharfedale, Quad and Audiolab – it certainly has the resources to excel. That solid foundation is obvious in the ZX-2’s engineering content, particularly the drive units.

It wasn’t so long ago that only exotic high-end speakers featured a ring dome tweeter design such as that used here. A conventional tweeter dome is driven around its circumference, leaving the centre of the dome less than fully controlled. This leads to distortion, which we certainly don’t want.

A ring tweeter gets around this issue by firmly locating the centre of the dome and attaching the voice coil part way up it. The resultant diaphragm shape takes the form of a ring, which should give a cleaner and more transparent sound.

The striking pair of 13cm mid/bass drivers looks equally impressive. They have what Mission’s engineers call a DiaDrive cone – a double-layered cone arrangement with a dust-cap-less aluminium outer layer reinforced and damped by a sub cone that is driven by the voice coil.

This configuration is claimed to offer superior control and mechanical drive to more traditional alternatives. Mission has now added extra venting behind the diaphragm to reduce resonances and improve midrange clarity.

Of course, the engineers have also worked hard on the crossover network to ensure that the drive units work together seamlessly. They have also strategically reinforced the cabinet to give the drive units a solid and low noise foundation to work from. It sounds sensible, yet all that work hasn’t resulted in a pair of speakers that make us want to listen to music late into the night.

We use our reference set-up of Naim ND 555/555 PS DR music streamer and Burmester 088/911 Mk III reference amplifier to see what the Missions do when pushed, but also try Cambridge’s CXA81 amplifier to see how they perform with more price comparable kit. Connection is through the ZX-2s good quality single-wire terminals.

Once given a few days to settle, and positioned on solid stands a little into the room, they deliver an agile and open sound. We play The Absence by Melody Gardot – a recording packed with sumptuous vocals and breezy, intricate rhythms. A system needs to be organised, expressive and rhythmically surefooted to shine with this album, and those are areas where the ZX-2s struggle.

While there’s plenty to admire in the way these speakers define individual notes – leading and trailing edges are crisply drawn – they don’t manage to arrange all of that information into a convincing whole. It’s all a little messy and cluttered for our tastes.

We feel the enclosure panels while the music is playing and notice that there’s a lot of vibration coming through from the sides and particularly the top. We can’t help but wonder if that’s the source of the things we’re noticing.

Gardot’s voice is as distinctive and characterful as they come, but through the Missions, she sounds a little insubstantial, diluted of natural warmth and expression. The result is that her vocals come across as though she’s rehearsing the lines rather than fully expressing the passion in the lyrics.

We switch to a pair of B&W 606s and are instantly greeted by a more interesting and entertaining performance. It’s fuller with a greater dynamic punch and with far more rhythmic coherence.

We play Dvorak’s New World Symphony and note the Mission’s even tonal balance and pleasing low-end authority. That pair of mid/bass drivers delivers far more in the way of depth and punch than the slim proportions of the ZX-2s would suggest.

These speakers are capable of rendering large-scale dynamic shifts with conviction, provided you listen at higher volume levels. Once the volume dial turns south they become a little lifeless, which is something to note if you don’t have understanding neighbours.

Once positioned with care we have no major issue with the quality of the stereo imaging either – it’s stable and precisely located. While these speakers have a crisp presentation, they’re refined enough to play aggressive recordings without resorting to harshness. It’s a quality that helps with system matching too, though we would avoid overly forward electronics to achieve balanced results.

But the issues remain. This is a stirring piece of music but through the Missions, it never quite manages to keep our interest. The presentation lacks in dynamic nuance and natural warmth.

It’s fair to say we’re disappointed with these Missions. All the ingredients are in place for the ZX-2s to challenge the best at the price, but they seem a little undercooked. There are glimpses of greatness in the sound, but that’s all they are.