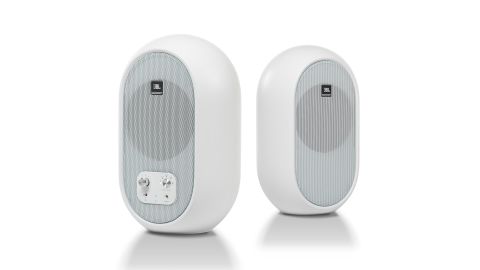 It’s been a while since we were able to recommend a pair of desktop speakers, so we’re happy we can do so with the JBL One Series 104-BT

It isn’t often we are able to recommend a pair of desktop speakers; in fact, it isn’t that often we get to test any. In a world of hot-desking and binge-watching in bed, the laptop is king and so, for many of us, our computer time has no fixed abode.

But headphones can become stifling after so many hours, and the less said about built-in laptop speakers the better. Desktop speakers remain one of the best ways to share your computer’s sound without connecting to a full-blown hi-fi system, and a pair such as the JBL One Series 104-BTs make the experience both convenient and a whole lot of fun.

You can tell the 104-BTs aren’t going to be entirely bookish by their distinctive ovoid design. Available in a black or white finish, these stout and solidly built units each house a 12cm low-frequency driver and 20mm soft-dome tweeter, fired up by up to 60W of combined amplification and tuned by a rear-firing reflex port on each speaker.

But their brawn is certainly not in lieu of brains: these desktop monitors are happy to translate from multiple sources, both wired and otherwise. The BT in the product name relates to the 104s’ Bluetooth 5.0 connectivity, which is in addition to RCA, aux and balanced TRS inputs.

This being a master and slave relationship, all of the action happens within the left speaker, which is also where you find your physical connections. RCA and TRS are on the rear, above the power button and cable socket, while the 3.5mm input is on the front panel.

This panel is where you’ll interact most with the 104-BTs. It has a headphone output and Bluetooth indicator as well as two dials: one for volume and another for input selection. The latter allows you to select input from all available sources as well as just one at a time.

There is a little work to do before you get to that point. The included speaker wire will need to be run from the left speaker to the right, the latter being entirely passive. You get a decent length included in the box, but any non-terminated cable will work if you want your speakers spaced further apart.

JBL refers to the 104-BT as reference monitors, but that could be a little misleading on a couple of points: you aren’t going to achieve the clarity and detail you’d probably like for recording and mixing music, but equally, these are not the entirely staid and sober speakers that description would suggest.

From the moment you plug them in, the 104-BTs are lively and forward; they might be accompanying your study or work time, but that doesn’t mean they’re ready to sacrifice any play time themselves. If what you need is a little motivation and a sing along to make the working day go by faster, then this is the kind of presentation we’d imagine you’d want.

That isn’t to say it’s at all forced, however. These JBLs don’t appear to be pushing anything too far, in order to mask inadequacies elsewhere or otherwise, but they aren’t going to turn down a big beat either.

You also have to temper expectations a tad, given the price: these aren’t the most rhythmically assured or dynamically expressive speakers we’ve heard, but you’re getting a whole system in one for under £200, and for that kind of money they are entirely adequate.

We’re happy with the amount of detail on offer here too. Our only issue in terms of outright presentation is the slight coarseness to the treble and upper midrange. The 104-BTs certainly mellow over time, so you shouldn’t judge them straight from the box, but that polishing of the register never quite reaches some frequencies.

It isn’t unlistenable by any stretch, but it is the kind of thing that can wear you out over the course of a good few hours.

That fatigue will be accelerated somewhat if you play these JBLs loud. Not that you need a deafening volume, but a bit of that all-important bit of sparkle is lost at lower levels, making it tempting to go past halfway.

But there is plenty in the 104-BTs’ performance to make you keep the dial there. A friendly and entertaining performance regardless of input is what we’d imagine most engineers to put high on their list of wants, and JBL has achieved that.

Are these desktop speakers about to transform the entire landscape of computer-based listening? Not quite. But they do have the energy to keep you in your seat and do a bit more work than you might have managed otherwise.