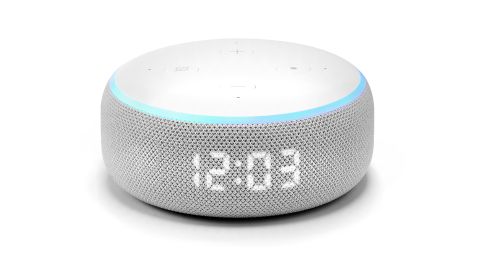 All in all, the Echo Dot with Clock is the best-sounding and most useful such smart speaker Amazon has designed so far

Shopping bags are easier to use than carrying your weekly shop in your arms. But if you’ve ever filled one so badly that it splits and spews your groceries onto the pavement, you’ll understand the value of being a cautious packer.

That’s usually the case with audio technology, too. There’s nothing wrong with packing a product full of exciting features, but the more you add without upgrading or shoring up the design elsewhere, the more strain you put it under. It’s why many more traditional units include bypasses, so your signal only passes through the necessary components, via the shortest path possible.

So with little having changed structurally between the third-generation Amazon Echo Dot and this Echo Dot with Clock ­– apart from the obvious – you could forgive us for assuming that, at best, it would sound the same.

Even if it sounded marginally inferior, we’d perhaps give this Echo Dot a little leeway – because for a tenner more, the clock is actually a handy addition.

Though the previous Echo Dot received five stars for a genuinely good sonic performance – hugely improved from previous generations, at least – this is less a plain wireless speaker and more a technological Swiss army knife.

The headline, though, is that the Echo Dot with Clock is actually the best-sounding Dot that Amazon has produced. The differences aren’t huge, certainly not proportionate to those between previous generations, but they’re noticeable.

You aren’t, of course, going to be met with a sound of great scale or space from this puck-like speaker, but our Echo Dot with Clock undoubtedly shows off an airier and even cleaner presentation. Much of that is to do with a loftier treble response, the kind that, without becoming overly sharp, makes the third-generation Echo Dot sound more than a little cramped.

That doesn’t quite account for the upturn in timing and dynamic expression, though. With cluttered arrangements often sandwiched in by the Dot – you won’t be able to pick out an ornamental piccolo line in a grand orchestral movement – organisation could be somewhat irrelevant.

But there’s no denying the Echo Dot with Clock is more comfortable keeping a tempo as well as offering more rhythmic drive. It’s almost as if that digital timepiece has had a beneficial effect on the music.

Again with dynamics, we’re only ever going to be talking about a certain range, given the Echo Dot’s dimensions, let alone cost, but vocal lines are delivered with a little more interest, there is impetus put on the striking of piano keys, and it plays its part in that keener rhythmic sense, too.

It’s worth bearing in mind that one possible explanation is sample variation. We tested this as much as we could – without filling our rooms with Echo Dots of various stripes, of course – by alternating between the mains power supplies provided with both our Echo Dot and Echo Dot with Clock.

Sure enough – despite them being ostensibly the same design – the presentation of each speaker changed when the mains were swapped. The latter remained superior, but not by such a margin. Each took on presentational elements of the other, and journeyed somewhere towards the middle.

In short, it means there’s no reason to throw your old Echo Dot out – maybe just move it to a different room if you have it beside the bed, and use one of these as the smartest alarm clock you’ll probably ever buy.

The Echo Dot with Clock does all the usual Alexa stuff – controlling music playback, sorting your calendar, controlling compatible smart bulbs and thermostats and reading news and weather reports – but with a clock built-in.

Ask Alexa to set your alarm as you’re heading for bed, then just tap the top to stop it in the morning. It’s as simple as that. Already have a clock in the room you want your Echo Dot? Then change the LED display to show the outside temperature or use it as a kitchen timer.

Of course, we’re concerned with how the Echo Dot with Clock sounds, but that boost in sonic performance is really just a bonus. This is simply the most accomplished, most talented Echo Dot that Amazon has released.