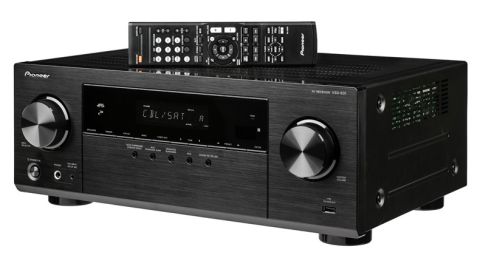 A fast and articulate albeit scarcely featured entry-level amplifier

If capitalism has shown us anything, it’s that money is power. Skew that into a home cinema context and that correlation isn’t necessarily as straightforward – you don’t need to spend much to get a fair bit of muscle, as the entry-level 5.1-channel Pioneer VSX-531 proves.

Delivering a claimed 130W per channel (into 6 ohms) for a rather thrifty (in AV amplifier terms) £250, it’s a decent bedrock from which to begin your inevitable life-spanning march towards surround sound.

Fortunately for novices, the journey required to get the Pioneer up and running is far from arduous.

Plug the supplied microphone into the front panel’s dedicated port and by using the integrated software – in this case MCACC (Multi-Channel Acoustic Calibration System) Auto Room Tuning – you’ll be ready in the time it takes you to put batteries in the remote control and connect your Blu-ray player.

We do just that and find that the final heist scene in crime western Hell or High Water is ideal ammunition to show off the Pioneer’s flair for size and scale.

Revving cars, more stand-offs than a Mexican history book, and a juicy country soundtrack served up by Nick Cave and Warren Ellis fill the soundfield with a compelling presence you might not expect at this price.

With clarity and suppleness lying at the Pioneer’s sonic heart, it convincingly communicates the brooding tension in the bank robbery scene.

Spiky violin strokes poke their head above shimmering cymbals and foreboding cello plucks, and the Pioneer’s concentration never wanders when they merely meander behind the ensuing action.

Just as you’re comfortably situated in the lengthy build up, bullets bolt from gun barrels with the startling punch to make you sit upright, moments later ricocheting off cars and between channels with apt precision and veracity.

Zen in the art of eloquence too, the VSX-531 is just as convincing expressing Foster’s sarcastic jibes as it is his aggressive cursing during the heist.

You don’t need to look up at the screen to recognise Jeff Bridge’s Southern vernacular from True Grit, nor once question the country-vibe vocal as belonging to Cave.

Despite the Pioneer’s consuming soundfield, the more majestic Yamaha RX-V381 takes grandiose one step further with a slightly bigger presentation capable of larger dynamic sweeps, while the Denon AVR-X1300W shows more solidity – most notably in the higher frequencies.

Even without a comparison, the Pioneer feels a little lacking in substance; it’s able to convey the outlines of cymbal hits in the backing track and breaking glass, but doesn’t quite have the wealth of texture to shade them in.

As we move to CD playback, the slicing cymbals throughout If These Trees Could Talk’s Earth Crawler sound fairly tenuous, even if it’s not uncomfortably so.

The droning bass tones, glacial electric riffs and snappy drumbeat all work around each other with enough space to avoid sounding mashed together, and the piece tears along with apt drive and transparency.

Invariably, Bluetooth streaming loses a little cleanliness and organisation over CD playback from our Cambridge CXU Blu-ray player, but despite that it’s tolerably clear and insightful – even when we play low-res Spotify streams.

Pairing is as simple as pressing the Bluetooth button on the remote, and the connection remains stable whether our source is a Macbook or smartphone.

If the Pioneer could talk, it’d probably be reminding you to appreciate the simpler things in life; much like the Yamaha RX-V381, it’s pretty bare skinned where features are concerned.

Rather than boasting the network functionality of the Denon AVR-X1300W, or the ability to decode Dolby Atmos, it simply offers Bluetooth and AM/FM radio alongside a handful of physical connections: four HDMI and single coaxial, optical and USB inputs; three pairs of RCA phonos for connecting a CD or DVD player, for example; and HDMI, 6.3mm headphone and subwoofer outputs.

Aside from HDMI inputs supporting 4K passthrough, the Pioneer doesn’t have much separating it from more basic amplifiers of the early 2000s, but at this price it’s not the end of the world.

However, we can’t help but be perturbed by the centre and surround terminals having spring-loaded terminals instead of banana plugs.

Aside from that practical gremlin, Pioneer has delivered a solid amplifier that can sit at the heart of anyone’s first surround sound system. It’s entertainingly fast and articulate, and couldn’t be easier to use.

But with that comes the question: is it the most complete – sonically and feature-wise – entry-level AV amp out there? The answer is: no, it isn’t.