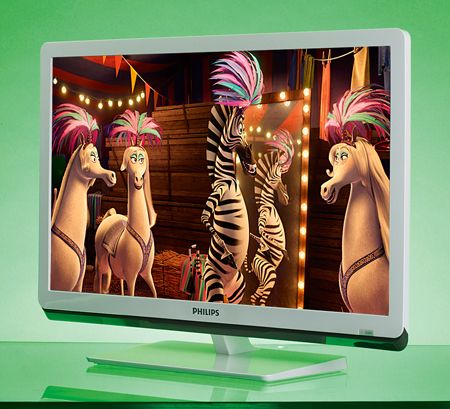 Not the cheapest small-screen TV, but it's one of the best

This Philips 22PFL3517T/12 is one of the most expensive small-screen TVs we've tested, but it's also one of the classiest-looking. The slim bezel and smart stand won’t take over your room (which is how it should be with a small telly, after all), and the remote control is a cut above the budget norm.

It's well connected, too: on the rear are two HDMIs, a Scart socket, composite connections, a VGA input, an Ethernet port, and a coaxial digital audio output. Round the side is one more HDMI, two USB sockets and a headphone output.

Many rival TVs at this size use reasonably stripped-down interfaces for set-up and picture control, but Philips has continued with its tradition of providing hours of fun for settings-tweakers. The interface, while intuitive, can be painfully slow, however – which, when you've that many options available to you, can become frustrating.

Philips 22PFL3517T/12: Picture qualityDuly calibrated with the THX Optimizer Blu-ray, we set to work with some broadcast TV. Jamie’s 15-Minute Meals in standard-definition looks nice and clear, with the Philips offering a vivid yet natural colour palette which makes all that grub look delicious. There’s some blur to motion, though.

Switch to the high-def version of the same programme and the picture cleans up considerably, with the inevitably soft edges sharpened up and colours appearing even more lifelike. Those motion gribbles are still there, but are far less noticeable. Where this TV shines, however, is in its handling of whites – which are clean, bright and crisp.

Philips 22PFL3517T/12: YouTube
This is also one of few small TVs to feature online content – in this case, YouTube. It works well, particularly the intuitive search feature, and HD content looks better than it really has any right to – with crisp edges, smooth motion and realistic colours.

Time for a DVD. We set the Philips to handle upscaling duties from our reference Sony BDP-S390, and it does so with a deft touch. With the remastered Star Wars Episode IV: A New Hope spinning, we’re treated to smooth motion and plenty of detail. Blacks could be more detailed, but it’s a solid turn overall.

Step up to the TT: Closer To The Edge Blu-ray, and the news is even better. There's tons of detail on offer, with lines of rubber clearly visible on tarmac, and the super-slowmo panning shots showing every ripple in the riders' leathers.

Philips 22PFL3517T/12: Verdict
This is an accomplished set, and well worth its five stars. There are small improvements that could be made, sure – BBC iPlayer access and better detail to blacks, for instance – but if you've a suitably equipped Blu-ray player or set-top box, half of that will be taken care of anyway.

We like this set a lot, and we think you will, too.