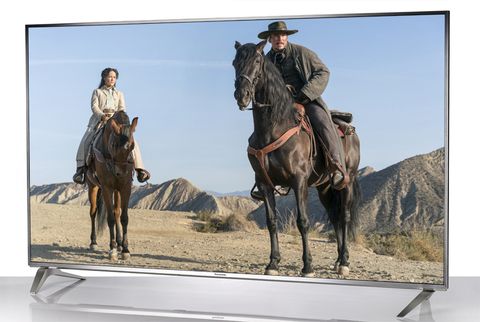 This entry-level Panasonic is packed with high-end features, giving you a lot of television for your money

Panasonic knows how to make a great TV. This much we know for a fact, given the astonishing quality of the TX-65DX902, the company’s 2016 flagship. It left us with the conclusion that the company was back on steady ground after a couple of rocky years.

But what about the rest of the range? Can you get the same quality for less with one of the junior models? Enter the TX-65DX750, which sits near the bottom of Panasonic’s top tier of TVs.

That means you get some of the high-end features without having to pay high-end prices.

It’s a 4K Ultra HD TV, which gets you a resolution of 3740 x 2160 (about 8.3 million pixels). It supports high dynamic range (HDR), which promises greater levels of brightness, contrast and dynamism.

The DX750 is a junior model because it lacks the DX902’s UHD Premium certification. That’s the industry gold star, indicating supercharged levels of peak brightness and colour bit depth. Basically, the DX750 can handle the same video formats as its more expensive bigger brother, but you shouldn’t expect it to blow your socks off in the way that the very best can.

Connections are good: there are four HDMI sockets, two of which have HDCP 2.2 certification, which is what you need to play 4K 60/50p content from external sources like a UHD Blu-ray player or the Amazon Fire TV (2015).

This Panasonic does 3D. That might seem like an odd thing to point out, but now that Samsung and Philips have abandoned it altogether, it’s becoming something of a rarity.

Although generally there is little love for 3D, Panasonic hasn’t abandoned the significant number of people who own 3D Blu-rays. You’ll still need to buy the active shutter specs though – there aren’t any included in the box.

The approach to remote controls is similarly spartan. While the fancy models tend to offer two remotes – one with ‘smart’ features like voice control – here you only get the one. It’s a traditional button stick with an older design but we’ve never had problems with it – the buttons are nicely spaced out, clearly labelled and easy to press.

The DX750 has a nice look, which Panasonic calls the ‘Switch Design’. It’s a fancy way of saying the feet can be rearranged. You can place them close together near the centre of the screen, or far apart at the corners. The latter configuration is more stable but the TV stands firm either way.

This option strikes us as wholly sensible because it caters for those with showroom homes and wide benches, as well as more traditional homes and modest furniture.

We also note this Panasonic stands fully upright, as opposed to the DX902, which leaned back a little. It’s merely an aesthetic point, with little effect on picture performance.

Turn on the TV and you are greeted by Panasonic’s Firefox OS. This is a freshly refurbished answer to the old MyHomeScreen interface, which used to feature on Panasonic's entry-level TVs. It’s no longer cluttered thanks to a minimalist layout that divides everything you do into three options: Live TV, Apps and Devices.

It’s intuitive enough, but there are neat little tricks to help anyway. You can pin your favourite apps to the main page, which saves you the hassle of going into the Apps page at all.

Panasonic’s plasma technology was famed for its ability to offer inky blackness, and since plasma production ceased, the company has put much work into bringing the same level of darkness to its LCD screens.

That effort shows on the DX750. Night scenes are impressively dark, with little evidence of backlighting, and our review sample demonstrated no light bleeding at the edges. As far as black depth is concerned, it’s mission accomplished.

But it comes at a cost, however. In chasing the deepest blacks, Panasonic has sacrificed subtlety. Most shadows offer fine increments of shade but the DX750 struggles to show them off, instead being a little keen to plunge you into the abyss.

The DX750 also has problems juggling those shadows with bright lights. While you lose out on detail in the shadows, you also don’t get the full sense of what’s happening in the bright areas, which suffer from a slight blooming effect.

It’s a pity, but elsewhere the DX750 does a decent job making up for it. We like the way it handles colours, which are rich and lovely to look at, with convincing skin tones.

Footage in HDR looks even better, as you benefit from a wider colour gamut and more subtlety in shading. It’s not the night-and-day difference of watching HDR footage on a UHD Premium TV, but the benefits are noticeable.

As for the level of detail: 4K footage is wonderfully sharp and remarkably clear, showing off all manner of texture without looking overly processed and artificial. The DX750 is a good upscaler too, handling 1080p Blu-rays with minimal noise and without an obvious a drop in resolution.

DVDs are significantly fuzzier as a result, but the overall definition is still perfectly watchable, and we still like those colours.

The audio performance is surprisingly good. In recent times we’ve seen a gradual push back towards quality after years of thin TVs sounding thin – and this is a good example of that. It goes loud but the top end never hardens up.

The midrange is clear and direct, and while there’s not much bass there, it’s enough to add substance to Game of Thrones. For proper movie viewing, however, we’d still advise getting some speakers or maybe a soundbar.

The Panasonic TX-65DX750 is a mixed bag, but it’s mostly positive. It’s fairly well connected, it has a practical design, and its performance is mostly commendable.

We would have liked more subtlety in its handling of darkness, but overall the picture performance is a proficient one. If you’re willing to accept the minor flaws, this is a lot of television for your money.