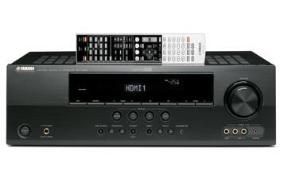 Yamaha Japan has this morning confirmed it's working on a firmware upgrade for the RX-V465, RX-V565 and RX-V765 models to fix the problem, so users will be able to use the HDMI and optical digital connections simultaneously. Further details of how this will be implemented to follow soon.

We've been here before. Last year it was Sony who fell foul of the fact that Sky+ HD boxes only output Dolby Digital surround sound via an optical digital connection, not HDMI, and this year Yamaha has fallen into the same trap.

While testing Yamaha's new RX-V565, RX-V465 and RX-V765 multichannel receivers we discovered that if you connect the Sky+ HD box to the receivers using HDMI for picture and an optical digital cable for audio, the Yamahas automatically override the optical connection and only accept stereo sound via HDMI.

Of course, you can connect the HDMI output from the Sky+ box directly to the TV to transmit the picture, and use the optical digital connection for surround sound to the receiver, but then you can't use the Yamaha receivers for video switching.

Other set-top boxes that use the same dual HDMI/optical connection method as Sky+ HD include BT Vision and Tiscali.