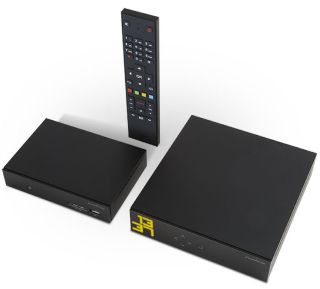 We start with the Freebox Mini, a set-top box which supports 4K Ultra HD. French Internet Service Provider Free is the company behind the box, which it says will be the “first Ultra HD set-top box running Android TV” (beating the Nvidia Shield to market).

It comprises a server, a player and a remote, and thanks to Android TV it offers access to the Google Play store of apps, movies and games.

Free said the box will deliver “a comprehensive suite of streaming, terrestrial, on-demand, and recorded content at up to four times the resolution of current HD television”. As ever, what 4K content will actually be available will be crucial, and details aren't clear at this point.

It will go on sale in France later this month, with subscription packages starting at €30. For the rest of us, we look forward to other companies following suit with similar products.

YouTube could soon be launching its own video on-demand (VoD) service, after a content creation studio representative told Variety magazine that it was “exploring the prospect”.

If YouTube does launch a new service, it will likely follow a similar model to its Music Key service, which gives users unlimited, ad-free access to music videos, as well as 30 million songs on Google Play Music for £9.99/month.

Source: The Next Web

Vaio, once a Sony-owned brand, but now bought by Japanese Industrial Partners (JIP) has unveiled its first smartphone. The Vaio phone features a 5in, 720p screen and runs on Android 5.0 OS.

Other specs include a 1.2GHz quad-core processor, 2GB of RAM, 4G LTE connectivity and a 13MP rear camera. Internal storage is limited to 16GB but there’s a microSD card slot for expansion.

It will initially be released in Japan, with international dates yet to be confirmed.

Rara to shut down or be sold

UK music streaming service Rara could be shutting down as it’s emerged CEO Jez Bell has left the company, leaving it needing to find a buyer to stay afloat. The service isn't currently accepting new subscribers.

Rara was recently bought by Omnifone and paid off its debt. Omnifone is a provider of cloud-based music services to consumer electronics brands, such as Sony’s Music Unlimited service. It also has international licensing agreements with the four major music labels: Universal, Sony, Warner an EMI.

But Omnifone CEO, Jeff Hughes, said: “We are a B2B company - we have no interest in running a direct-to-consumer service.

“We’re not currently taking on new customers and if we don’t find a buyer or someone who wants the assets, eventually we’ll shut it down”.

Sky has invested a further $5 million in 1Mainstream, an over-the-top company that distributes Sky's services, such as Sky News and NOW TV, to other digital platforms. Those platforms include Android TV, Apple TV, Samsung and Xbox. Sky has said the funding is in the form of convertible debt security.

Emma Lloyd, Sky's Director of Corporate Business Development and Startup Investments, said: "We've already seen the real value by extending the distribution of our content onto new platforms and into new geographies. The 1Mainstream team have some exciting new product ideas in the pipeline and we look forward to exploiting those in the future".

Sony has announced it will be releasing a private beta of its PlayStation Now service in the UK this spring.

The service, initially only available in the US, lets PS4 users play PS3 games on their console. It’s reported that PlayStation Plus subscribers will “be among the first” to get access to the new service, but they need to register their interest on the PlayStation website.

Non-subscribers can also register their interest, but won’t get beta access until a later phase. The trial will be free to those who get access and is only open to UK residents.