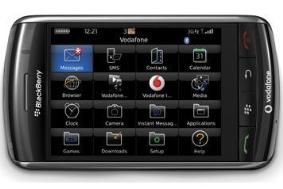 But the company has a new user in mind with Vodafone's Blackberry Storm. The phone is looking to major in audio and video, as well as delivering the familiar email and Internet related services.

The new handset has a 3.25in colour screen with a 480 x 360 pixel resolution. As is the style now, the phone can be held in landscape or portrait profile, making the most of the screen for games and movies. It's compatible with MPEG4 and WMV video files.

In to the bargain there is a 3.2 megapixel camera and – clearly with the iPhone's failings in mind – the Storm can send and receive MMS picture messages, unlike Apple's baby.

On the audio side, the phone is compatible with a wide range of audio formats including MP3, AAC, AAC+ and WMA, as well as the intriguing promise of being able to sync with iTunes.

There's a 1GB internal memory plus a microSD card slot giving you the chance to upgrade to up to 16GB of storage, while other features include Bluetooth v2.0 and A2DP compatibility.

Last but far from least is the Blackberry specifications, which include GPS preloaded with Blackberry Maps and compatibiltity with email, Internet and IM services such as Windows Live Messenger.

We'll be getting our hands on one soon, so look out for more information as you get it...