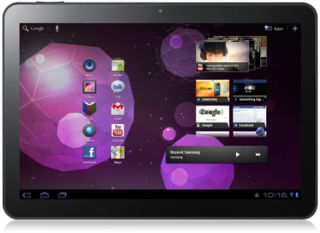 The ban on European sales of Samsung's Galaxy Tab 10.1 has been temporarily lifted while a court decides if the original ruling was appropriate.

Questions were raised over whether the Dusseldorf court had the right to impose an EU-wide ban on sales of the device. However, the ban is still in place in Germany.

Apple is also facing accusations that the document that helped it gain the original injunction appears to misrepresent the device's similarity to the iPad.

A side-by-side comparison of the two tablets features a "squashed" picture of the Galaxy Tab, making it look identical in size and shape, according to the BBC.

Samsung's appeal against the European ban on sales of its Samsung's Galaxy 10.1 tablet will be heard in a Dusseldorf court on August 25th.

The Korean electronics giant is trying to overturn an international injunction brought by Apple, which claimed Samsung had copied elements of the iPad 2.

Apple is also attempting to obtain an injunction in the Netherlands, the only European country not currently covered by the ban.

A decision on the EU embargo is expected within a couple of weeks of the German court hearing next week.

Samsung's Galaxy 10.1 tablet, which went on sale last week, must be removed from sale in Europe and the company must stop marketing it, according to The Daily Telegraph. Customs officers have been ordered to seize shipments of the device.

This folllows a ruling in the Regional Court of Dusseldorf which has granted arch-rival Apple a preliminary injunction against the sale and marketing of the Samsung tablet in all European countries except the Netherlands.

The judge backed Apple's claim that Samsung's Galaxy 10.1 had infringed on its intellectual property and copied elements of the iPad 2.

Although Samsung can appeal against the judgment, the injunction will still stand in the meantime. Any appeal would be heard in about four weeks' time.

An Apple spokesman told The Telegraph: "It's no coincidence that Samsung's latest products look a lot like the iPhone and iPad, from the shape of the hardware to the user interface and even the packaging. This kind of blatant copying is wrong, and we need to protect Apple's intellectual property when companies steal our ideas."

Samsung said in reply: "Samsung is disappointed with the court's decision and we intend to act immediately to defend our intellectual property rights through the ongoing legal proceedings in Germany and will continue to actively defend these rights throughout the world."