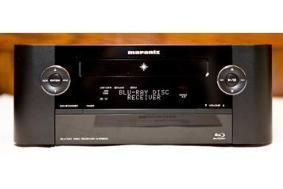 Marantz has released further details of its forthcoming M-ER803 Blu-ray in a box system, due on sale in September for £800.

The latter can be used with the optional RX101 wireless Bluetooth audio module.

We saw a mock-up of the M-ER803 yesterday (shown above), and will bring you a full review as soon as we can get hold of a finished production sample.

Marantz is translating the success of its M-CR502 CD receiver into AV with its M-ER803 system, which combines a Blu-ray player with a 2.1-channel receiver in a single box.

It's just one of the new products being previewed here at the High End Show in Munich, part of a 15-strong line-up on the way this year, and also offers Bluetooth connection of portable music devices and computers.

The former allows streaming of music from computers and iPod/iPod Touch and iPhone, has FM/DAB/DAB+ reception and also access to internet music services such as LastFM and Napster, as well as internet radio.

It also uses established Marantz technologies such as the company's Hyper-Dynamic Amplifier Modules, or HDAMs, and inputs include USB, Bluetooth and optical/electrical digital.

The SR7005 receiver is HDMI 1.4a/3D-compatible, with no fewer than six HDMI inputs. It has 7x125W output, and network audio capability, including streaming/internet radio and DLNA compatibility.

All the Marantz products are due to be revealed at a press event early in June – we'll be there, and should be able to give you more details of UK pricing and availability then.