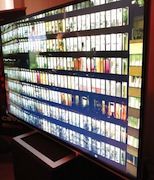 UK pricing and specifications for have been firmed up for the 2013 Toshiba TV range, first seen at CES 2013 at the beginning of the year.

Three new series are due to join the entry-level 1 and 2 Series models already on sale, and three 4K TVs to come later in the year, topping out with an 84in model (pictured above).

All of the new models – in Toshiba's 4,6, 7 and 9 Series – come with Toshiba Cloud TV interactivity (above), going beyond the current Smart TV offering, with features such as a Twitter interface to allow you swift access to the most recommended programmes, and extended smart search for content, and all the Cloud TV models also have Wi-Fi networking built-in as standard.

Like all the new Toshiba TVs they can receive content from a home PC using Wi-Di technology, allow control from Android or iOS devices running Toshiba's MediaGuide app, or record direct to a connected USB hard drive.

And they have that Cloud TV, enabling users to access services including Netflix, Vimeo, Blinkbox and Deezer, as well as existing on-demand services such as YouTube, BBC iPlayer and Acetrax movie.

Toshiba describes Cloud TV as 'an advanced personalised approach to smart TV, with users receiving content recommendations based on their viewing history, dynamically building refreshed lists of content available over the next seven days.

'A powerful search tool explores favourite series, shows, movies, sports programmes and much more that are listed in the connected Electronic Program Guide (EPG) and Video-on-Demand services as well as stored on other devices in the home network.

'Cloud TV also includes a live feed of tweets and updates relevant to the on-screen content, dynamically refreshing alongside the visuals, while social network profiles can be accessed direct from the TV.'

Stepping up from the 4 Series is the Toshiba 6-Series, also LED-lit but with a slimmer bezel, rounded corners to the surround, and brushed aluminium detailing.

All feature the facilities of the models below them - LED lighting, Cloud TV, Wi-Fi, app control and USB recording – and like the 4 and 6 Series models, the 7s have four HDMI inputs including one with MHL support, and two USB sockets.

All the 7 Series models have active shutter 3D working, and come complete with two pairs of glasses, and also offer 2D-to-3D conversion.

The 7 Series will also go on sale in May, but you'll have to wait a bit longer for Toshiba's flagship 4K Ultra High Definition 9-Series, which will comprise a 58in, a 65in and an 84in model when it goes on sale this summer.

Prices are yet to be announced, but the new models will use Toshiba's CEVO 4K multiprocessor to handle 4K content and upscale existing Full HD images, and include Cloud TV and the other features found further down the range.

Completing the Toshiba launch is a trio of Blu-ray players complete with Smart TV functions including YouTube Leanback, Netflix, BBC iPlayer and Acetrax movies, and – in all but the least expensive model – built-in Wi-Fi.

In addition all three models offer DLNA streaming and playback from USB devices, with all but the entry-level BDX2400KB (above) also having Miracast Wi-Fi streaming.

The 'Wi-Fi-ready' junior model is £79, the step-up BDX2400KB adds Wi-Fi and Miracast for an extra £10, at £89, while the £99 BDX5400KB (above) is 3D-capable, and exchanges the matt black looks of the two lower models for a gloss finish with illuminated touch-panel controls.

The Blu-ray players will be available in the second quarter of this year.