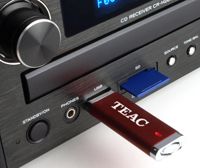 TEAC's Reference range of micro component systems is getting a boost with the arrival of three new components, each designed to combine performance with up-to-the-minute technologies.

The £600 TEAC NP-H750 is a networked stereo amplifier complete with AirPlay and built-in Wi-Fi, while the £300 CD-H750 CD player, also joining the company's Reference 700 series, has both direct digital connectivity for iOS devices and 'direct to USB' recording from disc to USB media. Both of those products are available now.

Next month the Reference 200 series gains the £400 CR-H260iDAB, a CD receiver with DAB radio, Bluetooth, USB port and a dedicated slot to play music from SD card memory.

In addition to that AirPlay and Wi-Fi capability, the NP-H750 has a front-panel USB input with 'Made for iPod/iPad/iPhone' certification, a 3.5mm analogue-in on the front, and an asynchronous USB input for connection to computers to the rear.

There's a choice of wired or wireless network connection, compatibility with MP3, WMA, WAV and FLAC files up to 24-bit/192kHz, and internet radio functionality. Digital to analogue conversion is handled by a BurrBrown PCM1795 DAC.

A second analogue line input is provided on the rear panel, along with a moving magnet phono input, optical and electrical digital ins, and outputs for a single set of speakers and an active subwoofer, plus a front-panel headphone output.

The onboard amplifier (above) delivers 40W per channel, there are tone and balance controls, and the receiver also has sleep and alarm functions. Like all the new components, it's available in silver or black.

The CD-H750 CD player uses BurrBrown's PCM1791A DAC, uses a CD transport designed with a low centre of gravity for stability, and has a USB socket on the front with 'Made for iPod/iPhone' certification.

It can play MP3/WMA files from USB memory devices, can record from CD to such devices at 64/96/128/192 kbps bit-rates, and has both analogue and optical/electrical digital outputs, plus a headphone socket.

Finally the CR-H260iDAB has an onboard 2x25W Class D amplifier, built-in DAB/FM/AM tuner, and – below the CD drawer – those USB and SD card slots.

The USB port is iPod/iPhone/iPad-friendly, the SD card slot can play MP3 and WMA files, and the Bluetooth connection allows music to be played wirelessly from a wide range of computers, smartphones and tablets.